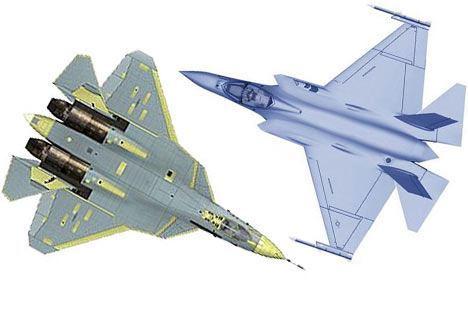 Russia’s fifth generation fighter, the PAK FA, will enter service by 2015, according to Russian Air Force Commander-in-Chief Colonel General Alexander Zelin speaking earlier this week, Defence Talk reports. Almost simultaneously, in 2016, the US will put into service two new fighter versions: the F-35A for the Air Force and the F-35C for the Navy. For the United States, this means that it must at any cost implement its plan to manufacturing the F-35 Joint Strike Fighter.

The advantages of the new Russian fighter were demonstrated to the public at the MAKS 2011 air show – something western experts see as yet further confirmation of Russia’s firm intention not only to produce Т-50 fighters for the Russian army but also to export them to other countries.

Russia announced plans to buy 60 PAK FA fighters by 2020. According to official information, there are plans to put into service 250 fighters and maybe more, western analysts say. India already intends to buy at least 250-300 Fifth-Generation Fighter Aircraft (FGFA) based on Russia’s Т-50 and adapted to India’s demands.

Since the United States stopped producing its F-22 fighter, the F-35 multirole fighter has been the only alternative to the Russian PAK FA available for the US and other NATO countries. At this point, the Russian fighter outdoes its western counterpart in terms of speed, maneuverability, sight range, lifting capacity, and even radar evasion. Russia describes its PAK FA as a fighter that “thanks to the use of complex materials and advanced technology <...> can reduce recognition by radar, optic and infrared recognition systems to a minimum.”

As for the limited optical visibility, experts largely attribute it to use of metamaterials and so-called “e-camouflage” in the more recent versions of the PAK FA. The negative refraction index of metamaterials makes them an ideal means for camouflaging military targets, as they cannot be discovered by radio reconnaissance equipment within a certain range of frequencies. Using this technology, on-board cameras record everything surrounding the aircraft, in real time mode. Supercomputers and metamaterials allow the cameras to project the image on to the aircraft’s surface, making it invisible. A similar effect was used in one James Bond movie, Die Another Day, where 007 was driving around in an Aston Martin invisible to the naked eye.

Being a multirole fighter, the PAK FA can also be deployed to repulse daylight ground attacks. It does not have to wait until night to perform combat operations, as was the case with the now decommissioned American stealth attack aircraft F-117, or perhaps the already mentioned F-35. Being invisible to enemy pilot puts PAK FA in a much more advantageous position. Yet the F-35 has a super sensitive electronic optical recognition system, which, in combination with helmet-mounted displays, allows pilots quickly to detect the warmth emanating from the enemy fighter.

Despite the PAK FA’s e-camouflage technology, Russia should not rest on its laurels, experts warn. The United States also has a fifth-generation fighter capable of competing with its closest analogues, both the Russian one and China’s J-20. Even so, the US will need to accumulate a lot of such aircraft if it wants not only to replenish its combat losses but also to get the upper hand in the fight for aerospace dominance.

Western analysts call on the US Congress to take into consideration Russia’s plans to export its new fighter to other countries. Along with India, potential buyers include Iran (if the UN cancels its embargo on weapons supplies), Arab nations (if the US refuses to sell its fighters), as well as Venezuela, Vietnam, Indonesia, Malaysia, and perhaps even China, given that the PAK FA have a greater bomb-carrying capacity than the J-20, Defence Talk reports.

Thus, conclusions have been drawn but it is unclear how Washington will react to calls for urgent measures.

One thing is clear: Russia’s fifth generation fighter, the PAK FA, is a pioneer in the revival of Russia’s aerospace industry. Russia hopes to retain its position as the world’s leading manufacturer of military aviation equipment, Prime Minister Vladimir Putin said at the MAKS 2011 official opening ceremony.

“The government has supported and will continue to support Russia’s aerospace industry. This is a clear strategic priority for us”, he stressed.