“I lived in a volcano of geniuses” 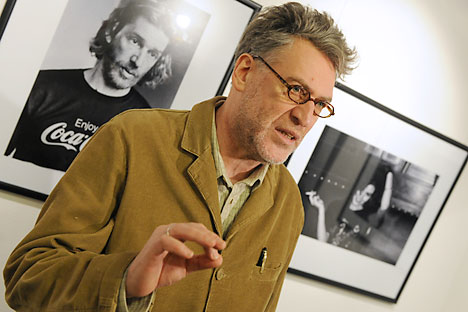 It doesn’t take many words to describe Artemyi Troitsky: he’s only the most respected critic of pop-rock culture in Russia. He is an invaluable networker among Russian artists; he’s written books and organized concerts. In recent months, however, his name has appeared in the headlines for other reasons – he has started to get involved in politics and has even been sued for defamation. Troitsky says he belongs to no political parties and has been forced by circumstances to take part in civic engagement. He sat down with Russia Beyond the Headlines’ Fran Martinez to talk about politics, music and his history in the industry.

Russia Beyond the Headlines: Looking back to the 1980’s, how would you describe the underground Soviet rock?

Artemyi Troitsky: In general, I consider that all rock music is folk. In fact, most of rock music is not written by professional composers, but by street boys, as we can see with the greatest examples of The Beatles, Frank Zappa or Pink Floyd. So I believe that rock is the 20th century folklore.

The same I can say regarding the Russian musicians. Andrei Makarevich is an architect; Boris Grebenshikov, a mathematician; Yury Shevchuk, a painter. Kutuzov was also a mathematician, and so on. They were not professional composers of music.

Moreover, to describe the Russian underground, I would describe it as bard songs combined with folklore poetry. Another feature is that they were opposed to the official dogmas of Soviet culture.

RBTH: But in fact, the Soviet underground was not merely about music; it was a wide social movement. Slang, samizdat and rock clubs were a part of this broad phenomenon, but what was the core of the movement?

A.T.: The desire to be free, to have fun and to be different, also to escape from the great uniformity of the Soviet society. Official cultural life was so boring, hence we wanted to show that we were different, that we didn’t follow these rules which no one believed in. The way we dressed was also important.

RBTH: Then, the political change came in an unexpected and peaceful way; are you optimistic about the improvement of the political situation in today’s Russia?

A.T.: Things may or may not change, but I am a strategic optimist. I lived the greater part of what may be called my unconscious life in the Soviet era, and I could not even imagine in 1983 or even in 1985 what would happen to my country few years later. History has in store a lot of surprises for us, including pleasant ones.

Regarding the second part of the question: the only attempt at a peaceful uprising in my country was made in December 1825 and, as is known, it proved ill-fated. There has been nothing peaceful since then. Nevertheless, I believe that there could be, with an inner regeneration of the elite.

RBTH: Which bands from that time can still be listened to and understood, which have developed over time?

A.T.: The problem of Russian rock is that, for many years, it was merely a copy of Western rock. They were imitating, just making covers. So, most of the Russian bands don’t sound modern, their music is just a document of the time. As an exception I could merely suggest Kino or Zvuki Mu.

RBTH: Who is the most impressive artist you've ever met?

A.T.: I lived in a volcano of geniuses, but if I am forced to choose, I will select two who are probably not so well known to the Western audience: Alexander Bashlachev, who was a real rock poet. He wrote lyrics almost at the level of Pushkin, Mayakovsky or Mandelstam, and he gave very energetic performances. He was really charismatic.

The other one is Sergey Kuryokhin. He was a jazz musician, a composer of contemporary music, with an incredible personality. Unfortunately, both disappeared too early: Bashlachev committed suicide in 1988, and Kuryokhin died of cancer in 1996.

RBTH: What would you recommend to foreigners interested in starting to listen to Russian music?

A.T.: I’ve to say that in the last few years, a new interesting generation has appeared. For example, Mumiy Troll; Or Barto, a Moscow band creating electro-punk; Also Kira Lao, from Novgorod, or some electronic music from Yekaterinburg.

RBTH: Right now, you are unfortunately involved in five lawsuits for defamation; although admittedly these lawsuits could be politically motivated, why are you so tough on artists who collaborate with the government?

A.T.: I'm not necessarily against collaborations between rock artists and the establishment - if it's sincere. But the Russian government is notoriously corrupt and evil, so it's a shame to make deals with such guys.