In pursuit of quality 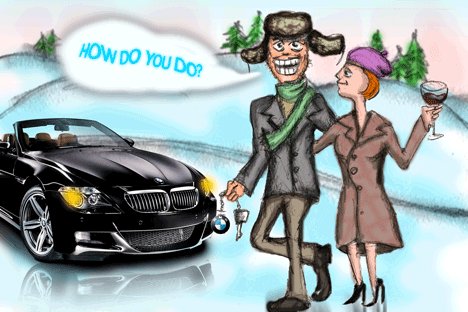 Why do Russians love to buy the best stuff in the world, but can’t produce it themselves?

One of the favorite sayings of the new generation of global Russians is “Speak English, dress Italian, drive German, kiss French, be Russian.” In spite of the fact that, like the rest of our global village, we have to replace some of these with “Chinese,” the passion of Russians for having the best of everything cannot be overestimated.

When the Apple iPhone first appeared on the market – before anybody could predict that it would capture one-third of mobile market in most of developed countries – it was Russians who created one of the biggest “gray” markets of iPhones in the world, carrying them in suitcases from the U.S. and Europe. The first iPhone has never been officially sold in Russia, but three months after the launch in 2007, analysts estimated that there were at least 400,000 Apple handsets in our country. And four years later, a Russian guy was the first to get the shiny iPad 2 after standing in a long-long line on Fifth Avenue in New York. This is only one sign of Russian passion for the best products.

But it wasn’t always like that. In the Soviet Union, people didn’t have foreign products –not only because the tyrannical Soviet leaders wouldn’t allow them to leave the country, the Iron Curtain and all that stuff; the “Made in USSR" label was also a sign of good quality, and for some products even the assurance of immortality (unbelievable in today’s consumer society!). Unfortunately after the collapse of the Soviet Union, a lot of production lines in Russia were stopped. And now we have to start most of them from scratch.

This work has already started. Despite not having a decent Russian make of car, decent Russian computer brand and decent Russian soccer team (the worst of all!), we have become one of the world leaders in making sophisticated industrial lasers (IPG Photonics), anti-virus software (Kaspersky lab), nano-microscopes (NT-MDT), optical character recognition systems (ABBYY software) and so on.

The problem is that to make people’s lives easier, you have to start producing everyday products of good quality. And Russians can’t believe in the quality of domestically produced products right now. If you accidentally come across Russian advertising, you will see a lot of “German quality,” “Italian style” or “American traditions” labels. It will be very hard to overcome the stereotype that Russian products = bad quality in the minds of Russian – let alone in the minds of foreigners. But the mission is not impossible.

Like most people I have a dream. And to get back to the saying from the beginning, my dream is to dress Russian, drive Russian, eat Russian and have an “iRussianPhone” without feeling that it’s lacking the quality of foreign products. In order to change something, you have to start with yourself. Not only you should WANT to have everything the best – you should also MAKE everything the best.