Siberian pel’meni: you can’t make too many 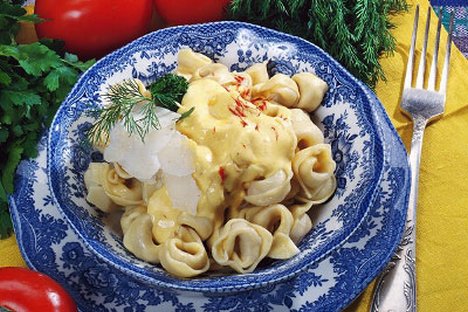 My friend Susan casually asked me if I knew how to make Siberian pel’meni, which she, with all the innocence of someone who has never attempted it, wanted to make. “My daughters had a Russian nanny who used to make them these incredible meat dumplings,” she said, “and after she left us, we haven’t really found anything else they like quite so much.”

I could not imagine clever, chic, artistic Susan, who works as a TV producer, up to her elbows in flour and pel’meni filling, nor indeed, that Susan could spare an entire day and a half to give over to the process. Pel’meni and Susan didn’t seem like a match made in heaven when I looked at it objectively. Susan’s life little resembles that of the women of the ancient Finno-Ugric tribes who brought pel’meni to the Ural Mountains: although she’s often on the go, she’s not on the move; and she is not obligated to carry her food supply on her back, so it doesn’t really matter to her that pel’meni could protect her family from animal predators because the dough on the outside of the dumpling, masks the smell of the meat inside, which was one of the early appeals of pel’meni to the local tribes of the Ural Mountains. The climate Susan lives in (Fulham, London) doesn’t get cold enough to provide the flash freezing capacity, which made pel’meni such a hit with Siberian housewives, who gathered after an animal had been slaughtered to create an assembly line Henry Ford would have envied: parlaying the fresh meat and simple dough into hundreds of delectable pel’meni, which they then buried in the snow, instantly locking in the freshness thus stockpiling sustenance for the long Siberian winter ahead. But then again, I thought, Susan is a mother, and mothers through the ages have known that you’ll never be stuck if you have some frozen pel’meni on hand: be they buried in the -40 degree Siberian perma-frost, or tucked in the back of your SUBZERO freezer. So, Susan, if you can find a two-day break in your hectic life, here is your pel’meni recipe:

If you are going to go to the trouble of making pel’meni, so the Russian saying goes, you might as well make a lot. And, take your time, because, “pel’meni ni terpyat speshki,” or pel’meni don’t tolerate rushing. And, take a leaf from the Siberian villagers, rope in some like-minded friends, and make it a community effort.

A pinch of marjoram or spices to your taste (note: classic Siberian dumplings do not have any spice, but rely on the garnish to give the dumplings their flavor, but the Baltic version of pel’meni does include marjoram, and I think it adds much to the meat, so I include it here.)

To make the dough: Sift together the flour and the salt in a large bowl. Create a shallow well and add the eggs and the water into the flour. Work the dough together and turn out on a floured surface, kneading with your hands until the dough holds together. Cover with a bowl and leave to set for an hour.

To make the filling: For ancient nomadic women, this was the labor-intensive part, as they minced the meat into tiny slivers. I used my food processor, which took about 45 seconds. Process the meat, onion, salt, and spices together in the food processor until smooth. Cover and set aside.

To assemble the pel’meni: At this point, I put “pasta roller” on the list of things I wanted for Christmas, and if you have one, by all means, dust it off and use it. I rolled my dough out with a rolling pin until very thin (no more than 2 millimeters). Using a cookie cutter or the rim of a glass cut out circles approximately 7 cm in diameter. Into the center of each circle, place a ball of filling. Fold the dough circle in half over the filling, and crimp the edges together. Then fold the crescent into half again, and pinch the two edges together to form the final dumpling. The comprehensive web site dedicated to the history, art, and traditions, pelemeni.ru notes a time-honored tradition of sneaking a “surprise” into the last pel’meni of the batch: and the one who gets this dumpling, receives the good fortune implied by it: a small coin for wealth, sugar for love etc.

To cook the pel’meni: Bring a large pot of cold, salted water to a vigorous boil. Add a tablespoon of oil to the boiling water, and then drop the pel’meni in, one by one, taking care not to overcrowd the pot, and keeping the pel’meni from sticking to one another. Cook for 4-6 minutes, or until the pel’meni bob up to the top of the water. Drain.

To serve, garnish, and eat pel’meni: Siberians eat pel’meni with tangy vinegar and hot mustard; Russians in the western part of Russia smother them with melted butter or sour cream. Pel’meni are also often served in broth as a soup, in which case the cooked pel’meni are gently lowered into the hot broth, and stirred gently to warm them through, serving immediately.

Recipe adapted from A Gift To Young Housewives by Elena Molokhovets’ and A La Russe, by Darra Goldstien.