The (second) first day of school 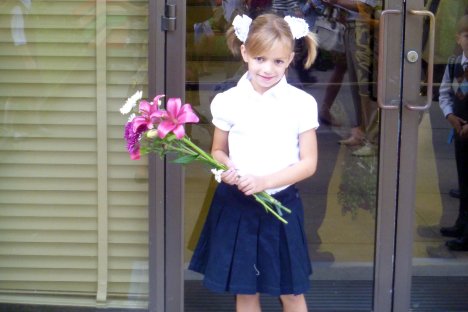 Photo of Lily by Lara McCoy

For bilingual children, the beginning of September means another year of balancing expectations and assignments in two language and two educational systems.

Some parents raise bilingual children by each speaking a different language to the child; others allow their children to learn by osmosis, through living in a foreign country or having a nanny who speaks a different language than the parents; some parents hire tutors or sign their children up for after-school classes. And then there are parents like us, who approach bilingual education with a fervor sometimes known as “the zeal of the convert.” This philosophy, combined with the experience of moving to Moscow with a few semesters of college Russian, is how, on the morning of Sept. 1, two American-born adults with no Russian ancestry, arrived at the gates of the Russian Embassy, hand-in-hand with two little blonde girls wearing white blouses, navy skirts and enormous white hair bows.

There is no place in Washington that reminds me more of Russia than the courtyard of the Russian Embassy on Sept. 1. Maybe it is because this scene, this unique mix of big party and solemn occasion, plays out in the same way on the same day all over Russia. There is no such uniformity on the first day of school in America. To begin with, the first day of school in the United States isn’t even a single day. The children don’t bring flowers to their teachers; the principal doesn’t make a speech. You show up, the bell rings, class begins.

After the celebratory mood of the first day wears off and the long evenings of homework after homework start, my husband and I often ask each other why we do it, why we chose for our daughters to go to formal Russian school and study the Russian standard curriculum rather than just taking language classes or speaking to their nanny. There are perfectly acceptable answers, like the fact that our girls have been bilingual from birth and we don’t want them to lose the language or the many benefits of bilingualism. There is our desire for them to be literate, unlike some heritage speakers we have known who speak just fine, but can’t read or write very well. And there is the thought that if we ever do move back to Moscow, they will be ready to go straight back into Russian public school. Honestly, we probably chose this particular program because we considered it the very best and it had the added benefit of being walking distance from our house.

But we keep with it because of another reason, one we didn’t grasp at first: The understanding that being bilingual only goes so far if you aren’t bi-cultural as well.

Katya and Lily on the first day of American school. Photo by Lara McCoy

Since my daughters started Russian school, I have a much more intimate understanding of my Russian friends. At one publication I worked for in Moscow, our small team would have a cookout in the forest every summer. While waiting for the meat to cook, my co-workers would always play games. One in particular involved literary references. It was kind of like charades, but harder. No matter how good my Russian became, I could never play. I simply didn’t have the cultural references. And I wondered how it was that they all knew the same plays, stories and poems. Last spring, listening to the seven-year-olds in my daughter’s class recite Pushkin and distinguish between the works of Lermontov and Tolstoy during the ceremony that marks the end of their study of the alphabet, I finally understood.

...and the first day of Russian school

Likewise, I always found it strange that from the second day of my Russian language class – in graduate school – we had to read and write in cursive. How useful would that be? As it turns out, it was very useful. Every document posted to the door of my Moscow apartment building, every note that came across my desk, was written in the same neat cursive. But how is it that all Russians have exactly the same handwriting? Watching my daughter copy page after page of small round letters every night for six months, I knew.

It’s possible – even easy – to argue that putting my daughters through the process of learning two curriculums in two languages through two completely different educational philosophies will do more harm than good – that they will be behind in both languages, that their self-esteem will suffer, that they will have a confused sense of identity.  I prefer to believe that the benefits of being able to seamlessly move between two languages and cultures will far outweigh whatever challenges they face in the process, that it will give them opportunities I didn’t have.

And so, every Tuesday and Thursday from September to June, I pull the car up to a pair of tall, black gates just off Wisconsin Avenue.  My daughters get out of the car, walk up to a speakerphone, give their names and disappear. If someone has forgotten her backpack, or her snack money, or her homework, it is too late. I do not have permission to follow them. There is no stranger feeling than watching your child go through a gate you cannot enter. And yet, that’s what parents do. One way or another – soft nudging, cheery encouragement, physical pain – we bring our children to the doors of the experiences that shape their lives. But only they can walk through.