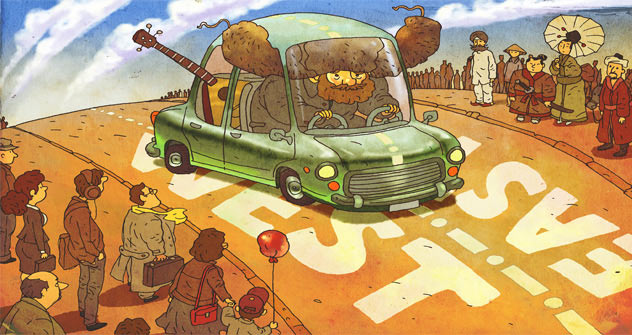 Is Russia a European or an Asian country or something in-between? The decades-old debate is still at the heart of Russia’s quest for an identity in the globalized world of the 21st century.

In 1939, frustrated at his inability to predict Russia’s actions, British leader Winston Churchill famously said, “Russia is a riddle wrapped in a mystery inside an enigma.” Less well remembered was what he said next: “But perhaps there is a key. That key is Russian national interest.”

Seven decades later, Russians are still trying to unlock the enigma of their future by figuring out where their interests are. Indeed, for centuries they have faced a conundrum – whether to build closer links with Europe or pursue their destiny in Asia.

This East-versus-West faceoff is in the backdrop of the reality of geography – Russia is among a handful of countries, like Turkey and Egypt, that straddle two continents. Until 1867, the Russian Empire extended across three continents, including North America, where it had colonies in Alaska and Northern California.

But it is this split between Europe and Asia that has shaped Russian identity and politics. Over the centuries, the balance of power in Moscow has constantly shifted between the Europhiles and those who wish to chart an independent course.

This was most famously played out during the reign of Peter the Great, the most European of Russians. So obsessed was the tsar with modernising his country that he taxed Russians wearing beards because European men were generally clean-shaven. Peter gave the country an unmistakably European flavor, and yet nearly three centuries later, it seems nothing much has changed. Europe continues to hold a perennial fascination for some Russians, who want to see their country firmly anchored in the West. As proponents of Big Europe, they see Russia as a bulwark against the hordes from the East, and have kept up a steady refrain demanding membership of the European Union and NATO.

But despite the ardency of Russia’s wooing, Europe has been rather cold to it. Back in the 1980s when Mikhail Gorbachev proposed his “Common European Home,” sociologist Ralf Dahrendorf was among those who quickly shot down that idea. In his book "Reflections on the Revolution in Europe,"Dahrendorf writes: “If there is a common European house or home to aim for, it is not Gorbachev’s but one to the West of his and his successors’ crumbling empire. Europe ends at the Soviet border, wherever that may be.”

Dahrendorf defined Europe as a political community where “small and medium-sized countries try to determine their destiny together. A superpower has no place in their midst, even if it is not an economic and perhaps no longer a political giant.”

However, such cold-shouldering hasn’t lessened the ardor of the Europhiles like President Dmitry Medvedev, who belongs to a new generation of Russian leaders that advocate the Common European Home theme.

On the other hand, Prime Minister Vladimir Putin belongs to the more nationalist school; he seems more comfortable at Shanghai Cooperation Organization and BRICS meetings than he is at the G8. “The West treats us like we just came down from the trees,” Putin once remarked.

These contrary pulls suggest Russia has never quite decided if it is a European or an Asian country. East and West co-exist starkly in a country that may have been founded by the Vikings; is ethnically 80 percent European; and which shared a patron saint, Andrew, with Scotland. And yet the multi-colored onion domes that dominate Red Square are reminders that the country was once part of an Eastern empire.

This confusion has led to some serious foreign policy setbacks, such as the loss of its East European buffer zone and a major client in Iraq. Here Russian interests were sacrificed because the pro-West elements mistakenly believed they could buy America’s goodwill. The nationalists are also aghast at what they see as Moscow’s abandonment of Libya and Syria.

Nikita Khrushchev, not exactly famous for uttering profound statements, did make at least one memorable remark. During a state visit to India in 1955, he said: “Our country is both European and Asiatic – the largest part of our territory lies on the Asian continent.” It was a statement that reverberated across a newly independent Asia. Khrushchev was only iterating what his former boss, Joseph Stalin, once told a Japanese diplomat: “Russia is an Asiatic country, and I myself am an Asiatic.”

Such a hard sell may have only limited impact in modern times. Still, at a meeting on Hainan Island in southern China earlier this year, Medvedev said: “Russia's future, the modernization of our Siberia and the Far East are inseparably connected with the Asia-Pacific region.” He admitted Moscow had no choice but to strengthen and develop its relations with countries across the region.

Russia’s advantage in Asia is its history of benign colonization. The Russian empire was not essentially exploitative, but instead greatly benefitted the conquered peoples of Central Asia and Siberia. For instance, it prised the Turkic nations of Central Asia out of the Ottoman Empire’s grip and modernized them. Without Russia there would be no cosmodrome in the Kazakh steppes, which was built without diluting Kazakhstan’s culture, language and religion.

In the modern era, a Mongolian became the first Asian to travel to space solely because of Mongolia’s ties with Russia. Detractors might quibble that Mongolia was a client state, but wasn’t Pakistan America’s client for over six decades? Despite the strong military partnership between the two countries, how many Pakistanis have traveled to space in an American shuttle?

Geopolitics in purely Western terms means cold calculations with no emotional strings attached. The over long bombing campaign over Libya with scarce concern for the Libyan people is the most recent example of that. In contrast, Russians showed amazing restraint in the 2008 Georgia war and even in 1945 when Marshall Zhukov’s soldiers did not indulge in retaliatory killings in Berlin. Indeed, it can be argued that Moscow’s foreign policy is influenced by a sense of ethics, which is uniquely Russian.

Russians may belong in the West, but they are Westerners with an emotional bent. With half of Europe and half of Asia within its boundaries, Russia will always be a dish made of both ingredients.