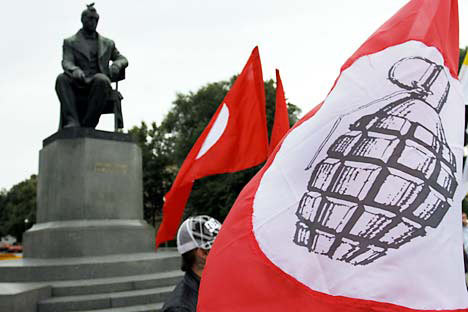 The main election theme is becoming the opposition’s joint struggle against a possible falsification of election results.

In the beginning of the parliamentary campaign, a new theme is making its way to the foreground. Political parties’ criticism of their competitors is becoming increasingly overshadowed by the demand to make it a clean procedure. It is here that all of the opposition is finding a common ground. United Russia has picked up this slogan. And the head of the Central Election Committee (CEC), Vladimir Churov, announced yesterday that the number of polling stations that are being equipped with video cameras is rising. However, United Russia’s opponents do not believe the CEC’s calming statements and are accusing United Russia of an imminent falsification of campaign results. Nezavisimaya Gazeta’s (NG) experts, while pointing out the importance of the opposition’s attempt to unite, consider this phenomenon a reflection of the maturity of the Russian electorate.

The opposition, like quicksilver, is trying to unite in the struggle against a common enemy – the ruling party. On August 23, the Just Russia party offered to the communists to form an alliance of leftwing forces. And on August 30, the CPRF, the Just Russia party, the LDPR and Yabloko signed a memorandum titled “On Cooperation To Control the Elections.” Ideological differences are being sidelined and replaced by the basic math of elections – the desire to ensure a fair count of votes at any cost.

The CPRF, a longtime rival of the Socialist-Revolutionary Party, recently supported Just Russia leader Sergey Mironov’s proposal to equip polling stations with web cameras, ensuing direct broadcast of the elections – and mainly to save the video footage of the procedure.

“As for web cameras, I’ll be brief: We are all for it,” said the first deputy chairman of the CPRF, Ivan Melnikov. “Today, this technology is not a luxury. Those who will want to violate the law will be at least a lot more restrained in their actions.”

The same idea was pushed forward in May by Mikhail Prokhorov. The CPRF, while criticizing the leader of the Right Cause party, even then reacted to his initiative with understanding.

United Russia is clearly irritated by its political rivals’ efforts. The first deputy secretary of the party’s General Council, State Duma Deputy Andrey Isayev, said that the opposition’s attempt to form a coalition against United Russia is unconstructive, “because the voter loses the opportunity to understand the specifics of other political parties’ agendas.”

“The actions of the entire Russian opposition are opposition to the United Russia party,” said the deputy secretary of the Sverdlovsk branch of the United Russia Political Council, Roman Chuichenko. “A constructive dialogue between political forces remains impossible.”

Isayev, for his part, argues that, “We have the support of the majority, a real political agenda.”

However, the People’s Front agenda will be approved during the party congress. Besides, how interesting are these documents to the voter? Levada Center Director Lev Gudkov highly doubts that they would be. In his interview with NG, he argued: “The parties’ political agendas are indeed of little interest to the people, just as the politicians’ ideological views,” he told NG. “But the electorate is maturing. The electoral institution has been highly discredited. And the main thing is not how good the candidates are – who is a demagogue, who is leftwing, who is rightwing… The very form of conducting elections is being questioned.”

Meanwhile, notes the expert, under the notion of “falsification,” people are not implying issues concerning ballots as much as the pressure of the ruling party’s administrative resources, the opposition’s restricted access to television, and the denial of registration applications. “Our surveys show that citizens view these facts as an element of manipulation of elections,” he said.

According to a member of the Carnegie Center in Moscow, Nikolay Petrov, the opposition’s desire to form coalitions is a reflection of its concern regarding its future. Party leaders, says the expert, understand that the People’s Front, thanks to its participation in Prime Minister Vladimir Putin’s campaign, will most likely collect about 65 percent of the vote. “Parties feel as if they have been robbed ahead of time,” he said. “Thus the struggle against the common enemy is a lot more important for them than ideological differences.”

The opposition understands, said Petrov, that “in the event of major falsifications, the election results of the communists as well as the LDPR, who could only really hope to pass into the State Duma, will be substantially lower.”

“The situation on Okhotny Ryad may be the same as in the Moscow parliament during the 2009 election – United Russia plus a couple of communists. And that is something United Russia’s competitors are afraid of,” said Petrov. “Moreover, they see that nothing is being done to stop this scenario from taking place.”

Medvedev’s statements, says the expert, do not indicate that the elections will be relatively fair. “And that is a signal to the opposition, which has decided to protect itself by its own strength,” he argued.

While agreeing with Petrov’s take on the changing nature of election campaigns, the head of the Effective Policy Foundation, Gleb Pavlovsky, disagreed on the reasons for the parties’ desire to unite. “Medvedev has an official position regarding parliamentary structures’ complaints about the administrative resource,” he said. “The parties are hoping for the president’s patronage.”

On another hand, says the expert, the number of active groups, “which are an additional component of civil control of the election process,” has risen. “They will hardly be involved in supporting one particular party,” he added.

The campaign has shifted direction, says the chairman of the Institute of Modern Development, Igor Yurgens, and the opposition is clearly striving toward unification.  “Personal attacks are giving way to solidarity interests,” he proclaimed.

NG’s source stressed that the present model of the country’s economic and political development has become obsolete. “In the last couple of years, certain United Russia ideologists were saying that the system has been developed and will not be corrected,” he said. “On the highest level, it was said that there is the ruling party and two or three allowed parties in the parliament. And that is enough to control the society.”

But the economic system began to falter, says NG’s source, and it became clear that it is unable to feed us as it has before. “Therefore, the question of reforming the political system arose,” he said. “The People’s Front’s slogans grate on the ears of not only the population, but also the opposition parties. Leaders of these structures understand that they will not be able to increase their potential in the State Duma unless the alignment in the lower house changes – they have nothing to lose. Therefore, they are more interested in minorities such as the Right Cause, who will make it possible for them to make some decisions in the parliament.”

The opposition, argued Yurgens, understands that unless the status of “the place for discussion” returns to the State Duma, it will not have any success.