Welcome to the Comedy Pet Theater 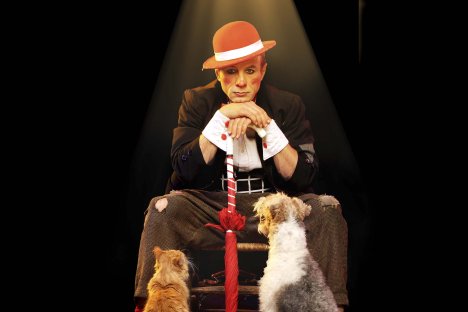 The Comedy Pet Theater headed up by Gregory Popovich is an oasis of classical circus on the Las Vegas Strip. With a show filled with rescued pets - cats, dogs, a parrot even - he creates a piece of traditional Russian circus with his trademark juggling while balancing on a two-pronged ladder.

"I am fourth-generation circus performer," he remarked backstage while getting ready for his afternoon show. My great-grandparents started performing before the Russian Revolution. Both my parents were jugglers, and I had my first performance by myself with my ladder and my juggling when I was 13. Most kids at that age would come out with their parents and show off some tricks, but I was already started on my circus career."

Life as a kid in the circus was fun, he explained, even though he changed schools every two months, he spent the rest of his time practicing his juggling for three hours a day, or playing with the animals, and the rest of the circus kids.

"The circus in Russia used to be financed heavily by the government, alongside the ballet and sports. Now it doesn't get much government money, so it's on a downswing. On the other had, the circus in America is on an upswing, because of Cirque du Soleil and all the money they have put into marketing their show."

The public still lines up to see the Comedy Pet Theater, which is now seet to go on a west coast tour. The most interesting thing about his show is that his several dozen animals are all rescued from animal shelters, and, he has published his own uniquebook on how to train cats to do tricks.