Abkhaz elections show the republic will continue to rely on Russia 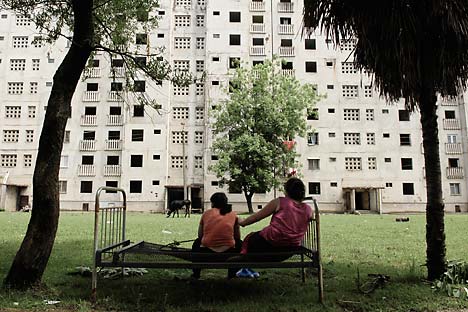 Abkhazia is now in a state of neglect. Source: Redux / EastNews

Little is expected to change in the former Georgian territory as the republic will continue to need influxes of cash from Russia.

Abkhazia is a subtropical patch of land on the Caucasus Black Sea coast. A popular holiday resort in the Soviet times, it is now deserted. The country was damaged heavily during the armed conflict with Georgia in 1992-1993. Most Abkhazians have Russian passports and are thus eligible to vote in the Russian presidential elections, but the locals are much more interested in the election of their local leader.

To a visitor, the elections present an odd picture: people come to the polling stations and line up starting early in the morning. The crowd of voters, which includes many old people and veterans, is kept under control by the police. “Don’t smoke, how many times do I have to ask you?” a young female police officer moans.

“I called Ankvab a week ago and said I would vote for him,” said Evgeny, who was born in the Abkhazian capital Sukhumi and has returned to his hometown after retiring. This kind of personal contact with officials is not something new for Abkhazia. Ankvab’s predecessor, Sergei Bagapsh, liked to talk to ordinary people. Informal meetings were held at a small waterfront café not far from the presidential administration building. The president would sit down to a table, order a cup of Turkish coffee and light a cigarette. Anyone in the café could join him for a talk. The place is still always full. People smoke, drink coffee, play backgammon, chess, checkers and dominoes. The coffeehouse is where rumors are traded and, since trustworthy opinion surveys have never been conducted in the republic, the candidates’ ratings are determined by what is said at the tables here.

Although Russia helps Abkhazia conduct elections by organizing the work of the press center and travels by foreign observers, Abkhazia’s electoral process is in some ways superior to Russia’s. The ballot boxes are transparent, and a stamp is put in the voter’s passport. It is impossible to delete the “against all candidates” box from the ballot because Abkhaz citizens vote not “for” but “against” candidates. Every voter gets a ballot from which he crosses out the names of candidates.

After the voting, people gather in front of polling stations, looking in the windows, watching how the votes are counted and at the candidates’ headquarters. The official election returns are announced at noon the following day, but the results are usually known at campaign headquarters five hours after the polls close. This time around, many people gathered in front of the headquarters of Ankvab’s opponents, Raul Khadzhimba and Prime Minister Sergei Shamba. Before the elections, the prime minister warned about possible vote rigging and threatened to take people out on to the streets if he were defeated.

That threat is taken seriously in Abkhazia. In 2004, Sergei Bagapsh, who lost the election to Khadzhimba, accused the election commission of fraud. A confrontation between the candidates ensued. Their supporters alternately stormed and occupied office buildings. Human rights activist Tamara Shakryl was killed by a stray bullet during one such fight. The council of elders resolved the showdown by forcing the opponents to form a coalition, in which Bagapsh became the president and Khadzhimba the vice president. This time a clash was avoided and Shamba and Khadzhimba congratulated Ankvab on his victory after the results were announced.

In general, the candidates’ electoral programs differ only in nuances, as the voters are far more interested in the individual’s background and actions than his thoughts about development of the country, which is, anyway, a Russian satellite. So Ankvab’s image played into his hands. A former policeman, who survived five assassination attempts, he is regarded as a ruthless and secretive man who has what it takes to bring order to the country.

To many Abkhazians, he is similar to the Russian Prime Minister Vladimir Putin. How much Ankvab actually resembles Putin is something the people in the republic have yet to learn, but the Russians already know the answer to the question that most concerns them. The president-elect thinks Abkhazia will need injections from the Russian budget for another five to ten years, that is, for one or two presidential terms.