Not even fog and war can ground Ka-52 Helicopter 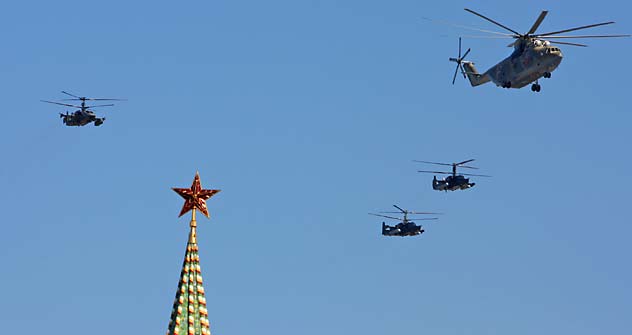 Export shipments of Ka-52 Alligator might start in the near future.

Yury Denisenko, managing director of Progress, the local helicopter plant, knew that even the fog was unlikely to spoil the day. His plant, one of 10 units of state-owned defense contractor Russian Helicopters, was celebrating its 75th anniversary with a demonstration flight of its latest attack helicopter, the Ka-52 Alligator, which can fly in any weather, Denisenko said. “The Ka-52 can fly in the fog. It’s an all-weather helicopter equipped with all the appropriate systems,” he said.

The Ka-52, whose serial production started at Progress in 2008, is among the aircraft to be shipped to the Defense Ministry in the next 10 years as part of the government’s 20 trillion ruble ($683 billion) plan to re-equip the armed services by 2020.

The ministry ordered more than 140 of the helicopters and signed a contract with Russian Helicopters last week, said the holding’s chief executive, Dmitry Petrov, adding that shipments had already started. “The size of the contract is more than 120 billion rubles,” he told journalists ahead of the celebrations.

The holding also signed contracts with the Defense Ministry during the MAKS air show last month to deliver more than 450 helicopters by 2020.

Export shipments of Ka-52 Alligator might start in the near future as state arms trader Rosoboronexport is in talks to begin export supplies, Petrov said. “According to our information, such negotiations are already being held,” he said, without elaborating.

Petrov declined to specify the potential buyers, but Interfax reported last month, citing a source in the armed forces, that Libya had planned to spend $1 billion to buy the Ka-52 Alligator helicopters before an arms embargo kicked in.

But Andrei Reus, head of state-owned Oboronprom, the parent company of Russian Helicopters, said the helicopter manufacturer’s revenues are unlikely to be affected by the loss of potential ­contracts because it has many orders. “Russian Helicopters’ production capacities have never been as busy as now,” said Reus, who also attended the celebrations.

Petrov echoed his thoughts. “Our missed profit equals zero,” he said, adding that Progress’ manufacturing facilities are fully loaded till 2020 and production volumes at the plant will increase.

Russian Helicopters — which claims to be the world’s No. 1 producer of attack helicopters — completed consolidation of the country’s helicopter manufacturing facilities into one vertically integrated holding late last year, and Petrov said that Progress is a pearl in the crown of the holding’s units. The holding’s other units include plants in Rostov-on-Don; Ulan-Ude, Buryatia; Kazan, Tatarstan; and Kumertau, Bashkortostan.

Apart from the Ka-52 helicopters, the plant in Arsenyev, a single-industry town 250 kilometers northeast of Vladivostok, will also commence production of Mi-34C1 light civil helicopters next year and start manufacturing medium-lift Ka-62 helicopters in 2014.

The holding also plans to launch production of a Ka-52K, a modification of the Alligator model intended for equipping the Mistral-class helicopter ships that Russia ordered from France for 1.2 billion euros ($1.7 billion) in June. The production of trial models of the helicopter will begin at Progress next year, Denisenko said.

Russian Helicopters will spend about $250 million on research and development, including designing new helicopters, this year, Petrov said. About half of that sum will come from the holding’s revenues, with the rest being provided from the federal budget and in bank loans, he said.

Russian Helicopters planned to raise about $500 million in an initial public offering on the London and Moscow stock exchanges, which would make it the first state-controlled defense company to go public, but called off the listing because of a lack of interest. It had planned to spend the funds on development and paying off debt.

Petrov said the company, which was valued at $1.8 billion to $2.4 billion in May, plans to go public “as soon as the markets allow,” adding that it could list shares in the beginning or the middle of next year. “It’s not our goal to list at just any price,” Petrov said. Top executives plan to visit major international stock exchanges in November and meet with investors again. But they will wait again on the IPO if  current volatility remains on  global markets, Petrov said. Russian Helicopters has invested more than 3 billion rubles in modernizing the Arsenyev plant in the last three years and plans to invest another 6 billion rubles in the next several years, he said

The plant, which has 6,000 employees, benefited from joining Russian Helicopters, which gave the facility the chance to get state orders and create additional jobs, Denisenko said. The plant has undergone a rebirth with the new facilities equipped with modern machinery, although Denisenko, who came to it in 1975 as an ordinary worker, cannot forget the hard times in the 1990s, when the country’s helicopter industry was in ruins after the Soviet collapse.

“The plant was in tight economic straits, there was no work, wages were being held up, and many of my colleagues left to different private firms,” said Denisenko, who was head of the plant’s assembly facility at the time. “My personal achievement is that I remained devoted to my work … because I love aviation,” he told The Moscow Times.

Half an hour later he joined dozens of other aviation lovers to watch the demonstration flight of the Ka-52 at the nearby landing field, as the fog let up and the helicopter maneuvered in the blue sky.