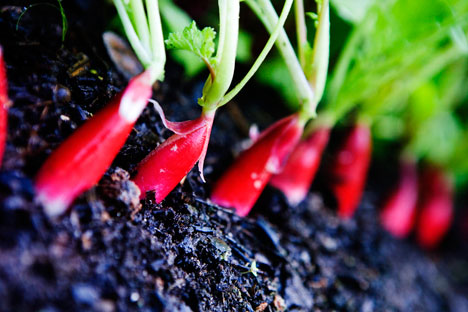 This summer, Russia’s Chief Medical Officer Gennady Onishchenko called on Russian farmers to take their cucumbers, milk and eggs straight to the markets, avoiding the commercial middlemen. For your average Russian dacha owner, this could even be a good source of extra income, but real farmers are still not rushing to the markets with their goods. Russian organic farmers are instead connecting with buyers through online grocery stores, which peddle an alluring image of rural bliss on their pages, with happy enthusiastic farmworkers gathering potato beetles by hand and feeding curds to baby chicks. But the way in which Russian organic food growers work needs to be defined on their own terms. Ultimately, the premise behind organic farming is that people know where their food comes from.

Four years ago, Olga and Sergei Vankov went fishing in Mozhaisk, in the Moscow Region, and found themselves captivated by the local scenery. Lying in an unkempt farm meadow (“The grass here was taller than a jeep!” he remembers), Sergei felt as though he had come home. The next day he bought a few dozen hectares of hayfields as a present for his wife and got a cow in the bargain. Now there are four cows on the farm, plus goats, birds and 144 pigs, and there is also a fishing complex in the pipeline, where the couple are planning to rear sturgeon and produce black caviar.

For local residents, pork priced at 200-260 rubles per kilogram seems excessively expensive. The Vankovs sell their produce through the online store “Ferma,” which takes orders from customers in Moscow. However the farmowners think of the Internet only as a temporary way of selling their products.  To help boost sales in the long term, they have decided to turn the farm into an ecotourism center. Today there is already a lakeside village with eight guesthouses. And at the edge of the estate amongst young birch trees you can see small log frames: This is where the village of Berendeevki is being built.

Sergei describes the new buildings; “- house-bathhouse, house-bathhouse, every house with a Russian stove.” The farmer and his surroundings seem like a stereotype of a Russian village of the past. His fresh white linen shirt is all about modern rural simplicity.

“The road goes through a small wood, and the houses are going to have roofs grown into the ground. Behind the houses there is a marsh. My wife isn’t overly keen on this marsh, but I like it: The smell is so nice there, it’s all wet and earthy. We want to make a track for 4X4s there. To drive through this place you often need to get out and push, and this can be quite fun for the men of the species. And next to it there is a big meadow. But it is better to stay out of this meadow when its haymaking time – there is so much oxygen and different smells that people fall off their horses! The guests will have to fill their leisure time – but what would that entail in this place? Sitting in their rooms, drinking vodka? No, we have decided to make a craft house, put a workshop in there, so people will be able to make thread themselves, and felt their own valenki.”

Olga is roasting a loin of pork in the Italian oven.

“You know how I can afford all this?” she said. “It’s because I have another business, I’m able to buy the equipment, to build a barn. I have money, but I don’t want to spend it on diamonds; I’d prefer to enjoy all this. But making a living from this? A peasant farmer would never think of doing this: It’s 100 percent unprofitable. There is no proper way of marketing it, and so in Russia the land lies abandoned, uncultivated.”

“I sometimes ask myself why we need it all,” added Sergei. “I’ve lost count of the number of times people have suggested we build over the land, break it up into building plots and sell it. But I don’t have the heart to ruin a place like this!”

As well as the pork on the table there is also a plate of homemade lard, fresh green salad, tiny peppers straight from the bush, steaming pies and currant liquor from a decanter. Through the window, which is almost twice the height of a person, is an idyllic landscape straight from a Russian fairy tale: an uncut meadow, a smooth glassy lake, village huts with dark grey walls. A new red tractor crawls slowly out from behind a hill like a ladybird, magical swans fly over the lake, the sun is going down, everything smells of wood and homecooked pies.

“I have a French friend called Marianna,” began Natalia Ivankevich. “So one day she and I were at the market. We stop by one of the counters selling salad, she asks: ‘Which do you like better – iceberg lettuce, Batavia or endives?’ And here I understand that something had been missing in my life!”

Now she has more than made up for what was lacking. Greens are this gardener’s specialty. Natalia sells her rocket and salad burnet through the online grocery store “Lavka.” From a dozen vegetable beds, Ivankevich harvests between three to five kilograms of greens a week, which, in the scheme of things, is quite a lot for one dacha owner, but is clearly not enough for one town: the demand for Ivankevich’s greens far outstrips the supply.

Natalia, a French-Russian translator by profession, decided to start selling her produce for practical reasons – she needs to finally build a house on her property – but her passion for salad leaves is sincere.

“I took some aspects of permaculture – that is when everything grows together, and you never dig the earth over, and some principles of biodynamic farming,” said Natalia, explaining the principles she follows when gardening. “Biodynamic farming is the oldest branch of organic farming; it came about towards the beginning of the 20th century, around the time of Rudolph Steiner. This involves both plant rotation and combined planting.

We go into a small greenhouse, where there is a dried out cucumber bush next to tomatoes and sage.

“French speaking gardeners wrote to me on a web forum: ‘Oh great! - You’re from Russia, you have the best tomatoes there!’ I had to explain to them that tomatoes of Russian origin are among the top-ten most delicious tomatoes in the world. But we don’t have them in Russia, we don’t even know about varieties like The Black Crimean, Gregori’s Altai tomato, Anna Russian or Grushovka. I went onto the state register – and they weren’t there! In the first wave of emigration, between 1917 and 1924, Russian people simply took the seeds of their favorite tomatoes with them to their new homes. The tomatoes obviously caught on in these countries and are now very popular. Here in Russia we buy Dutch hybrid varieties.

“I am not closed to new ideas, I have nothing against new varieties – just as long as they taste good. But I am against hybrid sorts, which are created solely for the convenience of the producers and sellers. On the Lavka website I concentrate on selling two things – regional vegetables and the heritage sort. On the one hand, Russia has many unjustly forgotten domestic varieties, but at the same time we have criminally impoverished our vegetable repertoire by turning down European varieties.”

Natalia also have some fruit trees around her property. This summer, the pear trees were dripping with fruit and chives were growing rampantly under the apple trees.

“The chives deter aphids from the trees, but this isn’t because of their smell,” Natalia explained. “The root secretions of the chives are soaked up by the roots of the fruit trees, and the aphids don’t like this…and this is a Petrovskaya turnip. Could you get more Russian than this? However on the Graines Baumaux website [a French seed merchant] we read that the ‘Petrovskaya turnip originated in Berlin. It was Goethe’s favourite turnip.’ And this is my passion – lettuce. Lettuce Maravilla, Batavia, this is the genuine article when it comes to lettuce, and the ‘Fat Lazy Blonde’ variety. This sort ripens in two weeks, but already you can see how tender it is, look at the buttery texture of the leaves!

Natalia scrupulously writes down statistics in a big red exercise books. She keeps track of planting and blossoming dates, the dates the plants are attacked by pests, and the date of harvest. Her diary of observations dictates her strategy of plant rotation, which is reminiscent of a plan for tank warfare.

Natalia’s latest achievement is a small melon with orange flesh, the very same sort that is eaten over a hot Mediterranean summer with wafer-thin Parma ham.

“This melon is called ‘Petit Gris Cantaloupe,’” she said. “A friend of mine from Brittany gave it to me – she gave me the seeds and said ‘this is a national treasure, we have been growing it for more than 400 years.’ I replied ‘Ha! We also have a national treasure in Russia.’ And I send her some Petrovskaya turnip seeds.”