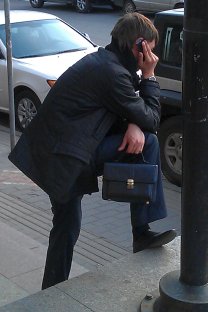 What is it with Russian men and the man-purse?

A small little thing repeatedly catches my attention on Russian men – the mini bag. It is a small thing, ranging from just-big-enough-to-squeeze-a-wallet-in, to maybe-an-iPad-could-fit-in sizes. A friend of mine calls it simply “the fag bag.” And seriously, this style cannot possibly look good, I cannot imagine a way a man (or woman!!) could make this typical man-bag socially acceptable or bearable. This, however, doesn’t stop the Russian man from trying. Some try to combine this extraordinary piece of bad taste with a sexy unbuttoned funky shirt and matching beer (vodka) belly, others with cheesy sleazy light suit and shoes. There are many forms a man bag can take: Sometimes they are square, sometimes rectangular; sometimes it has a long strap or it has a small handle, has a buckle or a zipper. I even spotted a guy with a miniature briefcase, possibly trying to do the businessman style, but couldn’t quite afford the matching real-size bag. Now, one will say that around the world this phenomenon of men with bags occurs, but why does it seem so predominant in Russia?

What do men have inside them? This is a well-kept secret, just as the contents of the female purse are said to be. For many men (that I know from western cultures at least) the content of a female bag is a taboo and not to be understood, touched or interfered with. To the credit of Russian men, they are brave enough to set foot (hand) forward, in a territory so unknown for most men that it is admirable – the female purse. On many occasions I noticed couples in shopping centers or even on the street, walking next to each other and the guy (!!!) with the girl’s handbag on his shoulder or arm, carrying it with self confident and no signs of shame. The entire picture raises two questions: nr. 1. Which girl is not attached to her handbag as part of her limbs and nr. 2. Are Russian guys (as we know them) really so self-confident to be seen in public with a super flashy glitter bag?

Description of the average man-bag:

<- The last point mentioned is surely discussable and reflects my very own view on this issue. I can’t imagine to date a guy, who’s handbag would compete in size and style with my own. Maybe it’s pure envy speaking out of me on this issue, or I am just too traditional and not open-minded enough. Or maybe I could actually get rid of my own handbag then? Possibly I should see the opportunities that would arise - the responsibility of having a handbag would be simple transferred to the guy, what an act of emancipation!

I asked guys over Facebook: Would you wear a man-bag?

“NEVER NEVER!!!” (Tony, from Austria, living as Expat in Moscow)

"No, but my wife several times tried to persuade me to buy one. For me it would be a kind of sign of assimilation. It’s a distinctive sign which says I’m Russian. But we should never forget: Russians think the same about rucksacks and foreigners.” (Lukas, living in Moscow)

One of my German friends here in Russia even posted a photo showing him and a very girlish lady bag, inspired by the survey.

Opinions might split here, so let’s ask some girls about this: Would you date a guy with a man-bag?

“I think I would date such a man, but the bag should not have any girly stuff on it!” (Anna, from Minsk)

“Why not, some man handbags are really stylish!” (Irina, Moscow)

“Some man-bags have a feminine touch, but if the guy is really hot I would not pay much attention to such a detail. If I had to give advice to a male friend, I would suggest going without the bag.” (Irina, from Germany)

“Man should be allowed to wear man-bags, but it would have to have an extremely masculine design and I prefer that it would be tied around the waist and not hanging across the shoulders…I guess they carry around a book or camera, but if they stuff anything else in there, man I don’t wanna know!” (Helenika, currently U.S. but lived in Moscow)

“I prefer briefcases! I would date a guy regardless if he has a bag or not, but it would make me think how much time he devotes to himself (maybe too much, especially if it’s a stylish one) and how much time he has left for me. If he is confident about having that bag, it’s fine with me.” (Olga from Moscow, living currently in D.C.)

“It could mean you are dealing with a metrosexual, a higher maintenance kind of guy who’s shoes could be more expensive than yours!” (Nora, D.C. with profound Moscow experience)

Given those comments, guys are quite against man-bags, even though girls seem to have not really such a problem after all with them. So guys, why not giving it a try, maybe it just takes some stylish guys to introduce the man-bag in the adequate way!

“Never, ever, I hate that type and man who respects him or has a bit of taste would never go with that. I would say these bags echo the early 90ies and are outdated! (Anna, Moscow)

“Yes, I am actually dating such a guy” (Kat, Moscow)

Surprise me guys! Send me your man-bag styles and I’ll publish the coolest one in my next blog!