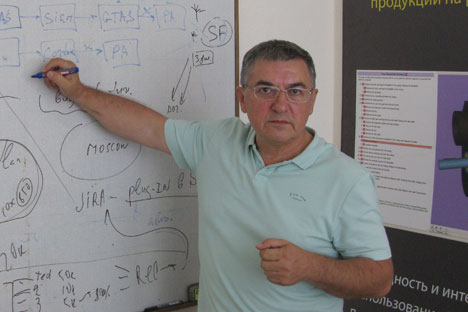 Software programmer Georgy Pachikov acted contrary to usual Russian business principles - he found an audience for his product before he developed it.

On Georgy Pachikov’s computer screen, there is a large white museum hall. A racecar, a large backhoe on wheels and an airplane engine are on the platforms. Everything can be viewed three-dimensionally.

Quickly, Pachikov grabs the backhoe on wheels with the mouse pointer and it turns out to be Leonardo da Vinci’s armored vehicle with canons and a metal shell.

“See, this cog turns here and that simultaneously drives the tower.” After 10 seconds, he zooms in on a wood cutting machine: “This is where you horizontally insert the rough wood and the graver is inserted vertically from above here. This button turns the machine on. The longer you press the mouse clicker, the deeper the wood is engraved. Look! Whoosh!!” Pachikov says enthusiastically.

Georgy Pachikov was born in 1953 in the Georgian Tbilisi. He studied economic cybernetics in Moscow. Until 1988, he worked as a software engineer for the Department of Gas Industry. In 1986, he opened the first USSR computer club with his brother and the chess player Garri Kasparov. In 1989 the brothers founded ParaGraph, which the US software giant Silicon Graphics bought for 57 million in 1997. His current company, ParallelGraphics, cooperates with Siemens PLM, among others. 2010 Revenue: 4 million euros.

Pachikov is the founder and president of ParallelGraphics. The software company develops user guides – animated repair manuals and technical documentation in 3-D. The questions his business answers are ones he's been asking since childhood: “How does that work?”

Wearing a t-shirt with a drawing and the caption “How do you feel today?” while sitting in an Asian café in downtown Moscow, Pachikov describes how he and his brother Stepan founded the ParaGraph company in 1989.

“Back then we were the first worldwide to simulate the everyday on a computer, long before Second Life,” Pachikov said proudly. They developed a virtual environment in which each user could stroll across the Red Square as their alter ego. “Each avatar has a speech bubble above its head where you can chat.” As innovative as it all was, success did not follow. “After a while all users left their avatars behind and limited their activity to chatting – interpersonal communication was still the most important,” said Pachikov. Nobody really knew what could be done with 3-D graphics. The market wasn’t there yet.

When Pachikov moved to a new apartment in 1999, his washing machine broke. With a friend, he took the machine apart, “down to the last screw.” When they reassembled the machine again and turned it on, it worked, but there were five screws left.

Cortona3D is a software programme that automates the development process of technical documentation. Application areas for the software are almost limitless: from Foucault's Pendulum to a hydropower station, selected technical mechanisms can be simulated. The only thing the software needs to do so is the technical CAD files, which are converted into the current S1000D or ATA2200 format and then visualised. The animation process is completely automatic. Afterward, the files can be integrated into the repair and maintenance manual as a video sequence that shows each task step by step

“We had no idea where to begin: the user manual was in French and there was no translation. And even though we are both engineers, we were at a complete loss,” Pachikov said. The washing machine gave the programmer a brilliant idea: “An animated repair manual in 3-D that explains each individual step sequentially, translated into multiple languages – that would be the saving grace for all technicians!”

That same year, he founded ParellelGraphics. His team quickly assembled the project documentation. For Russia, they were acting counter-cyclically. “In this part of the world, innovation processes run in the opposite direction: a Russian invents something and only afterwards worries about what to do with it and where a market for it might be found.” Pachikov, on the other hand, knew what audience he was targeting.

Pachikov’s first large client was U.S. aircraft company Boeing. “Boeing maintains a design center in Moscow where the boys scan the Russian market for innovations and new talent,” he explained. After his presentation, “the boys” offered him an exclusive five-year contract. It was 2001.

The collaboration was very successful. “The same day the Boeing contract ended, Airbus was knocking at the door,” Pachikov said. More big names followed, including General Electric, Honda and Siemens. For the Business Jet, the new Japanese small aircraft, ParallelGraphics created all the technical documentation. And in 2011, Pachikov signed a General Partnership with Siemens. His virtual preparation of technical products is integrated into the electronics giant’s Team Center program package.

The applications in industry are huge, according to Pachikov: “Because of our software, General Electric saved 70 percent off the cost for technical documentation,” he said. The software also makes it possible to put a product on the market more quickly because it can already illustrate it in its entirety during the development phase.

Beyond business applications, Cortona3D can be used for training in technical schools. “In the future, every auto mechanic, every electrician will have the individual steps readily available on their tablet PC and can then implement them,” Pachikov said.

In order to describe his dream, the “Exploratorium,” he opens his computer once more. Now he zooms in on an engine, grabs it with the mouse clicker, disassembles and reassembles it virtually, lets the turbines spin. “Imagine a virtual museum where every technical device ever invented by man is collected. And you can walk through and operate each one, take it apart and reassemble it.” And answer the question: “How does that work?”