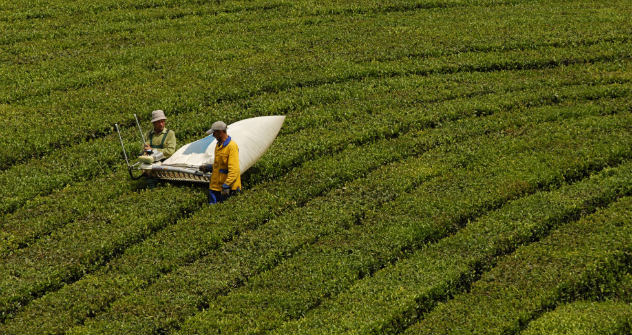 It may not be Assam or Ceylon, but growing tea is a profitable business in Russia. Krasnodarkiy krai is one of the fastest developing regions of growing the tea. Source: RIA Novosti

Agribusiness has alot of potential in Russia, but getting the balance right is difficult.

A lonely black-and-white cow grazes beside a road in southwestern Russia, 62 miles from Kursk. Farmers Klaus John and Sergei Yarovoi are on their way to a farm belonging to their employer Prodimex. Pasture, sunflower fields and harvest-ready grain line the bumpy country road. John points to the animal and says: “That’s what the Russian dairy industry looks like.” A few miles away stands another cow.

Credit instead of subsidies

In villages, children round up the cows daily in order to collectively herd them to pasture. “Like Peter, the shepherd boy, shepherding the goats in the Alps. It looks idyllic, but it doesn’t feed a country of 147 million,” said John. Russia has to import one million tons of pork alone from the EU every year.

That’s why President Dmitry Medvedev included self-sufficiency in his Food Security Doctrine. In it, he explained that by 2020, 85 percent of meat and 90 percent of milk should be produced in the home. This would be a 20 percent increase over current levels.

The state offers some subsidies to encourage Russians to produce their own food, but the amount is small. At the moment, Moscow distributes approximately $9.8 billion to Russian farmers each year. But Brussels distributes more than $140 billion to EU farmers annually. Even so, according to John: “In Russia, you can already produce at world market prices.” Russian agriculture is capable of being competitive, even without subsidies.

Still, the country is currently one of the world’s largest agricultural importers. Russia has 11 million cows, but that’s a big drop compared with the 42 million dairy cows in the country at the time of the Soviet collapse.

Around 1900, Russia was the largest grain exporter in the world: almost a third of the worldwide grain export came from the Russian Empire. The First World War, revolution and years of civil war lead to a depopulation of villages and a large interruptions in agricultural production. Only in the second half of the 1920s did crop yields increase again.

In 1929, Stalin decided to collectivize the entire agriculture sector. However, rather than handing their animals over to collectives, many farmers slaughtered their horses, cows and pigs. This resulted in a renewed interruption in agricultural production, especially in livestock production. In 1940, with the increased use of machines, grain production again reached pre-war levels. The Second World War cut meat and grain production in half.

At the start of the 1980s, the Soviet Union was the largest producer of wheat, rye, barley, and cotton worldwide but after the end of the Soviet Union, the state-run collective farm system collapsed. In 1998, Russia produced only half as much grain as it had in 1990. 2008 was the first year since the collapse of the Soviet Union that yielded a higher harvest than that of 1990.

Today, 10 percent of the population is employed in agribusiness; revenues in 2009 totaled 1.53 billion rubles.

Agrarian experts believe that milk, soy and beef will still need to be imported for a long time, but in 10 years, Russia should be able to meet its needs for pork. Pork production has increased by 8.6 percent in recent years.

Grain and canola are already produced in overabundance and exported. In 2009, 108 million tons of grain were harvested; in 2010, there was a major decrease in production due to drought and wildfire, but a good harvest is expected again in 2011.

Those presently investing in the Russian agrarian sector expect a high increase in value. In July, a Czech-Dutch trust purchased the RAV Agro-Pro company, which owns 160,000 hectares of land in the fertile Black Earth region. The trust is counting on a 400 percent appreciation in the coming years.

Yet much of the Russian countryside is still uncultivated: “Most enterprises are inefficient,” says Sergei Yarovoi. “The Black Earth area could generate more than an additional 40 percent.” But when John and Yarovoi drive out to the farms, they are often greeted by unpleasant surprises. Weeds sprout up in the midst of a field of beets, showing that pesticide spray truck drivers missed a row. At lunchtime, combines sits motionless for hours. Compared to Central Europe, a combine in the Russian Federation costs considerably more but only harvests half as much.

Another reason for the inefficiency is the structure of Russian agribusiness: the self-supporting farms are too small, but the existing agricultural companies are too big. It’s difficult to control each division or to manage large revenue fluctuations. Furthermore, publicly traded holdings distribute their gains to the stockholders, so there's no cushion for hard times. This became especially clear in the 2008 financial crisis when some holdings couldn’t pay wages for months. Agrarian experts are pushing for stability from below, encouraging small self-supporters to form medium-sized family enterprises and market their products.

But many parents, like Olga Yuyukina, don’t see a future for their children on the land. Her son grew up with cows, tractors and haying. Now he’ll study in the city. “He should become a manager,” says his mother.

Agronomists for large companies complain about the aging of rural regions. “We can’t find enough skilled people that can work with agricultural machines and the newest technology,” says Alexander Musnik from the agrarian business Soldatskaya near Kursk. After their studies, few want to return to the land.

“There aren‘t even movie theaters and only a few restaurants, and all our friends live in the city,” explains college graduate Sergei Yarovoi. He works in Voronezh and only returns to his hometown on weekends. Even agrarian university graduates cannot be tempted with higher pay to leave the city centers for the periphery. Those living in villages are disparagingly referred to as “derewentschina” [hillbillies] or “kolkhozniks.”

That's why searches for skilled people are both national and international. It’s interesting for foreigners to work in Russia – and not just because of the money: “I came because life is just more exciting here,” says Torbjörn Karlsson.

The Swede is not alone: in the evenings, agricultural professionals from Germany, South Africa and Switzerland meet for a beer after work in Voronezh, their company’s base. Topics of conversation include grain prices, soil moisture levels and experiences with Russian police. They all work for different holdings, but there’s still an exchange, the competition is not great. There seems to be enough land and profits for all.