Bringing Russian and Indian culture together 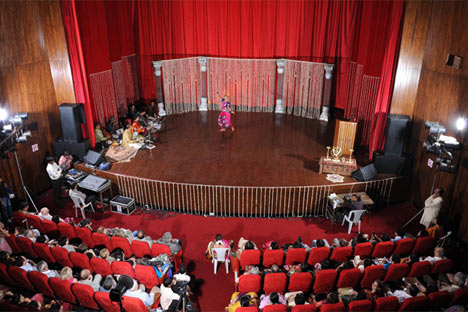 A festival of Russian & Indian culture was opened at the Russian Science and Culture Centre in Mumbai on 4 September 2011. The opening ceremony was attended by Russian Consul General in Mumbai, A. Novikov, Deputy Head of Rossotrudnichestvo in India V. Dementyev, Russian diplomats and representatives of the Indian intelligentsia. The honoured guest of the festival was the Indian film star and dancer Hema Malini, who became popular appearing in films opposite members of the Kapoor acting dynasty: Raj, Shammi, Shashi, Randhir, Rushi and others.

The talented young Indian dancer Jill Vasani gave a solo performance of South-Indian classical dance, specially designed for the Russian Science and Culture Centre stage in Mumbai. She studies under the famous dance guru Menaka Thakkar. Gil Vasani performed previously at the Russian Centre in Mumbai during the events to mark the Centre’s 35th anniversary. Her new programme included performances of famous Indian singers and musicians. The concert was a runaway success: 380 spectators filled the Centre’s 250-seat auditorium. Jill Vasani was invited to take part in the culture festival in Krasnoyarsk in 2012.

The festival lasting from 4 to 14 September 2011 is to feature the singer Larisa Savinskaya, the dance group Svetlana and an ensemble of Indian students singing Russian songs and led by T. Barysheva.