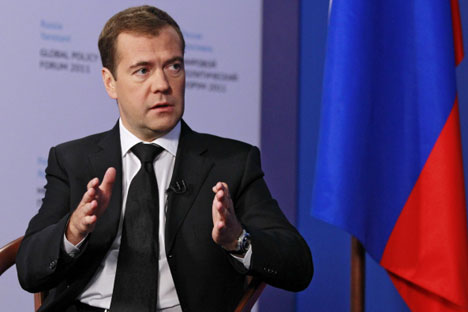 UN Resolution 1973 was exceeded in Libya, and Russia does not want similar scenario to unfold in Syria, Dmitry Medvedev told the Euronews TV Channel after the Global Policy Forum in Yaroslavl.

Euronews: Mr. President, we are in Yaroslavl, which for the third time is hosting a global political forum that you are the patron of. The central issue this year is that of multiculturalism. Why do you think this issue is so important today?

Dmitry Medvedev: Because it is. We see tensions in interethnic relations, relations between labour migrants and local residents, in almost every European country. The Russian Federation, too, is facing these problems. That’s why I deemed it appropriate to raise this issue with experts and active politicians.

Our view of the issue is more complex. Of course, there is also the question of how you define multiculturalism. But Russia has an extremely complicated ethnic situation. We have many ethnic and religious groups. To us, the issue of interethnic relations is not limited to the issue of migrants. Every country has migrants, and Russia is no exception. But to us, this is an issue of our national harmony that we have developed over centuries.

There was even a time when we thought we had achieved a whole new level of interethnic harmony in our country. There was even a special term for this in the Soviet Union. Back in those days, they said we had “a unique community called the Soviet people.” Those ideas proved to be largely unfounded. But this does not mean we should ignore this issue and give up this idea.

We need to build a society that would have genuine harmony, where people would be tolerant to each other and, at the same time, respect traditions that are essential for this or that ethnic group, everywhere – in Central Russia, in the Caucasus, in the Far East, etc. All those people are Russian citizens, they all have the same rights and responsibilities, and they should all conduct themselves appropriately.

Thus, this issue is important to us. Besides, as I’ve said, Europe is also experiencing similar problems. I think it is very important for us today to come together and share both our theoretic approaches to those issues and some practical recommendations.

E: Winter is coming, and Russia and Ukraine are once again embroiled in a gas conflict...

DM: There is no conflict as yet. I’d say we have different approaches to some issues, and this may evolve into a complex situation.

E: Can this create problems for the deliveries of Russian natural gas to Europe?

DM: I really hope that the situations we had with our close friends and partners in the past few years have taught us all that you can’t tear down the existing contractual framework, even if you don’t like it. When our colleagues, our partners – the president of Ukraine, the prime minister of Ukraine – say that this contract is unfair, that it is bad, and that they are not going to honour it, this doesn’t make any sense. A contract remains binding unless it has been repealed in court or terminated by the parties. So I hope that our partners, our Ukrainian friends, will strictly observe the agreement we made in 2009, just like us. As for the future, I have said on several occasions that we are ready to discuss different forms of cooperation with our Ukrainian colleagues. It may be advanced cooperation, should Ukraine join the Customs Union. Of course, they say they can’t join the Customs Union because of the WTO – which is strange, because we are in the Customs Union and we can still join the WTO. But if they say this may be a problem, it is up to them. It may be some other approach, say, investment into Ukraine’s economy and its gas-transit system. If we come to an agreement on these issues, we might consider changing the model of our cooperation. But there are a few things that will never change. First, gas contracts are always based on a pricing formula. The formula is universal: it is the same for Ukraine as for other countries. All talk about Ukraine paying more than other countries is totally unfounded. It is pure propaganda. The formula used for natural gas deliveries to Ukraine is the same as with all the other countries, and the money Ukraine pays is commensurate with what other European consumers pay. It is true that prices are high, but there are times when they drop to extremely low levels, creating problems for the supplier. So, to recap, I hope that Ukrainian consumers will honour the contract and that later we will find a way to come to an agreement about our future cooperation.

E: During his visit to Moscow, French Foreign Minister Alain Juppe, if I understood him correctly, called on Russia to back the EU sanctions against Syria. What is Russia’s stance on the issue?

DM: Indeed, I discussed this issue in my meeting with Mr. Juppe, the French defence minister and his  Russian counterpart. We are not entirely satisfied with the way Resolution 1973 was implemented. This is water under the bridge now, since the situation in Libya has changed fundamentally. Still, we believe that the mandate granted under Resolution 1973 on Libya was exceeded. We would not want to see the same thing happen in Syria. There are indeed problems in Syria, and we are aware of them, including the disproportionate use of force and the high toll of casualties. We, too, think this is unacceptable. I pointed it out in my personal conversations with President Bashar Assad. Just the other day, I sent a deputy foreign minister to him to reiterate our position on the issue. However, I believe the resolutions we would approve to send a strong message to the Syrian regime should in fact be addressed to both sides. Things aren’t just black and white there, and the anti-government protesters in Syria are not followers of some refined European models of democracy. There are different groups within the opposition. Some of them are, to put it straight, extremists, and some might even be called terrorists. The situation is not that simple, and we have to take into account the balance of different forces and interests. Russia may support certain moves, but only if they don’t boil down to the one-sided condemnation of the government and President Assad. We should send a strong message calling on all the conflicting parties to come to the negotiation table, start the talks and stop the bloodshed. This is also in Russia’s interests because Russia has always been Syria’s friend, and our countries have close economic and political ties. That’s why we’ll continue to look for solutions to the situation in Syria.