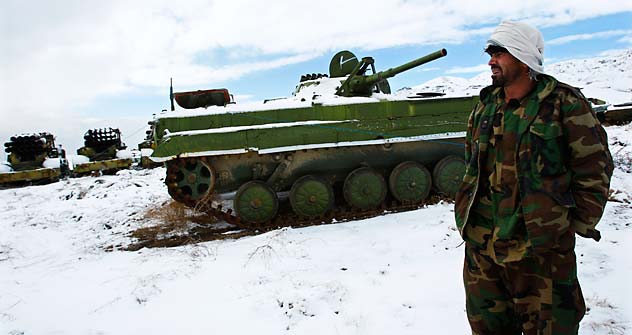 An Afghan guard walks by Soviet made tanks at a tank cemetery on Jabul Saraj highway, north of Kabul. Source: Reuters / Vostock Photo

While it is common now to say that the United States learned nothing from the Soviet experience in Afghanistan, the truth is that the two wars have nothing in common.

For some time now, many Russian and foreign writers have indulged themselves in saying that the U.S. is making the same mistakes Russia committed in Afghanistan.  While undoubtedly anyone looking to make that comparison can succeed if he tries hard enough, this is not the most important fact in any comparative analysis of the two wars in Afghanistan.  Indeed, on closer inspection, this argument is a facile, superficial, reading, often inspired either by a kind of Schadenfreude at the U.S.’ difficulties or an attempt at a retrospective justification or salvage operation of the Soviet Union’s war in Afghanistan.  The analogies between the two wars pertain to lesser phenomena while the differences are immediately visible at the most important strategic and operational levels.

First, Moscow’s war was an unwarranted Soviet invasion of a country torn by civil war to rescue a group of fanatics and opportunists who thought they could make Afghanistan into a socialist state. Moscow then compounded the error by falling for the same argument.  Consequently, the Soviet invasion of Afghanistan not only alarmed international opinion across the globe and stimulated the birth of an international alliance against Moscow that greatly contributed to the invasion’s ultimate undoing.  The U.S. (and now NATO-led) war is quite different.  It was and remains a defensible response to the Al-Qaeda attacks of 9/11 and the Taliban’s determination to shield Al-Qaeda against its deserved retribution.  As a result, whereas the Soviet invasion never had a shred of international legitimacy and stimulated a robust counter-alliance against it, exactly the opposite state of affairs characterizes the U.S./NATO war. That war, despite war weariness, has never been questioned as to its legitimacy and spawned an international alliance against the Taliban.

Second, while the Soviet forces attempted to support a domestic campaign in Afghanistan to build socialism, instead they alienated the population, devastated the country and forced thousands of educated Afghans to flee, making them refugees abroad.  In the case of the U.S./NATO war, the exact opposite has occurred.  Refugees have returned and brought their skills and personal capital with them.  Moreover, despite the war, Afghanistan’s trade with its neighbors is growing, foreign states like China are investing there, and the number of boys and girls being educated is also growing.  Roads are being constructed and infrastructure developed.  Despite the many difficulties and failures that continue to plague the country as a result of the war, such indictors do not attest to an overall failure and compare favorably with the destruction wreaked during the Soviet occupation of 1979-89.

Third, the Soviet forces were defeated and had to leave ignominiously.  They never were able to break either the resistance or any of its leaders and components.  In the U.S. and NATO campaign, the allied forces severely wounded Al-Qaeda even before Osama Bin Laden was killed in May 2011.  The Taliban leadership, too, has been seriously disrupted, with many cadres being killed.  Even if the Taliban prevail once the U.S. and allied forces leave after 2014, it is by no means clear that Al-Qaeda will be anywhere near as effective as it was a decade ago.  And it is by no means certain that the Taliban can or will prevail in 2014.  The claims to that effect now being made are neither grounded by analysis nor supported by evidence and remain either speculative or wishful thinking. Indeed, this claim, often made in the context of the analogy between the Soviet and NATO forces, usually betrays the prejudice of the person making such claims.

Fourth, the claim that NATO and the U.S. are merely repeating Soviet errors falls apart when applied to a comparison of Soviet and U.S. forces.  Soviet forces never adapted to the demands of warfare in an environment like Afghanistan and did not substantially modify their tactics or force structures.  Soviet military journals wrote little about this war and have tried to forget it since, preferring to concentrate on large-scale potential combat in the European and East Asian theaters against NATO.  For 20 years after the war, the Soviet/Russian military eschewed defense reform and serious learning to the point where Chief of Staff General Nikolai Makarov recently blasted the General Staff Academy for failing to keep up with the changing character of warfare and for disseminating an archaic and inapplicable concept of contemporary war.  Despite the attempt at reform beginning in 2008, that reform, intended to enable the Russian Army to fight in wars like the current Afghan war or engagements like those of Israel vs. Hezbollah in 2006 and Hamas in 2008-2009, Russian literature still does not adequately discuss the challenges posed by this kind of warfare or encourage open discussion of global writing about this kind of war.

This stagnation, obstruction of reform efforts, and lack of receptivity to new thinking emphatically does not characterize the U.S. military response.  Obviously, military institutions do not change on a dime.  Nevertheless, the U.S. Army has clearly made the wrenching transition to becoming a force that trains for and understands the requirements of counterinsurgency.  It learned painful and tragic lessons in Iraq and Afghanistan where as the Red Army refused to learn much form those wars or develop new training routines to meet the specific demands of this war.  It has published major works at the tactical, operational, and strategic levels giving guidance to commanders and troops on how to conduct counterinsurgency operations based on these wars and that can be applied to them.  And it has done so while conducting an open debate in U.S. military publications about these topics.  Indeed, there are critics in the U.S. who charge that the Army is losing its ability to fight in other kinds of war due to the newly learned emphasis on counterinsurgency.

To be sure, there are undoubtedly several, even many, instances where U.S. and allied forces may have emulated Soviet errors, and there are important similarities, particularly with regard to Pakistan’s stance as a sanctuary for the Taliban and the Mujahadeen in 1979-1989.  But even here, Pakistan’s stance in this war, harmful as it is, has been considerably more ambivalent than in 1979-1989, as it has had to undertake serious operations against the Taliban and their allies from time to time.  Therefore, anyone arguing that Washington and Brussels are merely repeating the same mistakes that Moscow made during its decade-long involvement in Afghanistan needs to come up with better evidence and a sounder analysis than has hitherto been the case.

None of this precludes the fact that the Taliban may indeed prevail; especially once NATO and the U.S. withdraw their forces.  But that outcome is certainly not guaranteed as of 2011.  Indeed, Moscow and those arguing on its behalf would do well to produce and disseminate solid analyses of Russia’s war in Afghanistan and the lessons that it and others should learn.  For if we are to judge from Moscow’s conduct of its own counterinsurgency war in the North Caucasus it has a lot to learn.  Much as Russian military elites may want to forget their experience in Afghanistan, forgetting everything and learning nothing is not an appropriate response to the strategic challenges of our time.

Stephen Blank is a professor at the Strategic Studies Institute of the U.S. Army War College in Carlisle Barracks, Pennsylvania. The views expressed here do not represent those of the U.S. Army, Defense Department, or the U.S. government.