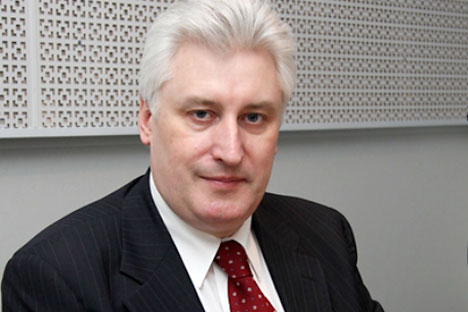 NATO has offered to join India in building its missile defence shield. With Europe threatened by Syria and Iran (Russia has not been mentioned) and India feeling insecure about some of its neighbours, the North Atlantic Alliance has offered to combine efforts with Delhi and build the shield together. The enemies are different but the technologies will be the same, NATO officials promise. Washington has gone even further, urging India to revise its non-alignment policy and join NATO.

Igor Korotchenko, editor-in-chief of the Natsionalnaya Oborona (National Defence) magazine and member of the Public Council of the Defence Ministry of the Russian Federation, elaborates on the prospects for the NATO-India potential alliance.

One of the key requirements for any missile defence system is full national control over it. With China and Pakistan posing as the main potential threats to India in terms of a missile attack, it is absolutely clear that it cannot hold much appeal for India to be included under someone else’s “nuclear umbrella”. On the contrary, building its own national missile defence system under Indian command would be a tempting idea, especially since India is working consistently to create a fully-fledged nuclear triad and such a military and technical policy implies the need for the country to build its own attack warning and missile defence systems.

In and of itself, therefore, NATO’s proposal appeals to Delhi, promising it new technology along with tracking, reconnaissance and strike systems. Yet I doubt that India would be happy with being unable to implement its sovereign national decisions if the proposed missile defence system were deployed. So there is some area for cooperation with the NATO alliance here but no more than that. From NATO’s point of view, this proposal is clearly anti-Chinese, especially given the strained relations between China and India, and, secondly, it reflects NATO’s globalisation strategy. Even so, the European missile defence shield was, from the start, meant to become part of the global US missile defence system, so the proposals made to India are evidently part of Washington’s global plan.

It is clear that, so far, things are still at the negotiating stage. Yet, if India does show an interest in NATO’s offer, how should Russia react?

Russia’s words bear little weight as long as there is no real strength behind them. You can bang your fist or shoe on the table if you like, giving vent to your fair indignation. You will be patted on the head and given a sweet but, in practical terms, your position and opinions will not be taken into account. So we should react by making India an offer it cannot refuse. More specifically, Russia should show its potential as India’s vital strategic, military and technical partner in creating India’s national air and missile defence systems, including transfer of the relevant systems and equipment (tracking radars and space surveillance systems) as part of the military and technical cooperation between the two countries.

In this case, Russia will transfer all such equipment to India’s national military command. I think this proposal would be quite effective in keeping NATO away from what is not its obvious sphere of interests.