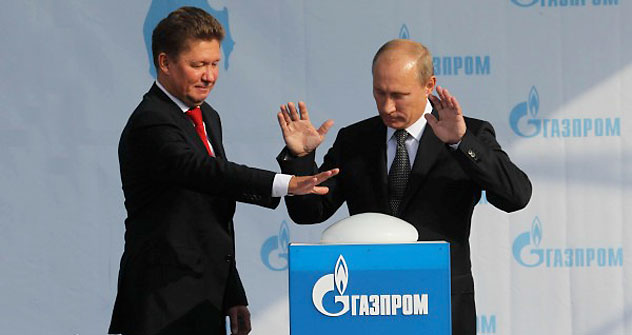 The Russian Prime Minister inaugurates the first section of the Sakhalin-Khabarovsk-Vladivostok gas pipeline.

“Gas from Sakhalin has come to the region”, said Prime Minister Vladimir Putin as he pressed the button to launch the first section of the Sakhalin-Khabarovsk-Vladivostok gas pipeline on Russky Island in the Primorye Region of Russia. “It is, indeed, a momentous occasion, because that source has never been here before.” “I remember coming here several years ago and driving through Russky Island in a jeep, along forest roads. Now virtually an entire city has been built and, of course, this is all based on energy”, Putin said.

He promised to go on working to develop the region “so that people feel comfortable here”. Noticing smoke from the Vladivostok thermal power plant, he added that Sakhalin gas would improve the environment. The Prime Minister called on the local authorities to do everything “to make sure that today’s event is reflected in the prices and housing and utility tariffs for those who live in this region.” This is because gas is only a quarter of the price of fuel oil.

“In general, it creates new conditions for development. Our major companies can already open new production facilities, which is very important, and create new, well-paid jobs, because energy is the basis of development”, Vladimir Putin summed up.

This project will bring gas to the facilities of the APEC Summit, to be held in a year’s time. The APEC includes 21 Pacific region economies (about 40% of the world’s population, about 54% of the global GDP and 44% of world trade). Russia joined APEC in 1998, and this was no accident: by the time it assumes chairmanship of the organisation in 2012, it will be able to host the summit in the Far East.

The Federal Budget has allocated 205 billion roubles for development of Vladivostok as an economic cooperation centre in the Asia Pacific Region, Vladimir Putin reminded his audience. This money should finance a sweeping modernisation of the infrastructure. Incidentally, Siberia and the Far East play a special role in APR integration projects, mainly in connection with energy and transport: they can provide an “overland bridge” to Europe.

Next year, Russia will, for the first time, design the APEC agenda and promote the initiatives currently being prepared by the Business Advisory Council. Russia is represented on that council by head of the Summa Group Ziyavudin Magomedov, General Director of Basel Oleg Deripaska and head of VTB Bank Andrei Kostin. The proposals have yet to be formulated but many experts and officials believe that Russia could use its unique geographical position to become a leader on the world market for transit transport services to deliver cargoes from South-East Asia and India to Europe, the USA and Canada.

Trade between Asia and Europe amounts to an annual $600 billion, of which Russia handles less than 1%. Yet the experts believe it could claim 10-15% of the market. First, though, it has at least to eliminate the bottlenecks on the approaches to its ports (about 4500 km) and modernise the railway infrastructure.

Another major project, the building of a new gas pipeline from Yakutia, will be launched next year.  While on Russky Island, the Prime Minister had a live video link with the village of Vitim in Yakutia. He urged the government and the companies involved to develop oil refining in Siberia and the Far East in order to cut fuel prices, which he believes are “unreasonably high” in these regions. “To be specific, talk with the companies, hold a meeting in Moscow at the Energy Ministry to explain the plans for developing oil refining in Primorye and in the Far East in general in order to stabilise domestic prices here”, Vladimir Putin said, addressing Deputy Prime Minister Igor Sechin.

The Far Eastern Federal University is due to open during the APEC Summit. Indeed, the summit will take place on the campus of that institution, Vladimir Putin announced yesterday. It consists of 27 buildings, 11 halls of residence, study buildings, student and medical centres, a landscape park zone and an embankment.

The Prime Minister did not just visit the newly-built campus; he also held a conference there to discuss the APEC summit legacy. Vladivostok was initially founded as a military city and developed accordingly. “Today, it is an open city and it needs innovations”, Vladimir Putin said. He recalled that, during his previous visit, he had been given a 1906 postcard: “At the time, our predecessors dreamed of a bridge that would link two parts of the city. The postcard has a bridge that looks very much like the real one… and it shows airships flying above it.”

“In 2011, we will put into practice the dreams and plans of our predecessors”, the Prime Minister stated confidently. But he said that a lot still needed to be done: “Neither the federal nor the regional government can be complacent.” “Russia will, indeed, inherit a tremendous legacy from the holding major international forums. Our task is to make good use of them”, he concluded.