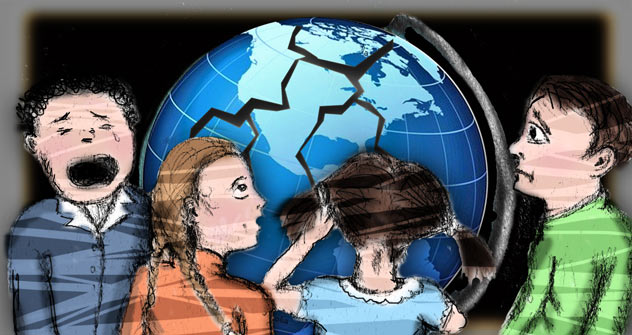 As we approach the tenth anniversary of September 11 2001, Fyodor Lukyanov, Editor-in-Chief of the Russia in Global Politics journal, shares his thoughts on the tragedy that turned the whole world upside down.

Ten years ago, when two passenger planes crashed into the towers of the World Trade Centre in New York within a few minutes of each other, it seemed that the world as we knew it had crumbled. Of course the world did not crumble, but the tragedy certainly rocked its foundations.

The impact of the largest terrorist attack the world has ever seen cannot be underestimated, but neither should it be exaggerated. The events of 11 September 2001 destroyed several illusions that had arisen after the end of the cold war, but it also generated new ones, which, however, turned out to be short-lived. One of the misconceptions that has been shattered is the idea that, with the collapse of the Soviet “evil empire”, mankind had finally and irreversibly made it onto the well-trodden path of safety, stability and prosperity. But then another misconception took hold; that it was time for America to take the bull by the horns and start arranging the planet according to its own principles.

On the one hand, what happened a decade ago became a catalyst for processes that had begun to develop in the 1990s, and on the other, 9/11 came to embody of the ideas and the concepts which now define modern politics.

The attacks on the USA were orchestrated by a transnational non-governmental organisation, the very same sort of structure whose emergence had been hailed as a symbol of a new liberal era. But it turned out that an NGO is not necessarily “Amnesty International”; it can also be “Al Qaeda”. The attack happened live as we watched, in its own way symbolising the triumph of the open society people had so been hoping for after the fall of totalitarian regimes. The United States received a mandate for global leadership, but only after they had missed a knockout uppercut, all the more insulting, as the blow was not dealt by a superpower competitor, but by an obscure force, which had seemingly come out of nowhere. It was this context that made it possible to demonise international terrorism in the hope of turning it into an identifiable constitutional threat– and one which would therefore give structure to global politics, a gap that needed filling after the implosion of the Soviet Union.

This hope was not justified. The danger that was dispersed across the alien and abstruse Muslim community was too insubstantial to be the lynchpin of international politics. The shooting of Osama Bin Laden, which has become one of Barack Obama’s few resounding successes, also served to demonstrate that the embodiment of absolute evil was no more than a minor, albeit colourful, character on the global political stage.
What is more dangerous is that, whilst international terrorist networks lacked the mettle to represent a constitutional threat, this is something that is well within the capacity of the Islamic world per se. Whether or not this should be a cause for concern, the decade that followed the 9/11 attacks has seen a sharp increase in mutual suspicion and ill-feeling between the West and the Muslim world. No matter how much people proclaim that the problem is extremism rather than Islam, the true nature of the relationship comes to the fore more and more often, as illustrated by slips of the tongue made by government officials, the results of the European elections and also in practical politics.

But Bin Laden did achieve one thing. He provoked the sole global superpower to take on military-political action, which, ten years on, many consider to have been strategically ill-considered, disproportionately expensive and, moreover, detrimental to the cause of consolidating American power. The wars, which started as a result of September 11, first in Afghanistan, then in Iraq, are nowhere near being concluded, the aims, whatever they were to start with, were long ago replaced by strategies for minimising damage to the countries involved.

9/11 demonstrated the steadfastness of American society and its political system – no one can dispute this. However the feeling of national unity in the face of the unforeseen tragedy and unseen enemy was the forerunner of a deep schism, the polarisation of society, which rapidly became more pronounced from the mid-2000s.   The problem of course, is not terrorism. Towards the end of the 20th Century America reached the peak of its socio-economic success and global domination. The “carefree 90s” was a decade when the reasons for a stain on Monika Lewinski’s blue skirt attracted more attention from the American’s than the war in Yugoslavia and the bomb-attacks on the embassies in Kenya and Tanzania, but these quickly gave way to the frightening “noughties”. The deepening sense of uncertainty coincided with alarming shake-ups to the economy. The need to pay the off the debts, in both the literal and figurative sense, that had accumulated in Reagan’s time, culminated in the 2008-2009 crisis, which, to all appearances, was just the forerunner to an inevitable stall in economic development.

The main enemy was actually not without but within, lying right at the heart of American (and consequently the world’s) lifestyle and consumption patterns. It is no surprise that the rise in Obama’s popularity ratings after the shooting of Bin Laden only lasted a couple of weeks – the minds of voters soon returned to preoccupations about unemployment, low economic growth and a general sense that things are moving in the wrong direction.

International terrorism was not the cause but the consequence (though not the only one and probably not the most fundamental) of a global imbalance, which is being accompanied by the destabilisation of the global power structure. However much he wanted to, no cave-dwelling bogeyman, like Osama, could inflict the same amount of damage on world order as a couple of oversights on the part of the President of the USA, the Chancellor of Germany, or even the head of the Federal Reserve System or the European Central Bank.

The last century, with all its colour and intensity, ended on 11 September 2001, when a force emerged that rendered the previous state of affairs obsolete. The popular references to the fact that Osama Bin Laden was once supported by the CIA are of no significance. The actions of the leader of Al Qaeda were not guided by what he learnt from the Langley instructors back when the common enemy was communism, but by a logic that was very much in keeping with the 21st Century – a time when the global balance is shifting from West to East and towards political models that are more archaic than those of the 20th Century, based on ideologies such as nationalism and religious renaissance.

Bin Laden himself, along with the organisation he founded, will be relegated to the peripheries of history much sooner than anyone could possibly have imagined in September 2001. But his cause – to dethrone the West from its position of world domination – will be continued by other people and through other means, and they might not even realise they are doing it.