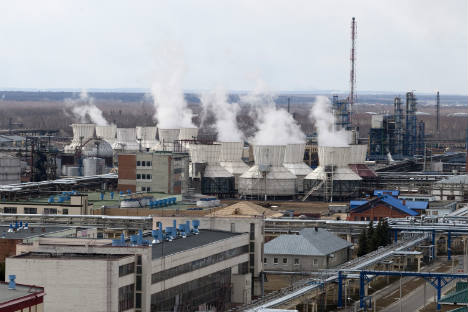 The exhibit at International Investors' Forum showcased diverse opportunities in Tatarstan, which has morphed into one of Russia's most successful regions.

All eyes were on the two-storey exhibit of Tatarstan at the International Investment Forum in the Russian Black Sea resort city of Sochi. Displaying a medley of opportunities in diverse sectors ranging from electronics and auto to retail and IT, Tatarstan was recognised as the most successful regions at the forum.

The man behind the show was Tatarstan’s President Rustam Minnikhanov. A ‘Fifty best innovation ideas,’ contest was held which helped evolve criteria for selecting the most promising and successful business projects.

At the 150 metre exhibit, the region’s investment projects were arranged in themed sections: Electronic Tatarstan (showing e-government systems and the Electronic Retail Information System of the Republic of Tatarstan (ETIS[J1]), a petrochemical cluster, construction and transport, agriculture, IT technology, the Alabuga SEZ, nanotechnology, and stands for the 2013 Universiade in Kazan.

“We just can’t look at this event in any other way; for us it’s a matter of pride,” says Azat Tukhvatullin, General Director of EVO-RU creative services, who were in charge of the exposition lay out. “People have got used to seeing Moscow and St Petersburg as the centre for everything that is interesting and profitable, and no one pays much attention to the regions anymore. But we really do have things to show off and we want to work with foreign investors,” says he.

Over the past several years, Tatarstan has had one of the lowest levels of risk among Russia’s regions from the perspective of foreign investors. The Fitch agency puts Tatarstan at the third place among Russian regions after Moscow and St Petersburg. Investments in Tatarstan amount to $4.15 billion. They come from 27 countries, most notably from Turkey, France, Cyprus, USA and Germany.

This year, the star of the show was the high-speed, fully computerized passenger ship, the A 145 motor vessel, exhibited by Tatarstan. It is designed to transport up to 150 passengers and their luggage along the coastline at a speed of about 40 knots (over 70 kilometres an hour), and can cover more than 200 miles without having to refuel. “One of the ship’s most important selling points is safety in every sense of the word,” says Sergei Porodnikov, chief engineer at the Gorky shipbuilding plant in Zelenodolsk, where the vessel was built. The vessel maintains its stability even if two compartments are flooded and it is able to withstand a five-point storm. The ship is primarily intended for use at the Sochi Winter Olympics in 2014.

The republic, whose capital is Kazan, is situated on the East European Plain at the confluence of the two greatest rivers - the Volga and the Kama. The distance from Moscow is 797 km. Covering 68,000 sq. km, the region is roughly the size of such countries as Ireland and Sri Lanka. The population is 3,8 million. Over 70 nationalities live in Tatarstan, Tatars and Russians being the most numerous. The official languages are Tatar and Russian.

The region is one of the most economically developed republics in Russia. Tatarstan today boasts oil production, oil and gas chemistry industries, car-manufacturing and aviation industries, power generation and IT. The oil and gas industry is the main source of budget revenues. The republic produces 32 million metric tonnes of oil a year (6.5% of the total Russian output). Its proven oil reserves exceed 1 billion metric tonnes, plus an estimated 7 billion metric tonnes or more of bitumen oil. Oil is refined at the Nizhnekamsk Refinery, the biggest in the republic (7 million tonnes of oil a year). Nizhnekamskneftekhim (synthetic rubber and polymers) and Kazanorgsintez (the leading producer of polyethylene in Russia, with a market share of more than 40%) are world-class companies. The republic has a highly developed automotive industry. Tatarstan’s visiting card is the KAMAZ auto giant, Russia’s biggest motor corporation. KAMAZ is already well known in India due to a JV with the Indian company Kamaz Vectra Motors Limited. The JV plans to produce 1250 trucks for India in 2012. India also knows famous Russian Mi-17 helicopters. They are produced in the Kazan Helicopter Plant, the world-famous producer of the Mi-8/Mi-17 family of helicopters. Mi helicopters account for 17% of the turbo-shaft engine helicopter market. Russia and India recently signed a major contract to supply Mi-17 helicopters to India. KAMAZ, together with the Kazan Helicopter Plant, is engaged in the Tupolev innovative project programme, which includes eco-friendly road vehicles and helicopters.

Earlier, Tatarstan showcased many projects and opportunities during the Venture Fair in Kazan, which was aimed at attracting investors to the region’s innovative technological companies and inducing them to invest in science-intensive small and medium-sized businesses. The fair was also helpful in paving the way for large-scale negotiations with foreign guests, hosting, as it did, 62 companies from Canada, Britain, the Russian republics, regions and cities: Tatarstan, Moscow, Novosibirsk and Tomsk, which offered their ideas and business plans to representatives from more than 50 foreign and domestic venture funds. The fair generated $225 million investment proposals and attracted more than 1500 participants.

Tatarstan has also upgraded the legal framework, a key concern for any foreign investor eyeing the Russian market. The law ‘On Investment in the Republic of Tatarstan,” was passed last year. The Innovation Memorandum for 2011-2013 has been also signed.

" To develop the region and become the leaders, we should chatter less and work more.” Rustam Minnikhanov, Tatarstan President

These initiatives have bolstered the republic’s reputation among investors and attracted some interesting and economically viable start-up projects. During the Sochi-2011 Forum, Vneshekonombank (Bank for Foreign Economic Activity) signed credit agreements with OOO Ford Sollers Holding, Ford Sollers Elabuga (Tatarstan) and ZAO Ford Motor Company worth 36 billion roubles, which will will finance a joint venture Ford Sollers for manufacturing cars and commercial vehicles. The foreign partner will own a 50% stake and will contribute its plant in Vsevolozhsk and distribution network in Russia to the authorised capital. In the Elabuga special economic zone, the production of commercial Ford Transit vehicles and engines will use existing capacities producing Fiat Ducato vans and a plant with an annual capacity for producing 180,000 engines will be built from the scratch.