Russia's Korea pipeline: can it be Game-changer? 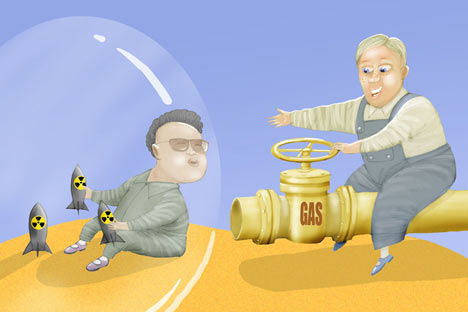 Any foreign trip by the reclusive North Korean leader Kim Jong-il arouses a great deal of interest, as he practically never leaves his country. Therefore, his recent visit to Siberia was an extraordinary event.

Since the first half of the 1990s, when the North Korean nuclear programme became a global issue, negotiations have gone through different stages but the basic model has remained unchanged. Outside forces have always perceived Pyongyang as an aberration that survived the collapse of socialism and a clear threat to its neighbours. In turn, North Korea has continued to project an image of extravagant outcast that is capable of anything, because its top leaders feel this is the only way to protect the regime against pressure and potential overthrow. North Korea has been building up its potential in the most ostentatious way so as to prevent anyone from even being tempted to test its strength. Western countries and South Korea pursued a carrot-and-stick policy. But the pressure only radicalised the regime, even though the country needed economic assistance to stave off a disaster. North Korea quickly learned that blackmail can do the trick.

However, the belief that North Korea is intimidating others to extract economic benefits has led Washington and Seoul down the wrong road. Under the current model, North Korea is promised lavish aid in exchange for renouncing its nuclear and missile programmes. This could have worked 15 years ago. But since the late 1990s, after the events in Afghanistan, Iraq and Libya, Pyongyang has viewed its nuclear weapons as the only guarantee of its security rather than as a bargaining chip. North Korea’s relations with the international community is, therefore, caught in a vicious circle.

Russia has proposed a new approach that would change the paradigm. The construction of a gas pipeline from Russia to the south of the Korean Peninsula would change Pyongyang’s status. A sponger prone to blackmail could become a partner in a major project, as was the case with Ukraine in relation to Russia and Georgia to Azerbaijan. North Korea would get not only gas, but also transit fees. But, most important, it will be brought into a system of economic interdependence that could drastically change the atmosphere in the region.

Many obstacles remain. First, Pyongyang’s behaviour follows some logic (contrary to views in the West), its vigilance bordering on paranoia carries the risk of surprises. Second, Seoul may not be happy about the deal. South Korea would also stand to gain from the project, but its government headed by Lee Myung-bak is highly critical of the reconciliation policy of his predecessors. Third, the US attitude is not quite clear.

The Russian proposal creates an opportunity for progress. And it would be in everyone’s interest to make some. But East Asia is too important, especially in light of China’s growing influence, and Washington does not want to lose the initiative. The question is whether the US will interpret the Russian proposal as an attempt to seize the initiative. China should not object, because it welcomes anything that can reduce tensions and consolidate the status quo.

For Russia, this Korean project is a real chance to enhance its position in Asia, which will be its main goal in the next few years. Moscow enjoys the advantage of being viewed as a neutral force and this suggests that progress is possible.

Fyodor Lukyanov is chief editor of the magazine “Russia in Global Affairs”.