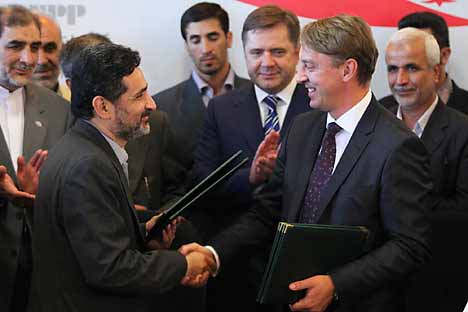 Senior Iranian and Russian officials attended celebrations September 12 for the official launch of the 1,000-megawatt Bushehr plant in southern Iran.

The country's first nuclear power plant began to generate between 350 to 400 megawatts of electricity, equal to 35 to 40 percent of the reactor's full capacity.

The Russian-built plant was connected to the national power grid for a test run September 4, generating 60 megawatts.

The plant may be operating at full generating capacity by the end of this year, said Alexander Glukhov, head of the plant's builder, Atomstroiexport.

"The expectation is that achieving 100 percent of capacity will happen by the end of 2011," Glukhov said. The station complex will be entirely ready by the third quarter of next year, he said.

The launch of the plant has been delayed for more than a decade over technical and construction setbacks.

The West has been deeply suspicious of Iran's nuclear aims. Last October, U.S. Secretary of State Hillary Clinton made a clear distinction between Bushehr and other nuclear efforts — such as uranium enrichment — that Washington worries could lead to weapons production.

"Iran is entitled to the peaceful use of nuclear power," she said after speaking at a UN Security Council meeting. "They are not entitled to a nuclear weapons program."

Russia has promised to have full oversight of the nuclear fuel used in the plant.