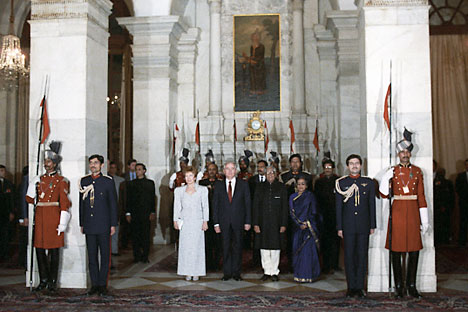 Despite some recent notes of dissonance in the India-Russia relationship, the two countries can’t but continue to bolster their time-tested partnership as it’s rooted in strong national interests and shared global worldview.

When Mikhail Gorbachev last visited India in 1988, the entire country was transfixed by their Russian visitor and his massive entourage for almost a week. The media frenzy was simply unprecedented.

How times have changed! Today, a state visit by President Dmitry Medvedev would hardly merit much coverage on Indian news channels. It’s the same story in Moscow when Indian leaders visit Moscow. Fanfare and hype are missing.

While the annual gas spats between Russia and Ukraine would be hard to beat in terms of pyrotechnics, there has been plenty of drama between Moscow and New Delhi as well.

There was a hitch though – the Russian ships were nowhere to be seen. According to the Russian brass, their ships were assisting the Japanese with rescue operations at the Fukushima nuclear plant. This is as big a snub as it gets. You don’t invite your friends halfway around the world and tell them to go fishing in the Pacific.

While naval HQ on both sides attempted to contain the diplomatic fallout, it was by now transparently clear that not all was well with the Indo-Russian friendship.

In fact, just over a month after that unfortunate incident at sea, there was more trouble – this time on land, when the Russians called off a war game involving the armies of the two countries.

It was pretty obvious that the Russians were upset because of the elimination of their MiG-35 aircraft from the $10 billion global dogfight to sell 126 combat aircraft to the Indian Air Force.

However, if the Russians were showing their displeasure, they were also doing an excellent job of shooting themselves in the foot. The IAF deal is chump change compared with the much bigger, strategic deals India and Russia are working on.

On the Indian side too there is a lot of displeasure, especially over the Russian delay in handing over the refurbished Gorshkov aircraft carrier to India. Resentment has long been brewing over Moscow’s inability to supply spares for the Indian military.

There is a small but vocal lobby in India that wants closer ties with the West, especially the US. They point out the purported benefits that would accrue from hitching India’s wagon to the American engine. For a start, they argue, India would come under the US security umbrella and be free to prosper in the manner of South Korea, Japan and Germany.

If only things were so simple. The aforementioned countries have little or no great power/civilisational ambitions like India, which also has a long history of opposing imperialism. Indians don’t want their country to be America’s sidekick, which is perhaps the role the US has in mind for it.

On a more cautionary note, American influence peddlers represent rabidly right wing groups that don’t want US sway in India restricted to trade and diplomacy. According to British-born Malaysia-based academic Iain Buchanan, “In addition, there must be infiltration of every sector of influence in a society, from religious groups to government departments to local charities to private business.”

Many of these right wing groups were running amok in Russia after the dissolution of the Soviet Union, trying to shut down the crown jewels of Russian industry. Buchanan says these groups promote a brand of economics “which stresses individual profit, corporate obedience, the sanctity of making money”. It is precisely the kind of voodoo economics that has brought down Wall Street and turned America into the most unequal society on the planet. The World Bank and the IMF too have been trying to ram this version of capitalism down India and Russia’s throats.

Despite the headline-grabbing troubles that have frayed nerves in Moscow and New Delhi, both countries have continued to focus on improving ties because of historical reasons. In the 1950s when India’s state-owned oil explorer failed to strike oil offshore, it called in US oil experts. The Americans scanned the offshore basin and pronounced it “hydrocarbon barren”. Thankfully, India’s oilmen didn’t believe them. In 1964, the Russians brought in their seismic exploration vessel Academic Arkhangelsky, which discovered the mighty Mumbai High Field, still the largest contributor to indigenous crude oil production.

Russians have always stood by India, supporting New Delhi with numerous vetoes at the UN. India has reciprocated and despite intense international pressure refused to condemn, for instance, the Soviet Union’s invasions of Hungary and Afghanistan. It didn’t make India very popular in the Beltway, but then, Washington wasn’t paying India’s rent.

Russia has had a profound influence on Indian thinking. It was only in 1955 when Nikolai Bulganin visited India – eight full years after the Indians kicked out the British – that New Delhi’s street names with an imperial flavour were changed; such as Queensway, which became Janpath (People’s Road).

Both countries have a multiplicity of interests. There are plenty of excellent reasons why they should develop their strategic partnership further.

What’s in it for India?

What’s in it for Russia?

As of now Russia is not an aspirational focus for Indians in a way that America – or even Germany and Japan – is. The same can be said about the perceptions of Russian youth about India. But as the world’s economic landscape shifts in favour of India, China and Russia, so will perceptions.