Out of the woods, a new opposition lights the fire 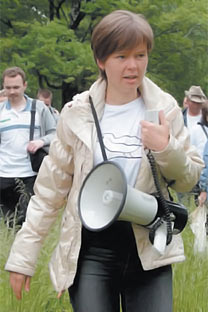 Evgenia Chirikova entered politics to protect a forest near her home from a highway project. Source: Photoshot / Vostock Photo

Growing outrage at both ecological damage and the erosion of civil rights has bred a new type of activist, providing an alternative to traditional opposition.

Not many knew about Evgenia Chirikova, a resident of Khmiki in the Moscow Region outside her circle of friends and family. But the 34-year-old mother of two has now transformed into one of Russia’s best known activists crusading against ecological degradation.

The narratives differ, but the story of Chrikova should strike a chord in India which has recently witnessed huge mass protests led by Anna Hazare, a 74-year-old Gandhian activist who became a national icon after the parliament agreed to accept his demands for a stronger anti-corruption legislation.

Armed with three college degrees, Chirikova ran a small business with her engineer husband, and had no interest in politics. “I didn’t think it was possible to change anything, so politics seemed a senseless endeavour,” she says. The turning point came in her life after the Moscow city government decided to bulldoze the forest by her house to build a highway to St Petersburg. She became interested in the forest after her second daughter was born. “Suddenly I had time to look around, and I realised that while I was working and paying taxes, somebody else was using that money to destroy my habitat.”

Chirikova gathered local residents together and spoke out in favour of rerouting the highway; ecologists later came up with 11 alternative routes. Bureaucrats reacted to this initiative with bewilderment, while many local residents were suspicious: an international multimillion-dollar project had never been stopped by concerns over a forest before. “The Khimki administration didn’t understand what we wanted,” she explains. “‘If you want to live in the woods,” they said, “go to Siberia.” During the conflict over the Khimki Forest, 10 activists were injured by unknown assailants. Chirikova, too, received anonymous threats, but she refused to give up.

“It’s the bureaucrats who turned me into an opposition leader. I became a citizen very late, at 30,” she says.

During his presidency, Prime Minister Vladimir Putin approved the construction of the highway in 2009. That same year Chirikova, with the opposition’s support, ran for mayor of Khimki on a single platform – the rerouting of the highway.

She came third, but the views of her supporters show that there is a demand in Russian society for specific problems to be solved, says Alexei Mukhin, head of the Centre for Political Information. “That’s why traditional opposition movements, afraid to switch from slogans to actions, are losing popularity,” he adds. The fight for Khimki Forest ended in a decision to narrow the route from 600m (1,970ft) to 100m (328ft), and prohibit commercial construction on either side of the highway.

One of the people who doubted Chirikova’s chances of success was Alexei Navalny, a lawyer and blogger who has become famous for fighting corruption in state companies. Several years ago, he was a member of the liberal party Yabloko, and worked on a committee to protect Muscovites. “People came to me complaining about the construction of a highway in Khimki,” he says. “My answer then was that it was senseless to get involved. "

Today, he is an active supporter of the Khimki movement, and helps members make sense of the competitions to build the highway, in which, according to Elena Panfilova, head of the Russian branch of Transparency International, “corruption is a large component”.

Navalny became famous through actions rather than words, defending the rights of minority shareholders in large state companies. He and she are the same age; neither of them are affiliated with any political party; both prefer to work independently as activists, attracting supporters from across the political spectrum.

They are a new kind of opposition in Russia, orientated toward solving real problems, says Nikolai Petrov of the Moscow Carnegie Centre. “If with Evgenia it’s the transformation of a civil position from a private protest, then Alexei targets political activity at the outset,” he said. Mukhin says both Chirikova and Navalny “have the image of a popular leader responding to public  despair”.

They are now ready to share their experience. In June, they participated in a four-day workshop in the Khimki Forest that attracted more than 3,000 people of all political shades. The workshop aimed at creating a dialogue between different political and civil forces, and to “give Russian citizens real knowledge about how to defend their honour, dignity and rights in this country”. The organisers want the workshop to be an annual event.