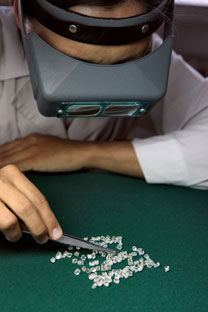 Indian companies are planning take part in the privatisation of ALROSA.

The Indian state-owned Minerals and Metals Trading Corporation (MMTC) may buy a stake in ALROSA as part of the latter’s privatisation. Delhi officials have discussed the prospect of buying into the Russian diamond-producing concern with the Russian Ministry for Economic Development. India specialises in exporting small hand-cut diamonds, holding 95% of the world market for these.

The Indian government is poised to take part in the Russian privatisation programme and Indian companies are contemplating buying a stake in the Russian diamond company ALROSA. The final decision will be made after an audit has been conducted of the Russian corporation, The Economic Times newspaper sources say, citing the results of the consultations at the level of the Indian ministries of finance and trade. “The government wants to double-check everything before the national companies makes any bids,” a government spokesman said.

The main bidder is likely to be the Indian state-owned corporation MMTC. The Indian authorities are also considering the possibility of two or three companies entering a collective bid, sources say.

The Russian government is planning to sell 50.9% of the shares but retain control of ALROSA through the “golden share” mechanism.

The sale of government shares will be coordinated with sale of the 32% stake owned by the Republic of Sakha (Yakutia) and 8% of the shares owned by Yakut regions, “with a view to using the proceeds from the privatisation of the shares to develop the region’s infrastructure.”

Earlier, ALROSA reported that it was planning to go public by floating 20-25% of its shares in 2012, in order to raise $3 billion. The company intended to use the money to reduce its debt and invest in the Timir project. The results of the first six months of 2011 have shown, however, that the company can still manage without going on to the market: its net profits rose 5.5-fold compared to the first half of 2010.

India is interested in the Russian company because it may supply raw materials for a key Indian industry. India specialises in exporting small hand-cut diamonds and controls 95% of this world market. Its exports in 2010-2011 amounted to $28.25 billion. The industry employs 500,000 workers.

80% of ALROSA’s diamonds are suitable for India’s purposes. The government expects that permanent supplies from Russia will boost the sector and create new jobs.

The analyst thinks a quarter of ALROSA would be worth $3-4 billion.

Earlier, on the contrary, the government did not rule out that the privatisation might be postponed owing to the instability on the financial markets.