Armed with 5G jet features, Super Sukhoi on the way... 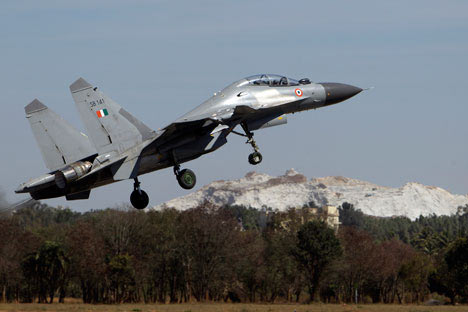 With Russia's help, Indian Air Force is set to transform Su-30MKI fighter jets into the near invincible 'Super Sukhoi' in a joint venture.

The Su-30MKI fighters, deployed by the Indian Air Force, will be upgraded with certain fifth generation aircraft characteristics to convert it into a “Super Sukhoi”, Alexy Fedorov, President of Irkut Corporation of Russia announced during the MAKS 2011 international aviation show held in Moscow recently. The IAF currently deploys about 100 Su-30MKI fighters, with plans to increase their number to 230 aircrafts. Bangalore-based Hindustan Aeronautics Limited (HAL) holds a production certificate for manufacturing the fighters and will be in-charge of upgrading the SU-30MKIs to 5G Super Sukhoi jets. The modernisation will embrace the aircraft in IAF’s military bases, fighters waiting for delivery to India and the jets that HAL will be manufacturing. The United Aircraft Corporation and HAL have signed a deal on creating substantially upgraded prototypes. Fedorov did not specify the cost of the modernisation, highlighting that the companies were still negotiating. Su-30MKI jets are a part of two major modernisation programmes, one of which aims to adapt the Su-30MKI to BrahMos supersonic missiles, while the other seeks ways to achieve a dramatic improvement in the fighter’s performance.

India will see its fighters modernised within the framework of the so-called Super programme, which involves introduction of an upgraded pilot cockpit, new radar and several structural elements enhancing the jet’s stealth features that make it less visible to the enemy. The upgrade will cover all aircraft employed by IAF, increasing the Su-30MKI’s weapons load and list.

The modernised Su-30MKI is reported to be able to carry under its body one BrahMos missile, which is expected to weigh less than its land-based and naval counterparts. The Russia-India joint venture Brahmos Aerospace Private Limited, Sukhoi Holding and HAL are jointly engaged in developing the airborne version of the missile. Sivathanu Pillai, CEO of the joint venture, said he hoped to see BrahMos missiles launched from the aircraft in late 2012.

According to reports, the IAF plans to upgrade 44 Su-30MKI fighters to equip them with BrahMos missiles. Ruslan Pukhov, director at the Centre for Analysis of Strategies and Technologies, believes that mounting BrahMos missiles on Su-30s will add export value to both the weapon and its carrier. As various modifications of Su-30 jets are in service with many armed forces all over the globe, transforming these highly-manoeuvrable air fighters into fully-fledged missile carriers appears promising – an idea that Dr Pillai supports to the hilt.

The Super Sukhoi project, therefore, will allow the latter to transition swiftly to fully capable 5th generation fighter jets. The cost of the modernisation remains uncertain but the price tag could be around $1 billion.

The HAL is optimistic about its participation in the development of technology for the Fifth Generation Fighter Aircraft (FGFA). The prototype of this aircraft, the T-50 PAK FA, was exhibited at the MAKS 2011 air show. India will be one of three countries in the world, alongside the US and Russia, to have fifth-generation fighters.

HAL chairman Ashok Nayak, who visited MAKS 2011, confirmed that his company’s participation in the design of the FGFA was “the right thing to do”. In December 2010, Russia and India signed an agreement on preliminary designing of the aircraft, estimating the project at $295 million. The initial design will take approximately 18 months. The Indian model’s main difference will be a two-man crew. “HAL hopes to complete the initial design and move further,” Nayak said, adding that the use of Indian components would be determined later. The IAF will be the first foreign customer to buy the new jet. India has announced plans to buy 250-300 fighters of this type, with the first deliveries expected in 2016-2017. The cost of the project is likely to exceed $35 billion. Russia will buy approximately the same number of the aircraft.

Su-30MKI jet will be armed with BrahMos missiles by 2012.