Khabarovsk: A Mediterranean Dream in Russia 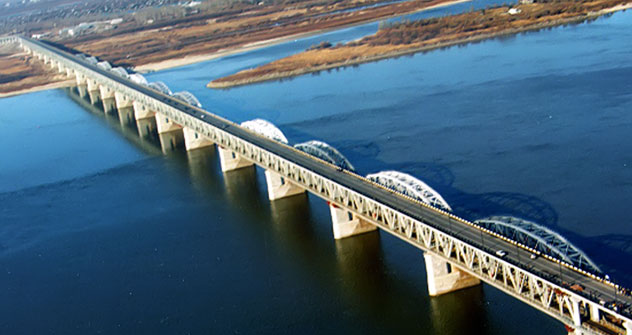 Imagine an autumn full moon over the majestic Amur River, reflecting on the golden domes of a nearby cathedral. Khabarovsk mingles romance, history and fabulous forests, making this European city in Russia a magnet for tourists.

Sparkling new cathedrals that blend in with fine 19th century architecture, a thriving cultural scene, and the proximity of the Taiga make this city on the great Amur River one of the most diverse in Russia.

With traces of some of the great cities of the Baltic Coast, you’d easily be mistaken for thinking you are 8000 kilometres away from the Russian Far East, but just 30 kilometres separate Khabarovsk from Manchurian China. There is, however, no hint of Asia in this city of 620,000, the last major stop on the Siberian railroad before Vladivostok.

Founded in 1858, everything from its broad tree-lined avenues, pre-Soviet heritage buildings, trams, quaint cafes, squares with fountains and a buzzing riverside, is redolent of Europe.

The city has a laidback Mediterranean feel in the summer, with sun-bathers thronging the riverside beaches to work on their tans. While summers are even hotter and more humid than those in Mumbai, temperatures plunge sharply in the winters and average around minus 30 degrees Celsius. If you like, you can take long walks on the frozen Amur river.

Famous for its ornate fountains, the city’s Lenin Square attracts hordes of skaters, local artists and families in the evenings. In the winters, the square hosts ice sculpture festivals and one of the largest New Year trees in the region.

Khabarovsk is just the perfect city you can explore through leisurely walking. Another relaxed way to savour life in the city is to take its trams, which connect the city centre to many outlying areas.

While walking through the Muravyova-Amurskovo Street, you encounter fine brick buildings from the 19th century as well as pre-Russian Civil War architecture that has been painfully preserved by the proud administration of the city.

The city literally breathes history. The Muravyova-Amurskovo Street, for example, has five museums. The regional history museum is probably the best in the Russian Far East and showcases the culture of the indigenous people of the region, besides an excellent section dedicated to the Russian Civil War. The brick building was built in 1894 and lived to tell the tale of the brutal war between the Reds and the Whites.

While the city is proud of its Soviet past, with several monuments dedicated to the USSR and the partisans, who fought against foreign armies, there has also been a religious renaissance in Khabarovsk. Viktor Ishaev, a former governor, played a large role in the reconstruction of Russian Orthodox Churches, destroyed during Stalin’s purges. The imposing Uspenya Bozhey Matery (Divine Mother of God) Cathedral is one such replica and is just above the riverfront.  The city is home to the largest Orthodox Church in the Russian Far East: the golden-domed Church of the Transfiguration, which is probably the most visible building one sees from the aircraft, while landing in the city.

A stone’s throw away from the Transfiguration church is the majestic World War II memorial. It stands as a testament to the patriotism of the citizens of the Russian Far East, who lost their lives in the war against Nazi Germany, thousands of kilometres away from their hometown.

Most of the city’s attractions are close to the riverside, including a central park that stretches for about 1.5 kilometres to a hill top from where you get the best views of the city. The city owes its existence to Count Nicholai Muravyov-Amurskiy, and there’s a large statue of the founder, who was the governor general of Eastern Siberia. The area around the statue is a favourite spot for couples and when it comes to romantic settings, very few places in the country can match the sight of an autumn full moon over the Amur River, reflecting on the golden domes of a nearby cathedral.

The riverside is buzzing with activity, and has several cafes and restaurants with live rock bands performing late into the night.  There are also several hydrofoil services for those that want to cruise the Amur. A 90-minute cruise is a wonderful way to observe the illuminated riverside architecture at night, but there are longer cruises north to the cities of Komsomolsk-na-Amure and Nikolayevsk-na-Amure. These cruises are a great way to explore some of the most stunning and sparsely populated areas in all of Russia.

No trip to Khabarovsk is complete without a picnic in the forests near the city. Many residents of the city have summer cottages or ‘dachas’ in an area called Voronezh-1, an ideal place for a barbeque, beer and folk music. There are several forest trails in the area, which is strikingly beautiful in the autumn.

However, those seeking adventure head straight for Peak Heksir, which is only about 970 metres above sea level but is a difficult trek through thick forests. The great Ussuriskaya Taiga begins in this forest, which is home to the Amur Tigers, the largest tigers in the world. The tigers have the advantage of camouflage in the autumn, but can be spotted in the winter, when blankets of snow envelop the mountain range. The forests are also inhabited by the Amur leopards, who are incredibly difficult to spot.

The path to Heksir offers splendid views of Khabarovsk and the domes of the city’s cathedrals are visible from the peak. But the piece de resistance of Heksir is the view of the Russia-China border.  The last stretch of Russian territory is at the intersection of the Amur and the Ussuri rivers. All you can see of China is a stretch of forests and there aren’t any human settlements for miles from the border.  Special permissions need to be arranged for both Russians and foreigners to climb the peak, since it’s in a politically sensitive area.

Khabarovsk is also close to the isolated Shantar Archipelago, a string of islands, which are only accessible in the non-winter months. This group of 15 islands in the Sea of Okhotsk are famous for their rocky cliffs and spruce forests. The archipelago is a wildlife lover’s paradise in the summer. You can spot Bearded Seals, Bowhead Whales and the endangered Western Grey Whales. Bears are aplenty in the islands, but unfortunately, each summer, there are reports of campers getting killed by bears. Wildlife experts attribute many of these cases to reckless behaviour on the part of tourists from cities. The islands are accessible by helicopter from Khabarovsk as well as via fishing trawlers that make the most of the four months a year they have before the ice flows merge the archipelago with the mainland.

Ajay Kamalakaran was the editor of The Sakhalin Times from 2003 to 2007.