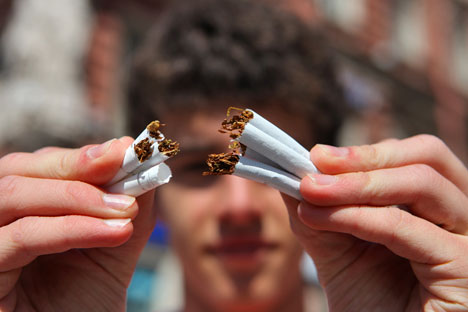 It's almost impossible to be a non-smoker in Russia - if only because everyone smokes everywhere.

It seems as though the anti-smoking drive has finally reached Russia. The Ministry of Health and Social Development has thrashed out a fairly tough bill that will not only ban smoking in public places and raise tobacco prices, but also remove cigarettes from shop windows and counters. It will still be possible to buy them, but smokers will have to select them from a special catalogue and not from among colorful packs on display.

The measures, however, will take effect gradually. Cigarettes will disappear from shop counters as early as 2013. Smoking on long-distance trains and in smoking lounges at airports and railway stations will be banned starting in 2014. Beginning in 2015, smoking will be banned in cafes, restaurants and nightclubs. Even movies and TV shows featuring characters smoking will be outlawed due to a ban on shooting and showing smoking scenes. Office smoking rooms are also likely to be “moved” outside. As a result, smokers may find themselves with only one place they can smoke: their own apartments. Those who are unwilling to pollute their homes and are accustomed to smoking on stair landings will have to obtain permission from their neighbors.

It’s no surprise that these drastic measures have sparked significant public response in the blogosphere. Both supporters and opponents of the total smoking ban have spoken out emotionally and even aggressively. Inveterate smokers said they would never quit under any circumstances and would not have their right to a portion of tobacco smoke violated. Non-smokers, in turn, complained that they have no peace with smokers around, since secondhand smoke is impossible to avoid.

Truth be told, Russia has been, until recently, a haven for smokers and cigarette manufacturers. According to statistics, Russia is near the top on the list of world tobacco consumption – 72 percent of men and almost 35 percent of women are smokers. The figure has already climbed to 50 percent among teenagers. One of the key reasons for the smoking epidemic is the total availability of cigarettes. Currently, cigarettes can be bought cheaply on almost every corner. For instance, a pack of Marlboros costs $1.80 in Russia – significantly less than in Europe or the United States. And to top it all off, the cheapest cigarettes in Russia cost about 17 rubles a pack – just over 50 cents.

It is fairly difficult to be a non-smoker in Russia, if for no other reason than that it is almost impossible to avoid secondhand smoke. You can inhale a mouthful of smoke if you take the elevator after your smoking neighbor. Or at a bus stop. Or even in your own apartment, especially in summer when all windows are wide open, if your downstairs neighbors are regular smokers. And among friends, all a non-smoker can do is to step out onto a balcony once in a while for a breath of fresh air. The most to be expected of his or her smoker friends is to try to blow smoke away from their face – which, incidentally, does not protect against secondhand smoke.

In recent years, the government has become acutely aware of national health problems and moved to discourage smoking, mostly through propaganda. Cigarette packs now feature warnings, and on television, showbiz stars are urging young people to quit smoking. Judging by the statistics, these appeals have fallen short of their goal: Smokers have continued smoking. Last year, the Ministry of Health and Social Development published on its website a non-smoking map of Moscow showing establishments where smoking is banned. So far, there are only 108 non-smoking restaurants and cafes – not many, when you consider that Moscow has more than 2,500 places to eat out.

It appears that the only anti-smoking measure that might be effective is increasing cigarette prices. It is presumed that the cheapest tobacco will rise in price from 17 to 61 rubles ($2). And although according to an opinion poll, 56 percent of smokers are nevertheless determined to stick to the habit, many of them are likely to cut back on cigarette consumption.

This is precisely why an acquaintance of mine who moved to the United States in the 1990’s quit smoking. He said that he fell swiftly out of love with cigarettes when the price for a pack of Marlboros jumped from the customary $2.50 to almost $12 in New York. He welcomes the forthcoming smoking ban in Russia. He says he would at least be able to attend football matches without regretting that he hadn’t brought a gas mask along.