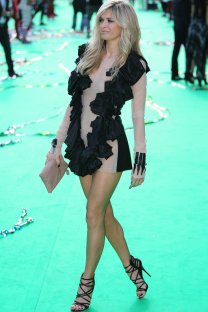 Soviet women washed dishes with soda and salt for decades, while men never heard of deodorant and teens scrubbed their pimples with soap and water. Not anymore. Western consumer goods companies have flooded what remains in many aspects a virgin market, spending tens of millions of dollars to research consumer habits and conduct increasingly elaborate marketing campaigns aimed at selling products that many Russians never imagined needing.

The companies, such as Reckitt Benckiser, a British consumer goods firm that recently rolled out an advertising campaign for Calgonit dishwasher tablets, view their efforts with an educational slant. “We are launching a comprehensive brand campaign to raise awareness for Reckitt Benckiser in Russia,” said Andraea Dawson-Shepherd, Reckitt Benckiser’s senior vice president of corporate communications. Polish consumers, for example, spend six times more on dishwashing tablets, because dishwasher penetration in Russia is very low, according to company research.

Reckitt Benckiser spends about 12 percent of its $440 million revenue from Russia and other former Soviet countries on consumer research, marketing and advertising, said Bruno de Labarre, the company’s general manager for the former Soviet Union.

Nestlé opened an innovation center in Russia last year to study customer behavior more closely. The center includes a mock shopping area, a kitchen and special rooms to make drinks. The company invested a total of $35,000. Nestlé has put out several products to meet the needs of the Russian consumer looking for healthier food, including ice cream called 48 Kopeks modeled on a Soviet-era brand and Bystrov Prebio instant hot cereals.

In trying to sell these products, the company has to change consumers’ perceptions. In the case of Calgonit, it is changing women’s attitude toward washing dishes, which has always been considered a natural part of home life, said Tatyana Komissarova, dean of the Higher School of Economics’ School of Business and Marketing. She said Western companies have succeeded in some areas, such as replacing soda and salt with dishwashing detergent. “If someone doesn’t have it, it’s like, are you cheap?” she said. The same goes for Clearasil, the anti-acne treatment made by Reckitt Benckiser. Most teenagers now use Clearasil, instead of plain soap and water just a little more than a decade ago.

The best marketing campaign, however, doesn’t guarantee a product’s success. After the Calgonit TV commercial, Reckitt Benckiser rebranded the dishwashing tablets as Finish.Reckitt Benckiser hopes for 15 percent annual growth in Russia and the Commonwealth of Independent States, and to double sales by 2016.

Unilever, the British-Dutch consumer goods giant, found that the amount of deodorant the average Russian uses per year is less than one unit, which is considerably less than in Western Europe, said Yegor Yevteyev, senior brand manager for Rexona, a deodorant brand owned by Unilever.

This is a huge opportunity for the company, which has blanketed Russian television airwaves with a Rexona deodorant commercial in which blond and beautiful pop star Vera Brezhneva asks, “What do you do to be perfect?” Before kicking off the campaign two years ago, Unilever surveyed Russian women on who they believe to be the perfect woman — successful, beautiful and feminine — and they chose Brezhneva. “When advertising personal care products,” said Yevteyev, “we try to educate the consumer on the necessity of following the basic rules of hygiene.”

Before releasing products on the market, companies conduct much painstaking research, and often adjust their merchandise to customer tastes. Company representatives watch shoppers in stores, distribute questionnaires, visit consumers in their homes and hold forums to study shopper behavior.

Several years ago, after Procter & Gamble research showed that there is no universal cleaner on the market, the U.S. company introduced Mr. Proper, the Russian version of popular American all-purpose floor cleaner Mr. Clean. The company also found that Russian consumers are very sensitive toward the smell of the products they use. Procter & Gamble adjusts the smell of household products such as laundry detergent, fabric softener and cleanser to make them more attractive.

There is more competition among companies now and a wider range of products, and Russian consumers have become more aware of what they buy, said Dale Clark, a retail and consumer specialist with PricewaterhouseCoopers. Advertising has grown significantly in the past 10 years but accelerated in the last five, he said.

Begemot advertising agency head Yulia Dydichenko said a new trend toward more sophisticated advertising emerged about a year ago. New products, such as flower-scented toilet paper and cosmetic products for men, are filling niches that had never existed in the country.

Today’s Russia, in terms of consumerism, is a lot like the post-Reagan United States of the early 1990s, when the vast consumer service industry was in its infancy, Komissarova said. As more products and services are offered, companies will have to continue to innovate or fall behind. Russia will reach Western consumer standards very quickly, said Denis Shirikov, a retail analyst with Nielsen, which tracks consumer habits in more than 100 countries.