Pastila: The delicacy of yesteryear 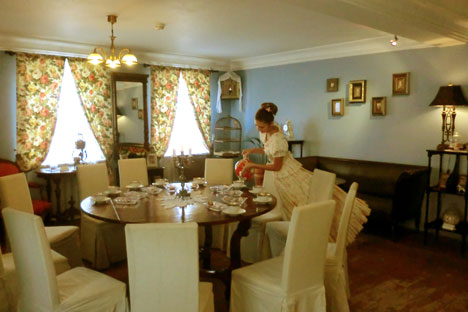 In the museum of pastila. Source: Flora Moussa.

Developed as a way to preserve apples through winter, there are more than 50 different recipes for pastila.

The recipe for the pastila, a sweet paste made from apples, was a better-kept secret than the location of Soviet nuclear submarines. Today, however, foreign tourists – as well as spies – are more than welcome at the Museum of Forgotten Flavors, situated in the picturesque town of Kolomna, one hour’s drive from Moscow. This museum is dedicated to pastila, this famous delicacy that once delighted taste buds of Ivan the Terrible, Catherine II, Fyodor Dostoyevsky and Tolstoy.

The base of the pastila is apple flesh, but various ingredients such as honey, nuts or local berries are added to create the finished product. The treat was created in Kolomna as a way to preserve the apples that blanketed the city in the fall for the rest of the year. Altogether there are about 50 different pastila recipes. Aspects, colors and consistencies vary depending on the ingredients. The pastilasometimes evokes memories of French fruit jams, candied fruits and sometimes even small pastries, but once in contact with your palate, their originality can no longer be questioned. This treat will delight those who are concerned about what they eat; it is rich in fiber and pectin, low in calories, and is prepared exclusively from natural ingredients. But it should not be considered an alternative to junk food – the pastila is produced only in a small craft factory operating as part of with the Museum of Forgotten Flavors.

But the museum celebrates more than the simple pleasures of taste. "For us, it is about recreating the culture of chivalry that existed in the 18th and 19th centuries," said Irina, a museum guide, dressed in an 18th century costume. The museum is housed in a charming wooden house not far from the Oka River. In every room, the appetizing smell of apple and cinnamon floats around. Visitors to the museum are served tea with a slightly bitter sweetness, which ideally compliments the seven kinds of pastila offered. In the future, there are plans to serve additional dishes while listening to the city's history told by a guide. The most serious apple fans can wash their pastila down with French cider.