A requiem for politics 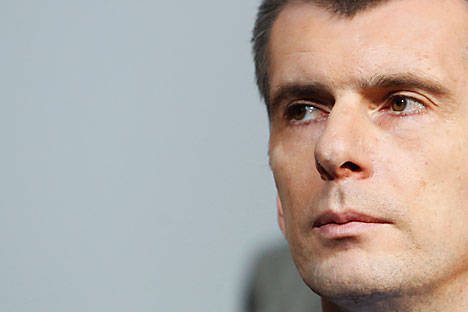 With the addition of Mikhail Prokhorov on the political scene, liberals might have had someone to vote for -- not anymore.

It’s a real shame, but it seems that politics are over in Russia. Even on the eve of the fateful Right Cause conference, it was still debatable whether public politics had ever existed at all. Common sense and good taste alone prevent anyone from regarding the parties represented in the State Duma, and even Yabloko, as genuine political forces. These stooges really showed what they were about in the recent debates on NTV. It’s disgusting to watch them, let alone vote for them. It was a very different story with the Right Cause party.

With Mikhail Prokhorov’s arrival on the scene, the electorate at least had some choice. You could, as usual, decide that there was no point in voting. But you could just go along for the sake of it and vote for Right Cause. On the one hand, you’d still have to turn a blind eye to a lot of things: to their links with the Kremlin, the nationalistic absurdity of the party’s manifesto, and also to Yevgeny Roizman, the highly dubious anti-drugs crusader, who the party leader seemed to hold in such high esteem. But on the other hand, it was obvious that these people were not just in it for the money, and that, perhaps, they could have started to promote a more liberal agenda and generally raise the professionalism of the government, which currently presents an even bigger problem than all the others facing the state: authoritarianism, parochialism, and corruption.

It could be some time before we can pinpoint who exactly Mikhail Prokhorov talked to and exactly what arrangements were made that enabled him to take the helm of Right Cause. Whatever was behind the decision to remove Prokhorov as the party leader is not the main issue here. What is important is that, with Mikhail Prokhorov’s exit from Right Cause, liberal voters in Russia are left without any kind of political force to vote for, or indeed, to support. Now Right Cause is of no more interest than the Liberal Democratic Party of Russia (LDPR) or the Communist Party of the Russian Federation (KPRF), and whether or not some voters happen to pledge their allegiance to this party in the Duma elections is of absolutely no consequence. It’s a real shame.

On Sept. 15, Mikhail Prokhorov openly announced that he was planning to operate outside the state system, though he did make a point of emphasizing that he is definitely not in opposition. Opposition or no, today in Russia it is impossible for political forces to function independently of the state. So they sort of exist, and you can get to know really nice people at their meetings. But their political clout is zero. The only people who can hold public attention and have any kind of influence at all – both in the electorate and on the agenda of the day – are social activists who are also public figures. Strictly speaking there are two such people: Mikhail Khodorkovsky and Alexei Navalny, and at a pinch you could also add Evgenia Chirikova to this list. But there are still no “political movements” per se. All attempts to create a vaguely functional political organization outside the state system – one that could rally support and construct a convincing political brand – have endured nothing but crushing defeats over the past decade. The state stands in the way of new organizations, and not only political ones. This is not just because registering a political party is literally an impossible feat: Procedures written in the law of the country are such that the Cerberus-like Minister of Justice will definitely be able to pin some sort of violation on the founders of these organizations. Even the simple task of finding a venue is choked in red tape: it suddenly transpires that to hold a meeting or a press conference, you won’t even be able to rent an auditorium in the local community building. In these conditions, the only people who are going to be at all effective are underground fighters like the National Bolsheviks and other kinds of radical nationalists. “Decent” liberals will immediately be relegated to society’s laughable fringes.

Prokhorov is the first Russian of adequate means and influence to directly announce his intent to go into politics independently. Before his arrest, Khodorkovsky, though never hiding his interest in politics, continued to be officially a lobbyist. Prokhorov claimed his most pressing political goal was to oust the “grand puppet master” Deputy Chief of Staff of the Presidential Administration Vladislav Surkov, and his first independent step towards this aim was a consultation on the issue with President Dmitry Medvedev and Prime Minister Vladimir Putin. In fact, Prokhorov had also had meetings with the president and prime minister before this, and the recent conference and break up of the Right Cause party showed what the agreements Prokhorov came to with them were really worth. Now the only person who believes the story about Surkov, who took things too far, is probably Prokhorov himself. After a consultation with Medvedev and Putin, everything should go back to normal. Prokhorov will either have to calm down, or lie low for a bit. The system is built in such a way that there is no third option.

Originally published at snob.ru in Russian.