ISS crew back on Earth 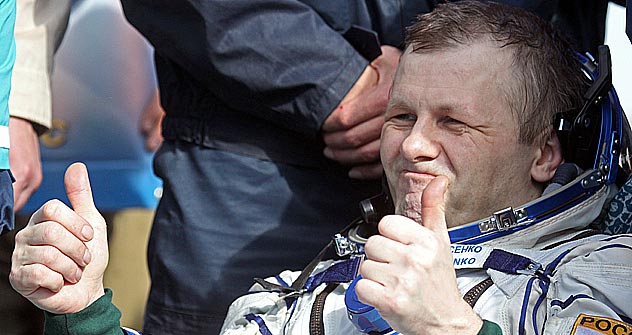 A Russian manned spacecraft has landed in Kazakhstan, bringing three members of the International Space Station crew back to Earth. Their five-month mission has been one of the busiest times in the history of the ISS.

Search and rescue teams helped the ISS crewmembers from the capsule. All the cosmonauts are said to be in a satisfactory condition.

Seventeen helicopters and planes of the rescue services were on hand as the capsule landed. Helicopters will now take the cosmonauts to the Kazakh city of Karaganda, where the Russian cosmonauts will board a special flight to Chkalovsky airport near Moscow, and the American, Ronald Garan, will leave for the United States directly.

The Soyuz TMA-21, named after Yuri Gagarin, left Baikonur Space Center on April 5 and arrived at the station two days later. On its busy mission in orbit the crew welcomed the last American shuttles Endeavour and Atlantis and carried out a number of other mission tasks which included a spacewalk, planting wheat and tomatoes in the station’s greenhouse, and repairing its oxygen- producing system.

They also installed special equipment on the Russian segment of the space station that will transmit large volumes of scientific information to the Earth via laser connection.

The crew also experienced a few cosmic adventures: at the end of June, they had to take refuge inside two Soyuz spaceships when the ISS came dangerously close to a mass of space debris.

The crew had been due to come back on September 8 but its return was delayed due to the crash of the Progress cargo carrier on August 24. An investigation into the causes of the crash is still ongoing.