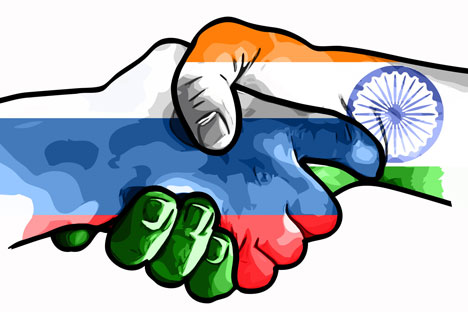 At the Partnership in a Global Format forum Russian and Indian experts discussed the role of two countries regarding global and regional security problems, economic cooperation, interaction within BRICS and other issues.

Opening the forum, which took place in Moscow on 12–13 September, Vyacheslav Nikonov, managing director of the 'Russkiy Mir' (Russian World) Foundation, said that we live in a fast-changing and increasingly unstable world. In his opinion, one of the key factors behind the instability is the current economic crisis, from which the world has not yet emerged. The slowdown of the world’s leading economies, above all the USA and the European Union, makes the appearance of new crisis zones more likely than in the previous decade. Now these include not only the Middle East, but also North Africa, as well as the USA and Europe.

While the USA is experiencing a serious government crisis, a budget deficit and a low employment rate, the Old World, in addition to lackluster economic performance by many European Union members, suffers from too much bureaucratic government. A serious recent challenge to Europe is the crisis of the multicultural model, the failure of which has been admitted by the leaders of the main European democracies – France, Germany and Great Britain. But whether the multi-cultural model is dead or, as witnessed by the Indian example, it merely does not work in the European countries alone, remains to be seen, Nikonov believes.

The developments in the Middle East and North African countries, too, do not lend themselves to a cut-and-dried assessment, the political scientist noted. The events of recent months can be equally described as “the Arab spring” and “the Arab autumn”, but it is already clear that they have led to a rise of radical Islam. Paradoxically, it is these forces that the West supports.

Nikonov is convinced that the Internet, which has emerged as a potent factor influencing global politics, is another major challenge. This is highlighted by the role played by social networks in organising the populace during the Arab revolutions, the WikiLeaks situation, etc. It is no accident that the USA has developed a concept for cyber-security. There is no doubt that, from now on, the fight against cyber-weapons will be a new item on the agenda.

Speaking about the positive development factors, the Russian expert noted the creation of BRICS, whose members have growing economies. Regarding the Russian situation, he singled out two issues: the economic crisis and the upcoming elections. On the whole, Vyacheslav Tikhonov expressed the hope that Russia had substantial reserves in the crisis period and that the elections would not rock the political system.

Against the backdrop of the crisis of the former world leaders – the old Western democracies, other states, including India, are becoming increasingly active in the world arena.

In his speech, Harihara Subramaniam Visvanatan, a senior research fellow with the Observer Foundation, presented the Indian vision of security problems, which is, in many ways, similar to the Russian vision. India is concerned about the events in the Arab countries, where active use is made of military force. Another problem is nuclear security, which again came to the fore in the wake of the Fukushima nuclear plant disaster. The Indian expert is worried about the situation in Afghanistan after NATO and USA withdraw, as President Barack Obama has already announced. The difficult situation in many European Union countries, possible UN recognition of the Palestinian state and subsequent developments in the region – all these give the Indian political elite cause for concern.

The head of the Russian World Fund regional programmes, Georgy Toloraya, stressed the importance of creating a new global security architecture and the relevant interaction mechanisms.

MGIMO Professor of international relations and foreign policy Yuri Dubinin spoke about the common agenda items for India and Russia. In his opinion, there are four substantial problems, two global and two regional, which are equally important for Russia and India. It is in these spheres that interaction should be established above all. Russia and India must coordinate their policies on the Afghan-Pakistan problem. In Dubinin’s view, neither Russia nor India relishes the prospect of non-regional forces gaining a foothold in that part of the world. At the same time, if the coalition forces withdraw from Afghanistan, the situation in the region causes serious concern. The policy with regard to Iran, another strong player in the region, also needs to be coordinated. The global threats that require cooperation include terrorism (as well as piracy) and Western attempts to demonise China, which is a BRICS partner of Russia and India.

There are more than enough thorny issues in both regional and global security, Russian and Indian experts agree, in addition to those already mentioned. Limiting short- and medium-range missiles, nuclear non-proliferation, the North Korean factor and India’s far from cloudless relations with China were discussed in Moscow.

Among the many other issues discussed at the forum were bilateral relations between India and Russia and their cooperation within BRICS; the interaction between the two countries on the world energy, food and commodity markets; reform of the world financial system and response to global climate change.

The forum was organised by the 'Russky Mir', 'Edinstvo vo imya Rossii' (Unity in the Name of Russia) and 'Politika' (Politics) funds and the Indian Observer Research Foundation. The cooperation between the Russian funds and the Indian Observer goes back to 2007, when a conference “Russia-India: from Partnership to Cooperation” was held in Moscow. Since then, three such forums have been held alternately in Delhi and Moscow. This was the fifth.