The right path leads to a dead end 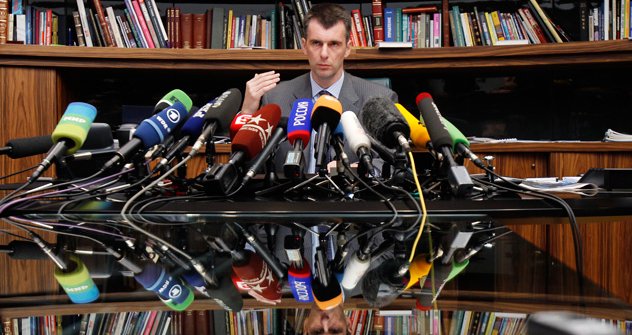 Just months after entering politics, Mikhail Prokorov is dismissed as head of Right Cause. Trace the progress of his political career.

The pro-business, liberal Right Cause party has splintered even before it could mount a real campaign for the December State Duma elections. Many commentators blame the Kremlin, which they claim charged billionaire Mikhail Prokhorov with the task of heading up Right Cause in the spring but, by the fall realized that he was not as docile as once thought, and engineered the collapse of the party.

Prokhorov strenuously denies that he is dependent on the Kremlins but does not set himself up in opposition to it either. He has announced his intention to stay in politics and create a new organization, but it is doubtful that he will managed to rally enough support and win over voters before Dec. 4.

Here's the timeline of Prokhorov’s brief political career based on his posts in social media and followed by comments from RBTH:

“As you probably know, I have made the difficult decision to go into politics. If it turns out well, Right Cause is in for a restructuring.”

The question of who would be the new leader of Right Cause was a talking point throughout spring 2011. Prokhorov was approved as the party leader at the party’s June Congress.

“Rumors are rife in the press about an influx of new people into Right Cause. I will try to comment personally on the issues of party development in order to avoid ambiguity.”

When he joined the Right Cause, Prokhorov began not only to renew the party’s membership but also to change the structure of the party leadership.The leadership structure was changed from three co-chairs to a party chairman with unlimited powers.

“We have given up the old party symbols and the tricolor. With the advent of new people into the party, the ideology is changing in a tangible way.”

The press actively discussed Prokhorov’s drastic proposals: stripping deputies of immunity, Russia’s adoption of the euro, a ban on the formation of the constitutional majority in the Duma.

The press repeatedly referred to Prokhorov as the Kremlin’s man. Some political scientists believed that Right Cause was being groomed as a replacement for Just Russia as the primary opposition party.

“If the party is a runner-up in the elections, we will nominate our candidate for president. I do not rule out my own candidacy.”

Shortly after joining Right Cause, Prokhorov announced that his aim was to make it the second-biggest party in the Russian Duma. Yet, in the early months of his political career, Prokhorov did not announce any presidential ambitions.

“I have read transcripts of stuff from the web and the media about myself and the headquarters and I can say that a coordinated campaign has been launched to discredit Right Cause.”

A massive campaign against the party was launched in the media and the blogosphere. According to Prokhorov, the pressure came from the Kremlin because the party put Yevgeny Roizman, head of the City Without Drugs Fund, on the list of its candidates for the upcoming elections.

“The congress has effectively been hijacked. Some party members have been forming illegitimate working bodies.”

During the September party congress, Right Cause voted to dismiss Mikhail Prokhorov from his post as party chairman. The billionaire declared that the vote was conducted by “planted delegates.”

“I call on everyone to resign from the party and join genuine politics without cheating.”

Mikhail Prokhorov announced he was resigning from Right Cause, noting that the party in its present shape had been “discredited.” He promised to form a separate political movement and urged his supporters to join it.

“I will do everything to get the puppeteer Surkov to resign.”

Prokhorov called Vladislav Surkov, the president’s first deputy chief of staff, the “man who commissioned” the “hijacking” of the party and promised to seek his resignation.