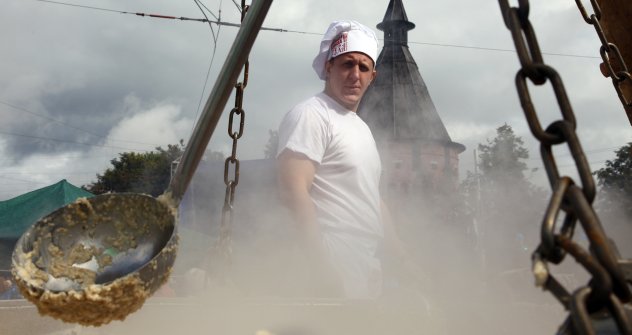 A world record was toppled in Tula, Russia, Sept. 10 where locals cooked a giant bowl of porridge. The Tula porridge, which contained 865 kilos (1,906 lbs) of porridge, exceeded the current record, set last year in Scotland, by 235 kilos (518 lbs).

On Sept. 10, the residents of Tula (located about 125 miles south of Moscow), gathered on a main square around a huge pot hanging off of a 20-foot-high tripod. A sizeable cloud of steam was sitting on top of the pot, and firewood was crackling underneath it. The pot itself was big enough to fit six big men inside. This was the largest bowl of porridge ever cooked waiting for its hour of glory – 865 kilograms (1,906 lbs) of oatmeal, to commemorate the 865th anniversary of the city’s founding. The Tula porridge set a new world record, exceeding the current Guinness record for most porridge cooked, set last year in Scotland, by 235 kilos (518 lbs).

Tula was the southern outpost of the medieval Kingdom of Muscovy and was under constant threat from nomadic tribes. As a result, the city was always undergoing fortification. In 1595, Tsar Feodor I exempted the blacksmiths of Tula from taxes in exchange for an agreement to make weapons for the government; this is considered the beginning of weapons manufacturing in Tula. In the beginning of the 17th century, small-scale weapons production was replaced by industrial production and in 1712, Peter the Great issued a decreee to build Russia’s first weapons manufacturing plant here. Tula continues to be one of the country’s main centers for small arms manufacturing.

As soon as the porridge was cooked, everybody had a chance to taste it. And taste they did. In less than four hours, the pot was empty. But preparing the porridge had taken much longer. The organizers of the event spent months preparing for the record, trying various recipes, looking into the details of record-setting and searching for the right vessel to use as their pot – the one they found measured almost 2 meters (6.5 feet) in diameter and over 70 kilos (154 lbs) in weight.

Nikolai Kostylev, the commercial director of Tula Produkt, a Tula-based company that organized the event and is named the principal record-setter, shared the recipe for Tula porridge: pour 784 liters (207 gallons) of water into the pot; bring to a boil and add 129 kilos (284 lbs) of oatmeal, 2 kilos (4.4 lbs) of salt and 8 kilos (17 lbs) of sugar; bring to a boil again and allow the excess liquid to evaporate.  Have two weightlifters stir the mixture with huge wooden oars.  After the porridge is ready, add jam, honey and butter to taste.

The record has been officially recognized

“Great porridge, very tasty!” said Tatiana, one of the 3,500 people who tasted the porridge. “It’s a pity I can’t taste it with all of the available condiments! I just have butter and kiwi jam.”

Right after this satisfying and filling lunch, the streets of Tula became a venue for the 2nd International Brass Instruments Parade.  Bands from Belarus and all corners of Russia came to entertain the people of Tula.  At the end of the performance, all bands joined forces to play together as one huge 500-instrument-strong orchestra.