"Athleticism is the key in modern basketball" 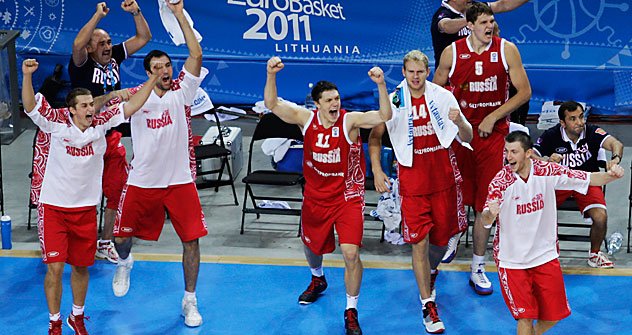 Russia took home the bronze at Eurobasket-2011, but no team went through the tournament undefeated.

Eurobasket-2011 ended with a victory by Spain over France, but the Russian team is bringing home the bronze from Lithuania. Modestas Paulauskas, a basketball hero and the captain of the Soviet team that won gold at the Munich Olympics in 1972, spoke about the recent European competition with Gazeta.ru.

“I made my debut in the European championship in Moscow in 1965. After that, I either played in these tournaments myself or watched them closely. I have to admit that basketball is not standing still. It is fashionable to say that it has become faster. Well, that is true up to a point. Depending on the tournament situation and the opposing team, some teams play faster and some slower.

Born March 19, 1945 in Kretinga
Merited Master of Sport of the Soviet Union
Played for Žalgiris Kaunas (1963-1976)
1972 Olympic champion
Bronze medalist at the 1968 Olympics
1968 and 1974 world champion
Bronze medalist at the 1970 world championship
Four-time European champion (1965, 1967, 1969, 1971)
Bronze medalist at Eurobasket-1973
Captained the Soviet Union national. team from 1969 to 1974
Coached the Soviet junior team and Zalgiris Kaunas
Currently works as a coach at the sports school in Šakiai, Lithuania and trains schoolchildren in Krasnoznamensk (Kaliningrad Region) twice a week

“Athleticism is what counts more and more in modern basketball.

“If you look at the new generation of basketball players and compare them to my own generation, you have to admit that the players today are head and shoulders above us. This year’s Eurobasket brought nothing new in tactical terms. In 1982, I was the head coach of the Soviet junior team in which Arvidas Sabonis made his debut. At the time, we demonstrated the elementary ‘double’ and the British coach called it a new word in basketball. One of my assistants corrected him, ‘It’s a totally forgotten old trick.’ At Eurobasket-2011, many teams demonstrated forgotten old tricks.

“Individual skills have, indeed though, improved. Dribbling and blocking are done at very high speed. Trifles that can decide the outcome of a match get more attention now. The Gasol brothers or Dirk Nowitzki did not seem to do anything special, just jostling with their minders under the backboard. But, at the right moment, they tricked their opponents and scored vital points. Naturally the new generation should play better than the previous one.

“I was rooting for the Russian team. In Lithuania, they say I am more Russian than Lithuanian. I liked the kind of basketball the Russian team, under its coach David Blatt, demonstrated during Eurobasket, especially in the defense.

“I think the Russian team did not rise above third place because it did not peak at the right time. Soviet national coach Alexander Gomelsky used to say: “You should not start a tournament in peak form.” Of course, in those times, we could afford it. The Soviet team could reach the semis on sheer class, without demonstrating even a tiny part of what it was capable of in the preliminary stages. That is not the case today.

“During this championship, not a single team emerged undefeated. Spain lost to Turkey and the French lost twice to the champions. The silver medalists were noted for their physique.

“In the Russian team, Andrei Kirilenko, of course, stands out. He is a player in a different class from his partners. Many have criticized Timofei Mozgov, but he has definitely made progress. His playing with the NBA was good for him. I think defense is the weak link in the Russian team.

On the whole, the bronze is a success for the Russian team.

This is an abridged version of the original interview, published in Russian at http://www.gazeta.ru/sport/2011/09/a_3773061.shtml