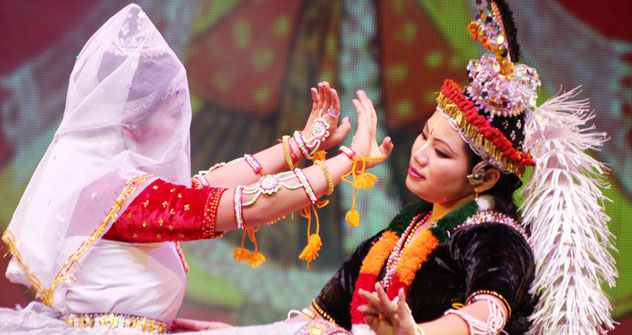 The festival of Indian Culture in Russia started with the Bollywood dance musical 'Love Story' in Moscow on September 17. The fest is being jointly organised by the Indian Council for Cultural Relations and the Ministry of Culture of Russia across three Russian cities - Moscow, St. Petersburg and Kazan. It will last till September 30.

During the inauguration ceremony Indian Ambassador to Russia Ajai Malhotra and Director of the Russia's department for promoting folk culture Alexei Shalashov said that the India Fest will become an annual feature in bilateral ties.

'Love Story' directed by Sanjoy Roy and choreographed by Gilles Chuyen will also be staged in Russia's second largest city of St Petersburg and Tatarstan capital Kazan on Volga. The other visiting troupe from India, that will perform Gujarati folk dance and music show, is called the Halar Lok Kala Kendra group.

The festival of Indian Culture in Russia will also include a painting exhibition titled 'Walking beyond Three Seas', showcasing works of art by renowned Russian artists, on themes related to India.

Under the aegis of these celebrations, the Jawaharlal Nehru Cultural Centre, Embassy of India, Moscow is organising an exhibition showcasing original literary works by Tagore, translated in many languages and digital reproductions of Tagore's paintings.