Knocked off the Right Cause 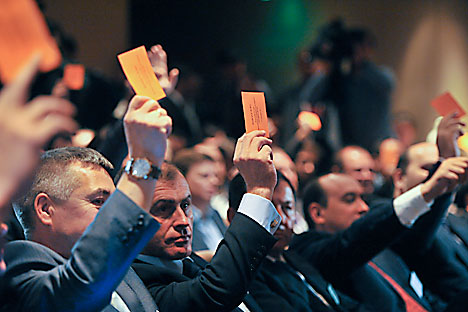 Voting at the alternative congress of the Right Cause party held at the World Trade Centre in Moscow. Source: ITAR-TASS

Without Right Cause as the opposition in the Duma, Russia's liberals are destined to spend another five years without representation.

There is almost nothing money can’t buy in today’s Russia.  The abundance of material goods – ordinary and luxurious, domestic and imported – is a given.  And if there is a need to indulge something other than the material side, people of means can always buy their way into politics.  The wealthiest can even purchase a political party and play the exciting game of “Duma elections.”  What money can’t buy, however, is the ability to establish the rules by which the game of Russian politics is played. This function rests exclusively with the Kremlin.

Billionaire Mikhail Prokhorov learned this lesson the hard way.  Last week, the congress of the Right Cause party, which Prokhorov has led for the past three months, rebelled and stripped him of his leadership position. Faced with the mutiny, Prokhorov chose not to fight; instead, he quit the party and promised to his supporters to start a new one.  In a completely unprecedented move, Prokhorov publicly accused the deputy chief of staff of the presidential administration, Vladislav Surkov, of inspiring and orchestrating the intraparty putsch.  Prokhorov called Surkov “the puppet master” of Russian politics and vowed to force his resignation.

The Kremlin’s selection of Prokhorov to lead the moribund Right Cause party in May was driven by a desire to have a “liberal” party in the next Duma, which will be formed after the elections scheduled for on Dec. 4. Prokhorov’s candidacy as party leader looked attractive for two reasons: First, he had a raw charisma and undeniable media appeal.  Second, and more importantly, being one of Russia’s wealthiest men, Prokhorov was willing to assume the burden of the election campaign expenses, thus allowing the Kremlin to pursue its liberal-party-in-the-Duma project essentially for free.  Naturally, certain agreements were made between the two parties.  The Kremlin, having promised Prokhorov a Duma seat at least for himself, wanted him to behave.  For his part, Prokhorov, having promised not to explicitly criticize the tandem and the United Russia party, was apparently left with the impression that his wealth gave him more wiggle room than allowed any other Russian politician.

Looking back, it’s now obvious that both sides miscalculated.  The Kremlin didn’t anticipate how many mistakes the bold, energetic, but completely unschooled-in-political-games Prokhorov could make in a short time. Right Cause’s election platform, released in haste, was a joke; his claim at becoming the next prime minister of Russia (a position that, incidentally, is not vacant at the moment) went overboard; and his dictatorial leadership style – blatantly unfitting the supposedly “liberal” party he was trying to build – rapidly alienated the top party brass and the regional leaders, thus creating the fertile ground for the September coup d’état.  For his part, Prokhorov’s biggest mistake was his inability to imagine just how little real decision-making power he would enjoy as the leader of a political party, especially when compared to his prior life as a big corporate boss.

The formal reason for the clash between Prokhorov and Surkov was Prokhorov’s intent to include Yevgeny Roizman, the leader of “The City without Drugs” fund, on Right Cause’s candidate list for the upcoming Duma election.  Following the presidential administration’s established policy to keep people with the criminal past from the Duma, Surkov demanded the removal of Roizman, a man with a prior criminal conviction.  “Either him or you,” he reportedly told Prokhorov.  Prokhorov refused, arguing that he couldn’t break his public promise to Roizman.  That sealed Prokhorov’s fate.

It’s hard to believe, though, that the “Roizman problem” couldn’t have been solved differently.  For example, Surkov could have simply pressed the delegates of the party congress to vote down Roizman’s candidacy, something that even Prokhorov would have been unable to overrule.  Surkov’s unwillingness to look for a compromise reflected the widely held opinion that President Dmitry Medvedev, initially very supportive of Prokhorov, had become disillusioned with him.  Medvedev’s decision to terminate the “Prokhorov project” might have been part of a deal he struck with the leadership of United Russia, a deal that may pave way to his second presidential term.

It’s hard to feel sorry for Prokhorov: He has enough pricey toys to keep him busy for the rest of his life.  Yet, it’s deeply troubling that Russian voters holding liberal views will be unable – again – to have a representation in the Duma.

A few years ago, Speaker of the Duma Boris Gryzlov famously gaffed that the parliament was not “a place for discussion.”  It still isn’t, given that the concentration of political power in the hands of the executive branch has reached extreme levels.  The question that the “Prokhorov affair” brings to focus is: Does Russia have any public place at all in which to discuss, in a constructive and civilized way, the problems facing the country?

And then there is another: If even money can’t buy you a way into politics, then what can?