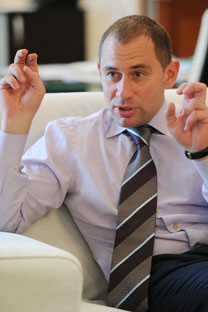 The decision about whether to sell Bashneft shares to India's Oil and Natural Gas Company will be made before the end of the year, according to the head of the Joint-Stock Financial Corporation Sistema.

According to Mikhail Shamolin, President of Joint-Stock Financial Corporation Sistema, a decision about the possible sale of Bashneft shares to India's Oil and Natural Gas Corporation (ONGC) will be made before the end of 2011.

“We plan to resolve the matter in one way or another before the end of the year”, he noted. Shamolin said that the Indian company was currently appraising Bashneft’s assets, after which a price would be negotiated.

He also added that the deal with ONGC and the possibility of combining Bashneft and Russneft were not connected.

Shamolin stated that the priority for Sistema was to increase the value of its investments and, in the case of Russneft, this can be done by reducing the company's debt.

“If we see that a merger might increase the price ... an appropriate decision will be made”, he said.

He also added that Sistema was not conducting negotiations with the oil trader Glencore about a partnership. “We are always happy to develop projects with good partners but negotiations are not currently under way”, he said.

In December 2010, Sistema and ONGC signed a master agreement under which the possibility was to be explored of package deals involving Sistema’s shares in Bashneft and Russneft and ONGC’s shares in Imperial Energy.

Sistema owns 76.5% of the shares in Bashneft and 49% of those in Russneft, both of which are among the ten biggest oil companies in Russia. Imperial Energy, which is developing oilfields in the Tomsk Region, is a wholly-owned subsidiary of ONGC.