Russian exhibitions in London: From sex workshops to Soviet architecture 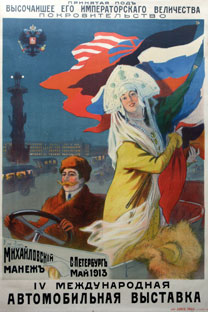 A wide range of Russian art in London this fall provides plenty of options for everyone.

There always seems to be lots of Russian art in London these days, from 19th century masterpieces selling for millions in the top auction houses to funky, pop-up studios in the riot-riddled suburbs. This fall is no exception. Several exhibitions in September and October display diverse aspects of Russian culture, with a brand new gallery opening in Mayfair and a major exhibition coming up at the Royal Academy.

Memoirs from a Cold Utopia

To commemorate the 20th anniversary of the official end of the Cold War, the London Print Studio has assembled a selection of films and photographs, images and installations entitled “Memoirs from a Cold Utopia” (until Nov. 18).  Eve Kask has curated an eclectic exploration of the meeting point between art and politics in contemporary Russia and Eastern Europe, featuring prints of Lego gulags and monuments wrapped in red scarves.

The first image to greet visitors to the studio is a piece by the radical Blue Noses Group, who describe themselves as “playful, idiosyncratic, provincial buffoons.”  Above the caption “NATO, WELCOME,” three parodically dressed Russian peasants in embroidered, Tolstoy-style smocks with (obviously fake) black beards stand in a bleak Russian field. The central figure proffers the traditional welcome of bread and salt, while the two men behind him are waving axes.

Characteristically comic and provocative, the piece sets the tone for an engaging and ambivalent series of reflections on post-Soviet history.  Andrei Krauze’s beautiful 1992 cartoon, showing a flock of birds flying out of one cage and straight into another, succinctly and prophetically summarizes the feelings of many of the artists represented.

Alina Rudnitskaya’s multi-award-winning video “Kak stat stervoi” (translated here as “Bitch Academy”) reflects a mesmerizingly disturbing aspect of contemporary Russia. The women in the film are attending a St. Petersburg workshop on how to “seduce, marry and control” wealthy men. The piece is free of commentary, but rich in feminist perspectives of gender as a deliberate construct.  One woman cries as she is abused and humiliated; others watch and learn.

Peter and the Wolf

There’s no mistaking the aspirations of the brand new Erarta Gallery on Berkeley Street in Mayfair. Directly opposite the soon-to-open Novikov restaurant, the champagne-and-sushi launch party was a sparkling affair. Erarta’s original gallery, the largest non-governmental contemporary art museum in Russia, opened in St. Petersburg in 2008, so it is appropriate that the London gallery’s inaugural exhibition, Peter and the Wolf (until Oct. 8), showcases the work of two generations of artists from that city.

The young curator, art critic Gabriel Coxhead, is enthusiastic about bringing more Russian art to London: “What is so interesting is to introduce a whole other context,” he said. “Some of these works, [referring particularly to the encrusted abstracts of Vyacheslav Mikhailov] are like contemporary icons.” Coxhead is also curating Erarta’s next exhibition, of works by “edgy” surrealist Rinat Voligamsi (from mid-October).  The best known artist currently on display is Vladimir Ovchinnikov whose colorful fantasies, after recent auction successes, have been optimistically priced around £30,000.

Among the younger generation of artists, many viewers are drawn to the inscrutable landscapes of Alexander Davchevsky, sandwiched between the bold symbols and the intense, nostalgic still lives of two female contemporaries. Davchevsky is “a painter’s painter; he knows his materials,” said Beth Morrow, Erarta’s Sales Manager, an artist by training. “He teeters on the edges between abstract and representational.”

Pushkin House in Bloomsbury continues to provide a host of exciting, Russian cultural events for Russophilic London. Their latest exhibition, open to the public until Oct. 7, is a photographic journal of the staging of three short stories by prisoners in Perm.

A more surprising venue for a display of Russian cultural artefacts is the thrice-yearly Antiques Fair in Battersea. Kirill Kalinin of Antikbar has an incredible collection of elegant Soviet posters; part of the display for the fair (until Oct. 2) is a huge, recently restored poster for a 1913 international car festival in Russia.

Soviet architecture will soon be on show in London’s Royal Academy of Art. A major exhibition is due to open there at the end of October, called “Building the Revolution” and focusing on the architectural forms and forces of early 20th century Russia. There will be sculptures in the courtyard, as well as photographs and plans of constructivist buildings, many of which have never been exhibited before in the UK. If you can’t wait until then, the “Energy and Process” galleries on the fifth floor of Tate Modern begin with Kasimir Malevich’s 1916 “Dynamic  Suprematism.”

In 1959, the Tate acquired a canvas by Russian-born American artist, Mark Rothko, which currently pulsates from an upstairs wall of Whitechapel Gallery. The exhibition “Rothko in Britain” (until February 2012) surrounds the painting with archival photographs, letters and recordings from Rothko’s first solo show in the UK in 1961. As observers stare at “Light Red over Black,” you can feel the truth of Rothko’s words: “A picture lives by companionship, expanding and quickening in the eyes of the sensitive observer.”