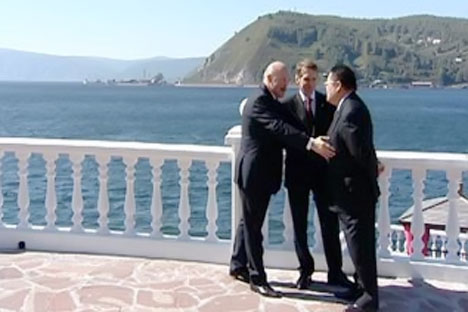 Irkutsk played host to a meeting of the SCO Business Council.

In addition to disagreements between Moscow and Beijing, the heightened tensions between Central Asian SCO members are hampering implementation of multilateral SCO projects.

In mid-September, Irkutsk played host to a meeting of the SCO Business Council. In past years, the Council had come up with plenty of integration projects but most of them remained on paper. The key reason is a divide on the financing vehicle for the projects. Russia has been pushing for a special SCO account, while China has been lobbying for a joint SCO bank.


The annual meeting of the SCO Business Council was this time held in the organisation’s jubilee year (in June, the SCO, which brings together Russia, China, Kazakhstan, Kyrgyzstan, Tajikistan and Uzbekistan, turned ten), hence the event was largely a wrap-up meeting. It is a jubilee year even for the Council itself, it having been established five years ago. In his opening speech, head of the Presidential Executive Office of Russia Sergei Naryshkin briefly outlined all the ideas the Council had proposed over the previous five years, including establishment of a venture fund, a common rating agency, an energy club, and an SCO university. The Council’s head, Governor of the Irkutsk Region Dmitry Mezentsev, who took the floor after him, was more specific. He explained that the idea of creating a rating agency was first born at the height of the crisis in 2009, after SCO members realised the unreliability of the three big US rating agencies: Fitch, Standard and Poor’s and Moody’s. By the same token, a venture fund was designed to encourage innovation and ensure the technological leadership of SCO members, while the purpose of an SCO university was to bring the six countries to the top in global education.

Mr Mezentsev admitted, however, that all those ideas were still on paper. “Unfortunately, there is a certain gap between the expectations placed in the Business Council, and our actual situation”, he explained. As such, it seems impossible so far to create a rating agency as reputable as its US rivals. To top it all, only three countries are prepared to contribute to the venture fund: China, Russia and Kazakhstan. Mezentsev sees the lack of financing for the Business Council’s projects as the main reason behind this.

“We have been discussing the idea of creating a support fund for SCO projects for a long time”, Dmitry Mezentsev went on. Participants in the meeting agreed that the key problem was still the lack of agreement on what the fund should look like. Russia proposes creating a special SCO account from which funds could be allocated to conduct feasibility studies for joint projects. China insists that a special bank be set up for the purpose. Moscow, in turn, is prepared to support the idea, provided that the bank is based on the Eurasian Development Bank (with the biggest stake controlled by Russia and the second biggest by Kazakhstan). Beijing, however, insists on a totally new structure. The issue was brought up again at the jubilee SCO summit in Astana but no solution was reached.

“It is a mixture of China’s desire to lead the SCO and personal motives”, a source said. “Governor of the China Development Bank Chen Yuan, aged 66, is soon to retire. Yet he is still full of life and energy and is a son of a prominent party leader, Chen Yun. The Chinese have come up with the idea in order to create a pre-retirement post for him and they won’t budge now”. The problem will also be in focus at the November summit of SCO prime ministers in Moscow but Kommersant sources within a few delegations are not expecting any breakthrough.

In this situation, many projects in SCO member states are carried out on a bilateral basis, with China taking the lead. For one, the Uzbekistan delegation was proud to present a project for a China-Uzbekistan trading house, which would grant the Uzbek business community access to Chinese technology, in addition to an opportunity to seek Chinese business partners.

Meanwhile, the extremely strained relations between Central Asian SCO members, apart from the rift between Moscow and Beijing, are also hindering multilateral projects. Head of the Tajikistan delegation Sharif Said closed his speech with a complaint about “instances of SCO member states closing mutual borders, raising import duties on lubricants and prejudicing the rights and status of labour migrants”. Russia and Uzbekistan, however, made no comment on this.