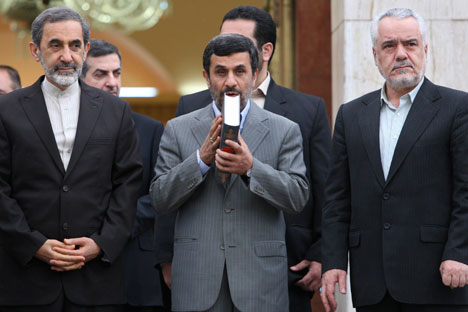 Iranian President Mahmoud Ahmadinejad kisses the Quran during a departure ceremony for him before leaving for Turkey to attend an international conference in May 2011. Source AP

The Iranian diplomacy is bound to seek a matrix of strategic understanding with Turkey that is broad-based, going beyond their common Kurdish problem.

A template of the geopolitics of the Middle East that remained shrouded in mystery in the recent weeks and months related to Turkey’s ties with Iran. Both are key countries in the region and aspiring regional powers. Broadly speaking, both countries have been ardent supporters of reform and change in the Arab world. They cheered the Arab Spring as it appeared over Tunisia, Egypt and Libya despite its different manifestations. That was how things stood until matters came to Syria…

However, with the huge input by Saudi Arabia into the Syrian cauldron in the nature of the Sunni-Shi’ite rivalry, Turkish and Iranian positions began diverging. Turkey of course has diverse interests in Syria, while on the contrary, Iran is singularly fortunate to concentrate on just one overwhelming interest only that subsumes all else, namely, the strategic significance of the Tehran-Damascus alliance for Iran’s regional standing, which must, therefore, be preserved at any rate. Turkey is susceptible to Saudi influence whereas Tehran finds itself at odds with Riyadh in the recent period.

The western commentators no doubt fuelled the divergence in the Turkish and Iranian approaches toward Syria and often magnified it out of proportions as part of their sustained attempt to isolate Iran. Thus, Turkey’s recent decision to allow the deployment of the North Atlantic Treaty Organization’s [NATO] missile defence shield [ABM] on its soil in the central Anatolian town of Malatya was readily interpreted as an unfriendly move against Iran. So indeed was the Turkish suggestion to the United States to reposition its Predator surveillance aircraft presently in Iraq on Turkish soil.

Whereas, Turkey’s decision on the ABM was nothing very dramatic and was on expected lines which was reached after protracted negotiations and was primarily driven by security considerations. There is no way Turkey would want to be left out of the NATO radar cover against missile threats that could augment its security. Why should Turkey deny itself any sophisticated NATO facility? On the other hand, Turkeyhas strong and specific interest in sharing the intelligence that the Predator could steadily supply from the Kurdish regions of northern Iraq.

Tehran’s matter-of-fact response to the Turkish moves, therefore, should not have come as surprise. Tehran has been shrewd enough to appreciate Turkey’s range of compulsions, especially under a government that is Islamic in its orientation. Indeed, what comes as a real surprise over the weekend is that not only are Turkish-Iranian relations largely on track, but the two countries may be actually on the brink of reinforcing their strategic understanding.

Three high-level political exchanges between the two countries are in the pipeline in immediate terms. The influential speaker of the Iranian Majlis, Ali Larijani is visiting Turkey this week. The speaker of the Turkish parliament Cemil Cicek has been invited to the International Conference on the Intifada to be held in Tehran on October 1.

The Turkish Prime Minister Recep Erdogan and Iranian President Mahmoud Ahmedinejad are scheduled to meet in New York next week on the sidelines of the United Nations General Assembly session. Besides, Erdogan announced on Thursday his own intention to visit Tehran at a suitable date.

Erdogan added that “Turkey is in talks with Iran on regional developments, Syrian issue and campaign against terrorism.” He then dropped a bombshell that Turkey and Iran may launch coordinated military operations in the Kandil Mountains on the Iraq-Iran border (approximately 100 kilometres from the Turkish border) against the Kurdish insurgents.

Unsurprisingly, Tehran is absolutely delighted. Iran’s ambassador to Turkey Bahman Hosseinpour promptly reacted: “The PKK and PJAK, which are linked to each other, are harming Turkey and Iran. The two brotherly nations can conduct organized action against them. … But organized activity does not mean we will carry out a joint operation in northern Iraq.”

Erdogan also revealed that he has deputed the Turkish intelligence chief Hakan Fidan to visit Tehran for consultations with the Iranian intelligence. Curiously, Israeli commentators have repeatedly alleged that Fidan is “pro-Iranian” and his appointment as Turkish intelligence chief by Erdogan contributed to the deterioration of Israel-Turkey security cooperation in the recent period.
At any rate, what emerges is that the Turkish and Iranian intelligence agencies are increasingly convinced that Israel and some of its regional partners may have opened a line to the Kurdish insurgents as pressure tactic against Turkey and Iran. There have been reports that Israeli advisors have visited the Kurdish insurgent groups.

The heart of the matter is that Turkey and Iran have a strong convergence of interests in curbing Kurdish insurgency that plagues both countries. Their differences over the Syrian situation pale into insignificance in comparison with this commonality of interests. If anything, Turkey’s current rift with Israel adds piquancy to the Turkish-Iranian convergence.

Israelis fast building up ties with Turkey’s traditional adversaries in the region – Greece, Cyprus and Armenia.The Israeli Prime Minister Benjamin Netanyahu even tapped into the anti-Turkish antipathies dating back to the Ottoman era in the Balkan region. In short, Israelhopes to encircle Turkey with a cordon of unfriendly countries in its own neighbouring regions in retaliation for Erdogan’s unhelpful policies.

To be sure, Israel cannot be acting in this brazen manner against Turkey, which is an important NATO power, without some sort of nod from Washington. Indeed, American commentaries on Turkey have increasingly been acquiring an acerbic tone. A commentary featured by the government-funded Radio Free Europe/Radio Liberty last week said Edogan criticised him for “issuing thuggish pronouncements” regarding Israel and “menacingly eyeing” Israel and Cyprus’s hydrocarbon reserves in the Eastern Mediterranean, aspiring to become the “chief maritime bully” in the region by constantly indulging in “Anatolian chest-poundings”.

It lampooned Erdogan, saying he “will make the prison guard in "Midnight Express" look like Florence Nightingale.”The commentary let in the readers into a “dirty little secret”, namely, Greece’s emergence as Israel’s “favourite regional military partner”. Michael Weiss, communications director of The Henry Jackson Society, a foreign policy think tank based in London, underscored that the Greek-Israeli axis also would have an anti-Iranian orientation.

Clearly, there is no need to second guess the angry mood in Ankara or Erdogan’s motivations to reach out to Tehran. All the same, Washingtonis livid that the Turkish-Iranian strategic ties are strengthening. Nit-picking has begun. The Voice of America commented, “Turkey and its U.S. and European allies could be on a collision course over Iran. Despite international efforts to isolate Iran over its disputed nuclear program, Turkey has deepened trade and financial relations with Tehran…in the face of Washington's calls on Ankara to stop cooperation.” The VOA held out a threat that Washington might step up pressure on Ankara to roll back its dealings with Iran.

The US intelligence would know that Turkish-Iranian security cooperation is already fairly advanced. The indications are that during the period since July 16 when Iran first launched the on-going military operations against the Kurdish militants, Turkish security agencies and military have been coordinating with these operations. The unkindest cut of all could be that Turkey might even have been feeding Iran with intelligence inputs gathered by the Israel-made Heron surveillance drones hovering above the Kandil Mountains.

Some reports mentioned that Turkish counter-insurgency experts might have been functioning out of a joint operational headquarters in Urmiyeh in north-west Iran. The rumours that the leader of the Turkish Kurds Murat Karayilan has been captured by the Iranian Pasdaran during the operations in northern Iraq also refuse to go away. To be sure, Turkish intelligence would love to get access to Karayilan. In sum, as Turkish military’s preparations reach the final stages for mounting a full-fledged ground offensive in northern Iraq, which is expected in a very near future, the strategic understanding and coordination at the operational level with Iran will become crucial for Turkey.

This cannot but have significant fallouts for the geopolitics of the Middle East. The Iranian diplomacy is bound to seek a matrix of strategic understanding with Turkey that is broad-based, going beyond their common Kurdish problem. A ‘stand-alone’ cooperation at the operational level with Turkey on the Kandil Mountains may not satisfy Tehran.

This article was first published on www.strategic-culture.org