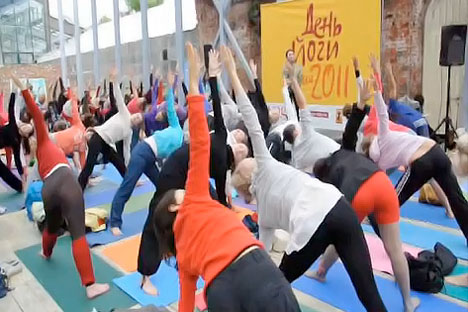 The second All-Russia Yoga Day took place across all the big cities in Russia.

Throughout the world Yoga Days have been a regular occurrence for a long time. This September the event happened in Russia for just the second time, but this was already with some considerable fanfare. The people who went to the park to practice where not just Muscovites, who tend to be the first to latch on to the latest trends, but also other people from the other cities in Russia.

The All-Russia Yoga Day was organised by Yoga Journal and Hanuman.ru as a non-commercial project geared towards popularising yoga in Russia. People practicing all kinds of different varieties of yoga had an excellent opportunity to get to know new styles, chat with instructors and teachers and go to lessons in various yoga studios throughout Russia, which were all free to attend on this day.

In Moscow, the Pharmaceutical Garden on Prospect Mira was chosen as the venue for the yoga event. In Sochi, Yoga Day was marked with the First City Festival of Yoga. This festival was organised by the Department of Physical Education and Sport, the Sochi School of Yoga, and the Riviera Municipal Park of Culture and Recreation. And other cities in Russia also pulled out all the stops to mark this event.

A year ago the Hanuman.ru website developed a very good tool of finding yoga classes. The search mechanism makes it easy to find a yoga class near home or work. Unfortunately this service is still only available in Russian, but it does cover more than 100 cities and towns in Russia.

A list of the top 5 yoga centres according to RT.COM:

Federation of Yoga
Federation of Yoga is widely-known even among Muscovites who have never given a thought to spiritual perfection. The chain has 6 centers offering various styles, from classic “hatha” and “kundalini” yoga to less mainstream types. Prices start at 400 rubles per lesson.
The center is also known for various events aimed at making yoga more popular. This summer their coaches have been holding free classes at Park Kultury Metro station every Sunday morning.

Narayana
The Narayana center offers another option for fans of outdoor sports. It is located in the Red October complex and holds open-air classes on the terrace of Strelka Bar twice a week during summer months.
But as autumn settles in, you might be looking for a warmer place to practise. So here is another option.

Ananda
You can find this cozy studio on Ostozhenka Street. This is one of the few places in Moscow where yoga is taught by instructors from India.
The experienced yoga masters here practice a yoga style that incorporates elements of several classic approaches with emphasis on breathing and stretching. Their classes are held in English and last 60 minutes.

Bikram
If you want your yoga experience to be even more authentic, visit Moscow’s only “Bikram” yoga studio near Kitay Gorod Metro station. Their clients can expect a very warm welcome… literally!
“Bikram” – yoga was invented in the ‘70s in the US and has gained quite a following there. It consists of a sequence of postures practiced in a room heated to 40 degrees. The idea is to stretch warmed up muscles and drive toxins out with sweat.
The studio’s owner received his certificate from the top guru himself and now invites other Bikram coaches from the US on a regular basis.

Prana
“Prana” yoga is where you can try almost all existing yoga styles under one roof, from “Aiengara” to “Himalayan”. The spacious center near Barrikadnaya Metro includes five exercise halls, a vegetarian bar and even a painting-studio.
They offer an introductory course for various yoga styles where you can learn the terminology, meditation and breathing techniques.