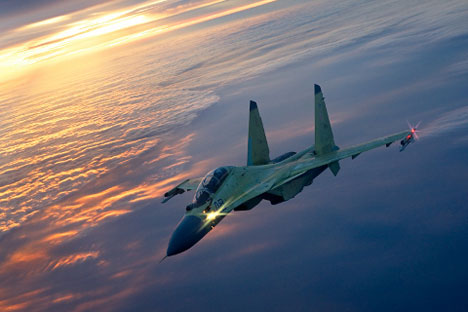 Eighteen Su-30K fighter jets which were delivered by Russia to India in the 1990s could end up in service with the Belarusian air force, respected Russian business daily Kommersant said.

Russia and India agreed on the sale of advanced Su-30MKI fighters to the Indian air force in mid-1990s, but Moscow had not been able to deliver the aircraft until early 2000. The sides found a compromise - the first 18 fighter jets were delivered in downgraded version, Su-30K, on condition that they would be returned to Russia after being replaced with Su-30MKI.

According to Kommersant, the aircraft were formally returned to Russia's Irkut aircraft corporation, but never touched the Russian soil and ended up in Belarus.

The first 10 jets have been recently delivered to an aircraft plant in Baranovichi for a deep overhaul to the Su-30KN version, Kommersant cited a source close to Russian state arms exporter Rosoboronexport. The remaining eight are expected to arrive in November.

The source said Belarus was interested in buying the Su-30K because the country cannot afford new aircraft and the deal could be very cheap.

According to Russian experts, the current price for an outdated Su-30K after depreciation is about $10 million. An overhaul would require an additional $5 mln per plane.

"To buy a heavy fighter for $15 mln is a real bargain," Kommersant quoted Ruslan Pukhov, the head of the Russian Center for Analysis of Strategies and Technologies, as saying.

Despite the certain loss from such a deal, Irkut may be forced to sell the Su-30Ks to Belarus because the Russian Defense Ministry will not spend the money on old aircraft, and other potential buyers - Syria and Sudan - are out of the picture for political reasons.