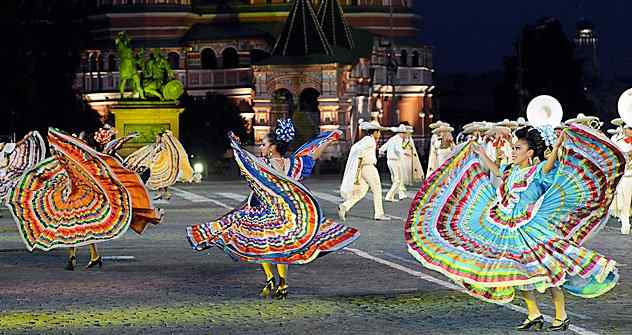 After a summer of street festivals and exhibitions, the residents of the Russian capital aren’t quite ready to be shut up inside. See what the next few months have to offer.

This summer, theater, music, art and festivals of every kind took over the streets, estates and art clusters of Moscow. And, as fall approaches, Muscovites seemed unwilling to give up the festive atmosphere. Rather than slowing down as the weather turns cooler, the city’s cultural life instead is gathering new momentum.

A visit to ancient Rus’

A big man with long hair and a beard, wearing a shirt belted with braided linen, knitted gaiters, and soft leather boots, pushed a Maclaren stroller through the Kolomenskoye Museum Preserve along the Moscow River. Next to him walked a barefoot woman wearing a long dress and apron. The 27-year-old computer programmer from St. Petersburg, his wife and toddler son came to Moscow to spend three nights at the Rusichi camp, located on the grounds of the Kolomenskoye estate, which had been turned into a medieval village.

From Sept. 2-4, a festival entitled “Times and eras: Ancient Rus through Your Own Eyes” hosted 84 historical re-enactment clubs from Russia and abroad. Kolomenskoye became the temporary residence of Finno-Ugric people, Vikings, steppe dwellers and Rusichs – tribes who once lived in the European part of today’s Russia. There were no modern tents, rugs or plastic crockery. The participants lived in linen tents, wrapped themselves in patchwork quilts, cooked on open fires and ate and drank out of authentic clay and wood plates.

In accordance with the customs of the time, the opening ceremony featured hundreds of armed men dressed in fashions dating from the ninth through the 11th centuries taking part traditional Russian “wall-on-wall” fist fight. The fight lasted just several minutes, and afterwards, those who “survived” the battle were able to take part in lively chivalrous activities—for example, a horseback game called “Grab a hat.”

“I knew that our old-fashioned tents were not going to provide us with adequate protection against the elements – after it rained it became damp and cold inside. But we still didn’t take umbrellas or polythene with us, because these modern comforts would have ruined the feeling of magic,” said Sergei, one of a number of craftsmen participating in the festival.

The organizers wanted to include the more than 50,000 spectators as much as possible in the scene. Some of the visitors only went as far as to stroke the horns of black steppe deer, to taste traditional kasha in the tavern and to take photos of the Viking boats that sailed in from the harbor, but others went whole hog—taking harp lessons, stoking the fire in a workshop, sewing leather objects and sculpting from clay. There were also lectures about the history of the clothing participants wore, and folk dancing and music.

Sergei Shpilko, chairman of Moscow’s tourism committee, believes the festival has a bright future. “In time, [the festival could] become no less prestigious than, for example, the Venice Festival or the Brazilian Carnival,” he said. And it’s possible that the one of the small boys gallantly waving little wooden swords in the children’s playground at the festival, will eventually join the ranks of the medieval army and will return a few years later wearing armor and homemade leather boots, pushing a stroller towards his linen tent.

“These guys in costume do look slightly mad”, said festival-goer Roman. “But they are so happy that it makes you want to jump in and take part in a fist fight or try to cast a horseshoe in the forge”.

It’s one hour before midnight, and right in front of the Kremlin, the wind orchestra of the National Association of Bersaglieri [marksmen] from the Italian town of Lecco are surrounded by a dense circle of spectators. The men wear hats decorated with huge bouquets of black feathers, throw up their instruments and, to the crowd’s delight, play another few songs. The evening program of the Spasskaya Tower International Military Music Festival finished half an hour ago, but no one was ready to go home. At either end of Red Square, the sounds of bagpipes, trombones, drums and applause were still audible.

The five-day-long festival included all kinds of military, folk and pop music, weapons demonstrations and ceremonial parades, a laser show, bikers and pyrotechnics. Cannons were fired from the Spasskaya tower, giving the event a special sense of ceremony. Not one minute of the two-and-a-half-hour evening performances seemed to drag. The Cavalry Honor Escort of the President’s Regiment, the Russian Horn Orchestra, the Presidential Orchestra and the Honor Guard of the Presidential Regiment all added to the caliber of this event, but this was just the beginning. The Jaguares de la Tamayo marching band and the Tenochtitlan Folk Dancing Company from Mexico infected everyone with their Southern optimism, and the National Presidential Orchestra of Ukraine surprised the audience with their jazz numbers.  The She-Hue cultural ensemble from Sinai (China) pulled on the audience’s heartstrings with their rendition of Moscow Nights; His Majesty’s Royal Band and ceremonial platoon (Norway) performed Farewell of Slavianka in Russian; a bagpipe virtuoso from the 19th Regiment of the British Royal Artillery met with huge applause, and a secret corps of drummers from Switzerland shocked the genteel Moscow audience when they bought out flaming juggling batons.

“You can see that the musicians themselves are enjoying all this. They do things that aren’t scheduled in the program, sometimes they just improvise, So there’s lightening, thunder, its pouring with rain, and then on top of this the chimes begin to strike, and the guys are drumming, reorganise themselves, jump around – and are still smiling happily. The people in the stands were right in chanting words of praise when they had finished,” said Anna, who came to the show with her eight-year-old son Fyodor and her parents.

Over 500 musicians from 15 countries participated in this year’s 4th annual Spasskaya Tower Festival and staged a show-stopping extravaganza by the Kremlin’s walls.

www.festival.circus.ru
World-famous legends of the circus ring and all the talented newcomers to the circus scene will gather in Moscow and show off their best acts at the Luzhniki Olympic Complex. Passions are running high – the program is traditionally competitive and winners are awarded with gold, silver and bronze medals.

The slogan for this year’s festival is “Rewriting Worlds.” Sixty-four artists and 16 artistic groups from 33 countries are scheduled to participate. According to the commissioner of the biennale, Josef Bakstein, the projects will “showcase the various ways of using media in the contemporary art process, and also art which aims to criticize the role of technology and media in modern civilization.”

This is an exhibition and sale of works made using traditional Russian rural skills and arts, and includes creations of both independent craftsmen, as well as businesses from Moscow and Russia’s regions. The biennale traditionally takes place in the ancient Russian surroundings of the colorful Izmailovsky Kremlin.

For three days the traditionally gray Moscow fall will be lit up in bright colors, and the center of Moscow will turn into one big art installation. The director of the famous Fete des Lumieres in Lyon, who was also creative force behind the opening and closing ceremonies of the Beijing Olympics has been invited to set up the first international festival of light in Moscow. The organizers are promising that the light and music installations will also have a traditional Russian color scheme. The magnificent light show will be completely free to view and will be projected around many sights right in the city center, including Red Square, the Bolshoi Theatre, the Historical Museum, and on Lubyanka and Manege Squares.

More than 450 animated films from 22 countries, including the UK, the United States, Japan and France will be screened at 12 locations in Moscow as part of the international animation festival. The program will also include lectures, master classes and exhibitions.