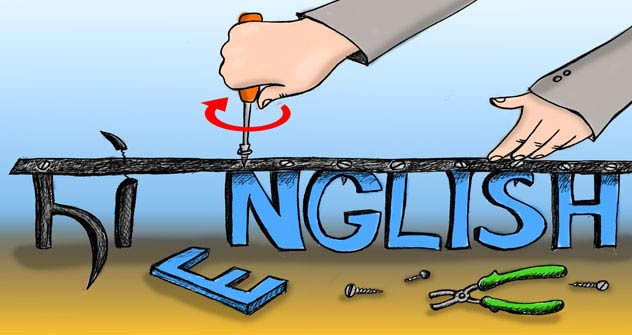 With an English-speaking population that outnumbers the US and Britain combined and new Indian English words flooding the lexicon, India could end up re-scripting the rules on how the language is spoken and written worldwide.

Web 2.0 is the one millionth word in the English language. According to the Global Language Monitor in Texas, US, the word refers to the second generation of the World Wide Web. For a word to officially enter the lexicon, it has to be used in books or on the internet 25,000 times.

However, not many know the Hindi word ‘Jai Ho’ (Be Victorious) is the 999,999th word. This is no freakish chance; the explosion of words in the English language reflects the extraordinary rate of borrowings from foreign languages, including Indian.

English is the language that Shakespeare used and George W. Bush abused. Now Indians are giving it their own flavour. Professor David Crystal, one of the world's foremost linguists, says people will effectively have to learn two varieties of the language – one spoken in their home country, and a new kind of Standard English which can be internationally understood. The English spoken in countries with rapidly-booming economies, such as India, will increasingly influence this global standard, he says.

“In future, users of global Standard English might replace the British English ‘I think it's going to rain', with the Indian English, 'I am thinking it's going to rain," argues Crystal, the honorary professor of linguistics at the University of Wales, Bangor.

“In language, numbers count. There are more people speaking English in India than in the rest of the native English-speaking world combined. Even now, if you ring a call centre, often it's an Indian voice you hear at the end of the phone. As the Indian economy grows, so will the influence of Indian English,” he says.

Sexy or not, the sheer weight of numbers is moving the odds in India's favour. At least 600 million Indians are able to read and write English, and the rest are following fast. Fuelled by a throbbing economy and a rapidly growing higher education sector (again, where the medium of discourse is – unfortunately or otherwise, whichever way you look at it – largely English), a bold new dialect is taking shape in India, giving tough competition to the ‘proper’ British.

For this growing Indian English dialect, or Hinglish, as it is sometimes called, to find acceptance by the rest of the world, India first has to become a world player. Linguistic status comes from economic and cultural leadership and India is showing promise that its global profile will only grow in decades to come.

For many people outside India, the first port of call for contact with Indians is the call centre. However, these are of minor significance now as the country has moved up the value chain. There is a lot more happening which is moving the global compass in India’s direction. For instance, much of the world's software is written here; many of the global car companies get their cars designed in engineering hubs based in Bangalore; the world's leading financial companies offshore their work to MBAs and chartered accountants in Mumbai; Reuters has moved its editing operations to India; and Indian lawyers do legal research overnight so American lawyers have their case ready to argue in US courtrooms the following morning.

There’s more. According to Julian Assange, Indians form the largest group of financial contributors to Wikipedia; daily texting exceeds the numbers in the UK and US; 2.5 billion people watch Indian movies compared with 1.5 billion who prefer Hollywood (Mithun Chakraborty’s popularity among Russian baby boomers remains unchallenged) and Indian movies are increasingly catering to an international market.

Clearly, if China is the world’s shop floor, India is becoming its think tank.

Plus, there is history. Every Indian knows about the massive British loot (again, a Hindi word) from India, but less well known is the large number of words from Indian languages that entered English.

The evolution of a language can be influenced by any number of factors. Consequently, not even the supercomputers at Global Language Monitor’s Texas labs can predict what shape Indians will give English in the future. However, one thing is abundantly clear: in the 21st century the New Delhi drawl rather than the New York twang will be rolling off people’s tongues.

And if you are still here, greenwashing is the 999,992nd word to enter the English lexicon, and is defined as the rebranding of an old, often inferior, product. Now, that’s handy to describe the Gandhis.