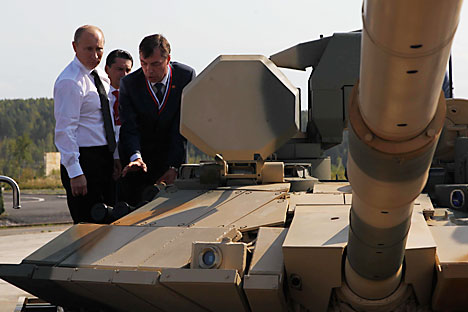 One of the highlights of the recent international exhibition of weapons and military hardware in Nizhny Tagil was undoubtedly the modernised T-90S gun-missile launcher-armed tank. Russian Prime Minister Vladimir Putin climbed into its turret without worrying about getting his starched white shirt dirty.

Putin liked the tank very much – especially since Andrei Terlikov, acting chief designer of Uralvagonzavod, which produces the combat vehicle, went out of his way to promote his product. He said the T-90S had a more powerful engine and stronger defences than previous models. In addition, it has a steering wheel system, an automatic gearbox, night-vision instruments, a rear view camera, modern communications and navigation systems, an air conditioner, laser range scope and gun sight.

All that is true.

The T-90S has a new turret that specialists refer to as a module, because it can be installed on any caterpillar platform and, if necessary, be replaced with a more modern design. Even today, it is full of modern combat control systems. For example, it has a Sosna-U combined gun sight designed and produced at the Belorussian Peleng enterprise, allowing it to hit any target by day or night from a distance of 5 km. The tank has a circular vision system enabling the commander and the gun layer to see the situation all around the machine and the driver to see what is happening to the right and left and even behind the tank, without sticking his head out of the hatch and risking being hit by a stray bullet.

Designers claim that the tank has the best dynamic protection system in the world, which breaks the core of armour-piercing projectiles, that previously could only be stopped by thick armour. The thickness cannot be increased infinitely, however, as the tank would then be too heavy to move. For protection against cumulative and jet ammunition, it has an Arena system that blows up the shells as they head for the T-90S. There are a lot of other devices on the new machine, including an information and control system into which the data on previously reconnoitered targets can be entered, whereupon one just has to press computer buttons to fire the gun. The computer will itself calculate and feed into the sighting device all the data for accurate and precise firing.

Yet the chief of the General Staff of the Armed Forces of the Russian Federation, First Deputy Defence Minister General of the Army Nikolai Makarov, did not exactly wax enthusiastic about the new T-90S at a meeting with journalists attended by this writer. “There are many things that we like about the modernised tank turret,” he said, “but we still have a lot of complaints.” The General did not disclose what the complaints were but one could guess.

Apparently, the military are unhappy with the power of the engine installed on T-90S, which is 1000 hp, or 24hp per metric tonne of its weight, whereas they wanted it to be 1500 hp. Actually, such an engine was on display at the exhibition in Nizhny Tagil. The 12N360 engine is 81.3 cm long, 130 cm wide and 82 cm tall. It was developed for the “object 195” tank, which the military rejected for some reason. The engine is much smaller than that used on the T-90S (where the motor is 1.5 metres long and 1 metre high). It takes several days to replace the engine, especially in the field. A fighting army is unlikely to have that much time at its disposal. But why the new 12N360 engine has not been put in the T-90S is a riddle. Perhaps because it requires a revamping of the entire engine section and that implies a serious cost that the defence ministry so far rejects? There is no answer as yet.

There are some other complaints. In modern combat, tanks are still the main strike force of land troops but not the only one. Besides, today they are highly vulnerable to anti-tank fire both from the surface and from the air. So, in addition to individual protection for every combat vehicle, it must also be protected by other combat systems. Tanks must be able to act in concert with diverse other forces. For example, together with armoured vehicles (such machines were also on show in Nizhny Tagil), with armoured personnel carriers, with drones, helicopter gun ships and even with A50 AWACS planes equipped with distant radar observation, detection and guidance functions.

A very simple argument: the T-90S tank can fire its ammunition from a 125 mm gun with a range of 5 km and the Sosna-U combined gun sight permits that, but it is virtually impossible to see the target in rugged terrain, not even with the laser range finder installed in the tank’s turret. That requires a drone and a computer in the tank that can receive the picture from the drone, providing the coordinates of the target, before adjusting the flight of the shell towards the target that appears on the computer screen. The T-90S lacks this vital device. The tank is also missing some other equipment that is essential in modern combat, including interaction with helicopters and AWACS planes.

Of course, the question is always in what battles and against which enemy all these modern cutting-edge bells and whistles would be used. As experience of warfare in Iraq, Afghanistan and Libya and Russia’s experience in the North Caucasus shows, comprehensive use of armour, involving drones and helicopters, is not very useful when the enemy is not very powerful and does not have modern weapons systems. Having said that, all this would have come in handy during the August 2008 war in South Ossetia against the Georgian aggressors.

The Israeli army’s Merkava tanks, for example, do not enter urban neighbourhoods where terrorists have dug in unless they have helicopter gunship support, although their enemies do not have the most modern of weapons. The reason is obvious: Israeli generals care about the lives of their soldiers. In order to protect them in a war in which advanced hardware and support systems are not used, modern, cutting-edge weapons are needed.

This appears to be the aim of the present defence ministry leadership when they raise complaints even with regard to such a wonderful tank as the modernised gun-missile launcher-armed tank T 90S which Vladimir Putin liked so much at the exhibition in Nizhny Tagil.