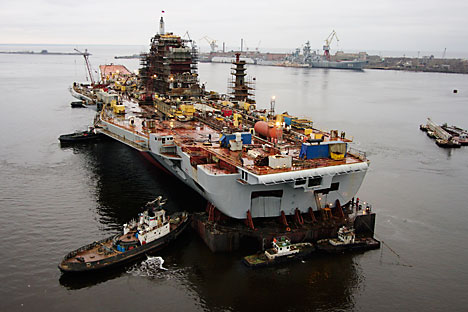 President of the United Shipbuilding Corporation Roman Trotsenko has announced the completion date of a key export order.

For everyone who is engaged in giving the finishing touches to the Vikramaditya aircraft carrier or is a member of the Indian Navy’s group of observers at the Sevmash plant, this week began with a comprehensive inspection. According to the press service of the Russian largest defence shipyard, on Monday 19 September, a delegation from the Indian Navy’s joint staff, led by Rear Admiral Nadela Niradzhan Kumar, chief of the shipbuilding and procurement department, arrived at Russia’s biggest naval shipbuilding enterprise, in Severodvinsk.

Together with Roman Trotsenko, President of the United Shipbuilding Corporation, which includes the best-known Russian shipyards, he looked at how work on the ship was progressing. Sevmash chief engineer Alexei Alsufyev briefed him on advances since the previous inspection. Taking part in discussing aspects of production and organisation were deputy general directors of the enterprise Mikhail Budnichenko, Sergei Novosyolov and Andrei Monogarov and head of the Indian Navy group of observers Mr. Swaminatan.

The chief of the Indian delegation, Vice Admiral Kumar, expressed satisfaction with the progress in modernising the aircraft carrier, considering the ship to be more than 85% ready. This was made possible by the efforts of the management of the plant and the United Shipbuilding Corporation, he is quoted as saying by the shipyard’s press service. “I am very grateful to Mr. Trotsenko for directing the shipbuilding process, to Rosoboronexport, to the Nevsky Design Bureau and to Sevmash contractors.”

Roman Trotsenko responded with a serious commitment. After thanking the customer, the Indian Navy, for their confidence and understanding of the problems that have cropped up at various stages during the fulfillment of the contract, he said that the final stage of the modernisation would be carried out with the utmost thoroughness, in strict accordance with the technology and particular attention to quality.

“Today, the work is going ahead on schedule,” Trotsenko confirmed. “The technical problems that arise are resolved, largely thanks to Rosoboronexport, which always supports us. I am sure that the ship will be delivered to the customer in December 2012.”

Note
Sevmash got a new General Director three months ago. In June 2011, Andrei Dyachkov, who formerly worked at the Severodvinsk shipyard and knows it well, was appointed to the job. His production experience will be augmented by the organisational skills he acquired during the two years he served as General Director of the Rubin Central Design Bureau (St Petersburg). Mr. Dyachkov is currently combining the two jobs.