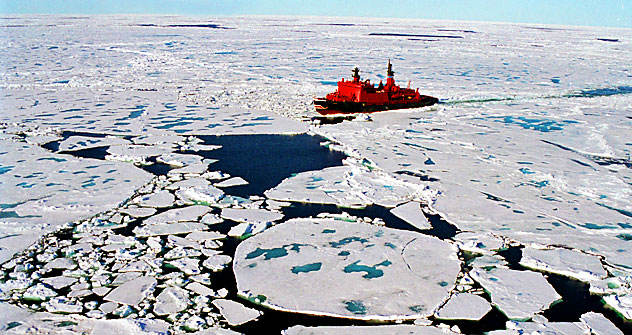 This year, the area of ice in the Arctic waters has dropped to record lows. The sea ice minimum hit a new record low in September. Sea ice covered less than 4.2 million square kilometers, decreasing by a factor of two in the last 30 years.

For now the lack of comprehensive communication and navigation systems, as well as problems with transport access to ports, is what stands in the way of the Northern Sea route becoming a fully-fledged thoroughfare. However, the main prerequisite has been met – ice-free water, suitable for commercial trips. Twelve cargo ships have already passed through this route.

This year, the area of ice in the Arctic waters has dropped to record lows. The sea ice minimum hit a new record low in September. Sea ice covered less than 4.2 million square kilometers, decreasing by a factor of two in the last 30 years.

This opens new opportunities for navigation and the extraction of minerals in the Arctic, the vice president of the Russian Academy of Sciences, Nikolay Laverov, said in his recent speech at the Second International Arctic Forum “The Arctic: Territory of Dialogue”, which took place in Arkhangelsk.

According to the minister of natural resources, Yury Trutnev, 279 oil and gas fields are concentrated in Russia’s Arctic zone. Hydrocarbon production accounts for 11% of national revenue, said the minister, and 40% of total energy exports are provided by the Arctic region.

Meanwhile, today practically the entire volume of production is carried out on continental fields, and offshore deposits remain “out of reach”. The reason is simple. Development of these fields is more costly. Locally produced oil has high sulphur content and is, therefore, cheaper – offshore oil production is often simply unprofitable. This problem may be resolved by the proposals made by the Ministry of Energy, which include the abolition of current taxes and the introduction of a single tax on additional revenue for companies engaged in offshore drilling. The new system, which will make the development of offshore fields profitable, may come into effect in 2012.

However, in addition to issues concerning production, transportation continues to be one of the vital issues. In this regard, the Northern Sea route has very few competitors in terms of efficiency. Indeed, when traveling through the higher latitudes, distance is reduced by 34% in comparison with the so-called reference route of Rotterdam to Yokohama through the Indian Ocean. Travel time is reduced from 33 to 22 days, and fuel economy reaches 800 tons per “average” ship.

In the meantime, cargo traffic through the high latitudes is only 10% of the traffic volume that passes through the Suez Canal.

The problem is that, pilotage rates are currently quite high. Issues concerning quality communications and navigation over the entire Northern Sea route have not been fully resolved. There are also questions concerning transport accessibility to ports as the existing railroad system is not yet equipped for large volumes of cargo. This year’s volume of cargo traffic amounts to 680,000 tons, and forum participants are confident that it will reach a million tons, exceeding last year’s indicator by five times. As of today, the icebreaker fleet has conducted 21 escort operations along the route, compared to 10 last year.

At the same time, Russia could be left without icebreakers by 2016. It is necessary to start updating the existing ships immediately. Currently, 10 vessels are engaged in high latitude navigation, which already shows certain progress. According to the transport minister, Igor Levitin, the three-year budget includes 20 billion rubles for the construction of a new nuclear-powered icebreaker. He also said that funds have been allocated for the construction of three shallow-draft diesel-powered icebreakers which, because they are part of a newer and more-advanced class, will be able to replace five old vessels.

Questions regarding legislative support also exist. A corresponding bill on the Northern Sea route has already been introduced in the State Duma. During the forum, the transport minister asked the minister of emergency situations, Sergey Shoigu, and special presidential representative for international cooperation in the Arctic and Antarctic, the deputy, Artur Chilingarov, to make sure the bill is approved in the current fall session.

On the sidelines of the summit, the minister told journalists that issues concerning the cost of ice escorting, enshrined in law, will be fully regulated by the state. “The new law will establish that ice escorting is a monopoly sector. Due to this fact, the law stipulates that tariffs will be regulated by the Federal Tariff Service. In other words, the price of escorting will no longer be set by the owner or the renter (of the vessel – Rossiyskaya Gazeta); there will be a government-established rate for vessel escorting,” said Levitin.

In order to make the Northern Sea route a fully-fledged thoroughfare, it is also necessary to ensure reliable communication and navigation throughout the entire route. This was discussed by the emergency minister, Sergey Shoigu, who underlined that “issues concerning reliable and uninterrupted transportation are becoming especially important due to the likelihood of the route’s development. But a modern system of communication and navigation needs to be created.” Meanwhile, in the course of its creation, it is planned to rely on “domestic achievements in science and technology, and domestic production,” stressed the minister.

New towers and relay stations for the transmission of GLONASS signals are already being set up today and will fully secure the Northern Sea route in the near future, said the transport minister, Igor Levitin.